Another day, another phony labor shortage.

The New York Times on Sunday published an article with the startling headline: “Lack of Workers, Not Work, Weighs on Utah’s Economy.”

“After eight years of steady growth, the main economic concern in Utah and a growing number of other states is no longer a lack of jobs, but a lack of workers,” the Times reports.

The story goes on to report a number of anecdotes about alleged labor shortages. One construction company, for instance, claims it has raised its starting wage by 10 percent to $17.50 an hour but has been unable to attract sufficient workers.

But data is not the plural of anecdote. And the actual data don’t support the idea of a labor shortage.

While there has been some upward movement in recent months there has not been the kind of dramatic upswing in construction wages that would be associated with a genuine labor shortage. If anything, the recent movement looks very much like the normal volatility within the normal range.

The average weekly earnings of all employees engaged in construction in Utah stood at $970.52 in April, 2017, according to the Bureau of Labor Statistics.  That a rise of just 3.25 percent from a year ago. Four years ago, average weekly earnings were $980.39. Those numbers are not adjusted for inflation, which means the actual decline in wages from four years has been even steeper.  Between then, the numbers have bounced around a lot and mostly been lower. 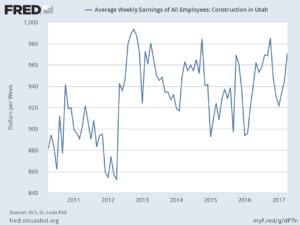 Average Weekly Earnings of All Construction Employees in Utah

Data on average hourly earnings also fail to show anything that looks like a labor shortage. According to the Bureau of Labor Statistics, average hourly wages in April were up just 2.7 percent compared with a year ago.  That’s a far cry from the 10 percent reported by the company mentioned in the New York Times article. 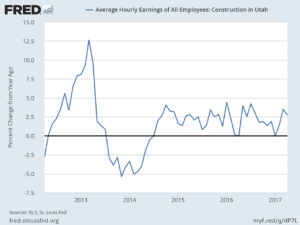 Much deeper into the story, the New York Times actually explains that the supposed labor shortage is really nothing more than workers reacting to a lack of wage growth.

Companies in Utah, as in the rest of the country, were slow to raise wages in recent years. At first there were plenty of available workers. But by the end of 2015, a report by Utah’s Department of Workforce Services concluded that inadequate wages had become a key reason companies were struggling to find employees.

“It was as if employers hadn’t adjusted their approach to the labor market” as the economy recovered, said Carrie Mayne, the department’s chief economist.

In other words, companies are not offering wages that are high enough to attract workers. There is no “lack of workers”–there is only a lack of will to pay workers enough to get them to agree to work.

In short, what we are seeing is something more akin to a wage strike by employers who hope that if they hold out long enough against waging raises the government will step in and solve the problem.

How could the government do that? By opening up the country to more immigrants.

That is really what’s at the bottom of these alleged labor shortages: a campaign to get the government to loosen up on immigration so that employers can keep paying low wages.