The video shows several types of dairy-milking equipment, including the manpower-saving robots and the manpower-intensive rotary and stall milking machines.

The video does not talk about the cost of labor or the efforts that dairy farmers take to detect fraudulent work-permits by migrants. In Yarrabee’s case, the farm owner told the Des Moines Register that the alleged killer was an “employee in good standing.”

But many migrants use fake identities to stall or foil the federal government’s E-Verify System, which tells employers if a job-applicant is allowed to work in the United States.

Farm owner Dane Lang explained how he calculates the most effective farm insurance program, which he needs to protect himself against sudden drops in milk prices. 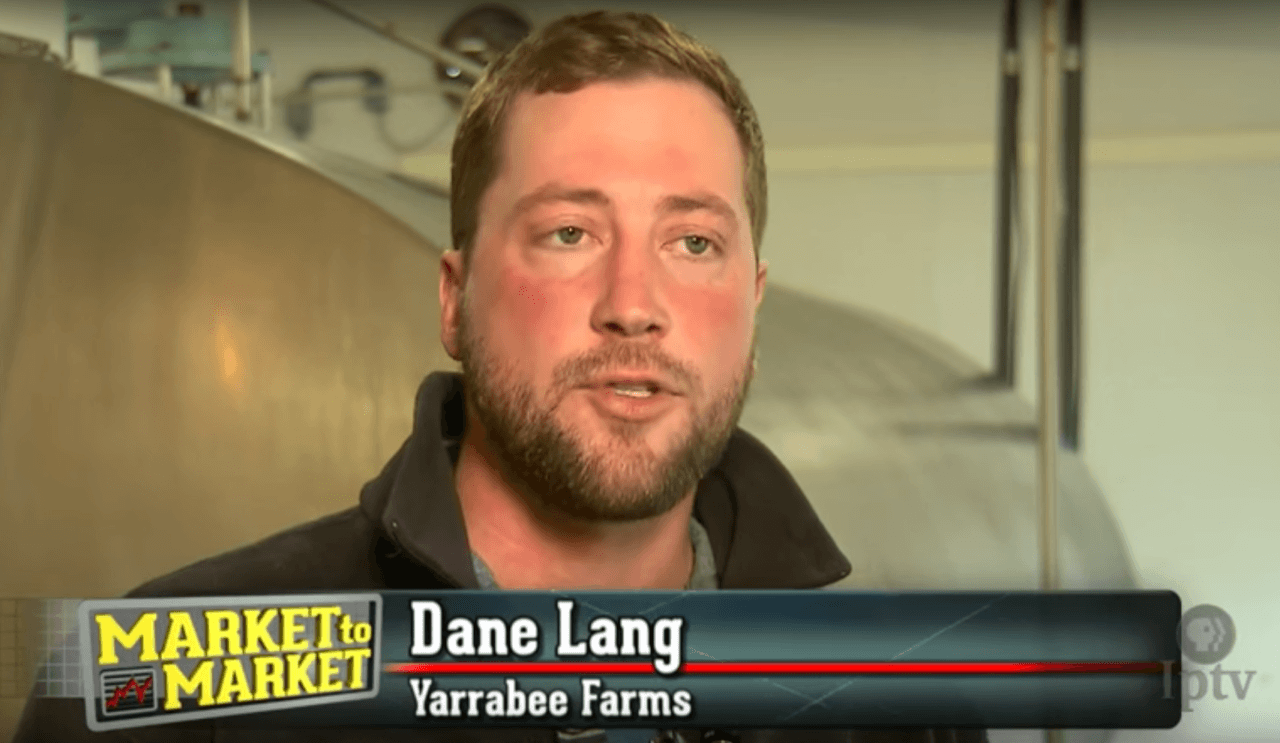 This image shows Lane using a tractor to unload food in front of penned cows: 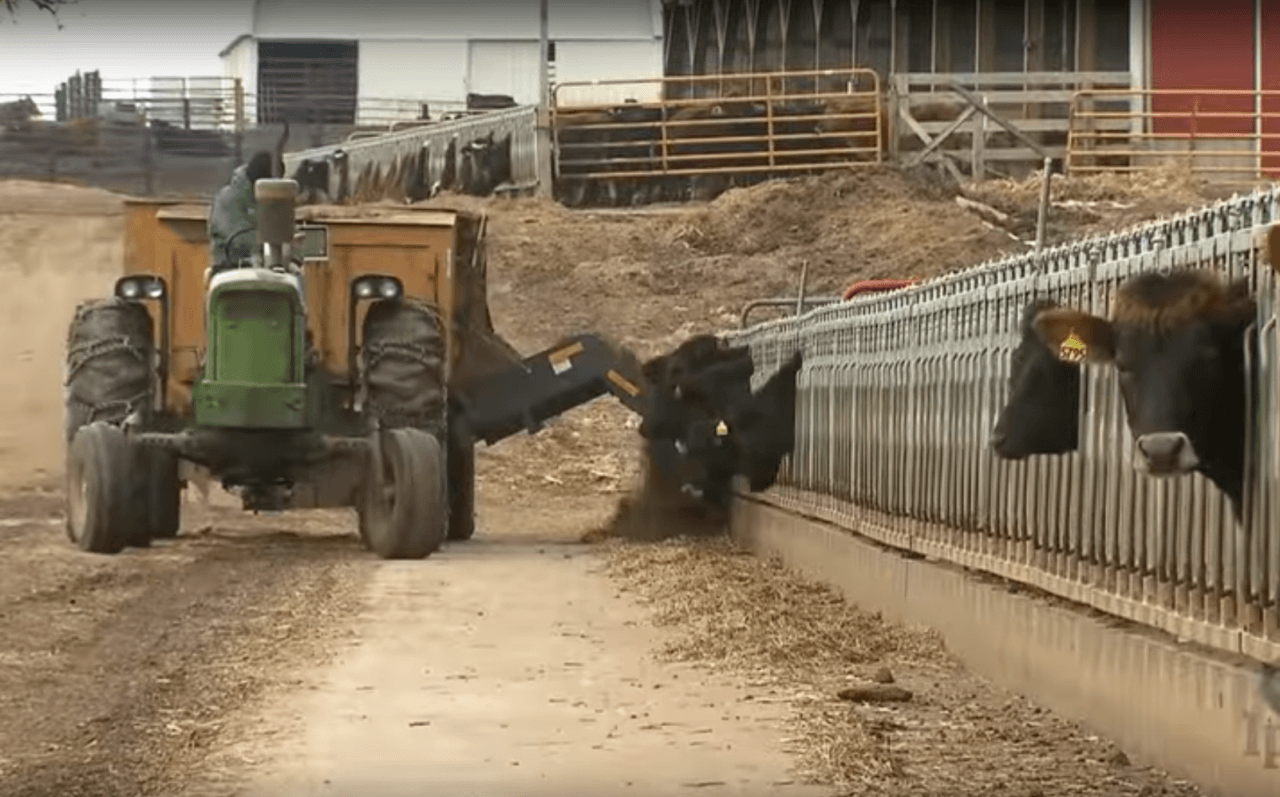 This image shows a dairy worker placing suction cups on cows’ teats. The cows have backed themselves into stalls above the farmhand. This labor-intensive task needs to be performed two or three times per day, 365 times per year, regardless of weather. Yet the wages are low, in part, because the large volume of milk production ensures that milk prices are relatively low. Few Americans want to do this low-status work, partly because the job is mostly performed by low-status — but tough and hard-working — illegal aliens. 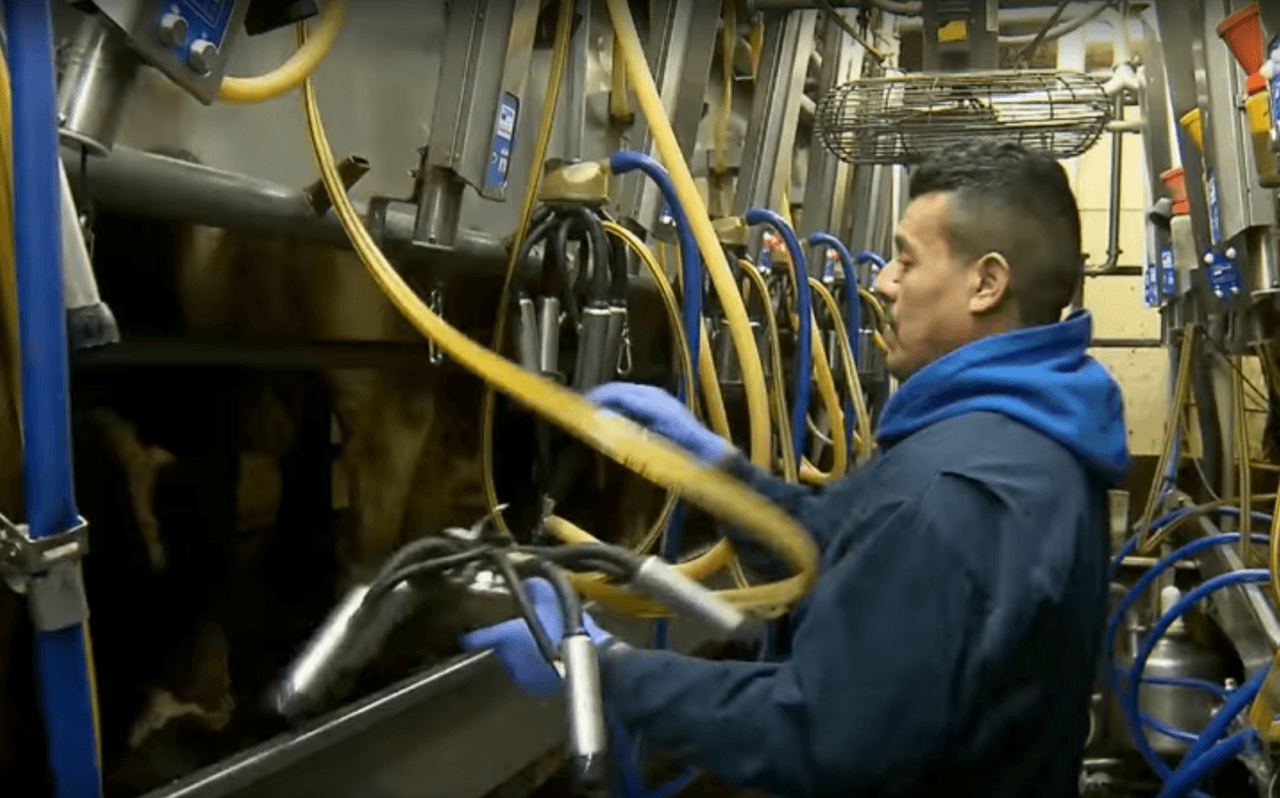 The cows’ teats and the equipment need to be kept clean amid mud and feces, in the hot summers and cold winters. The Iowa video suggests — but does not confirm — that this scene shows workers at Yarabee farms. 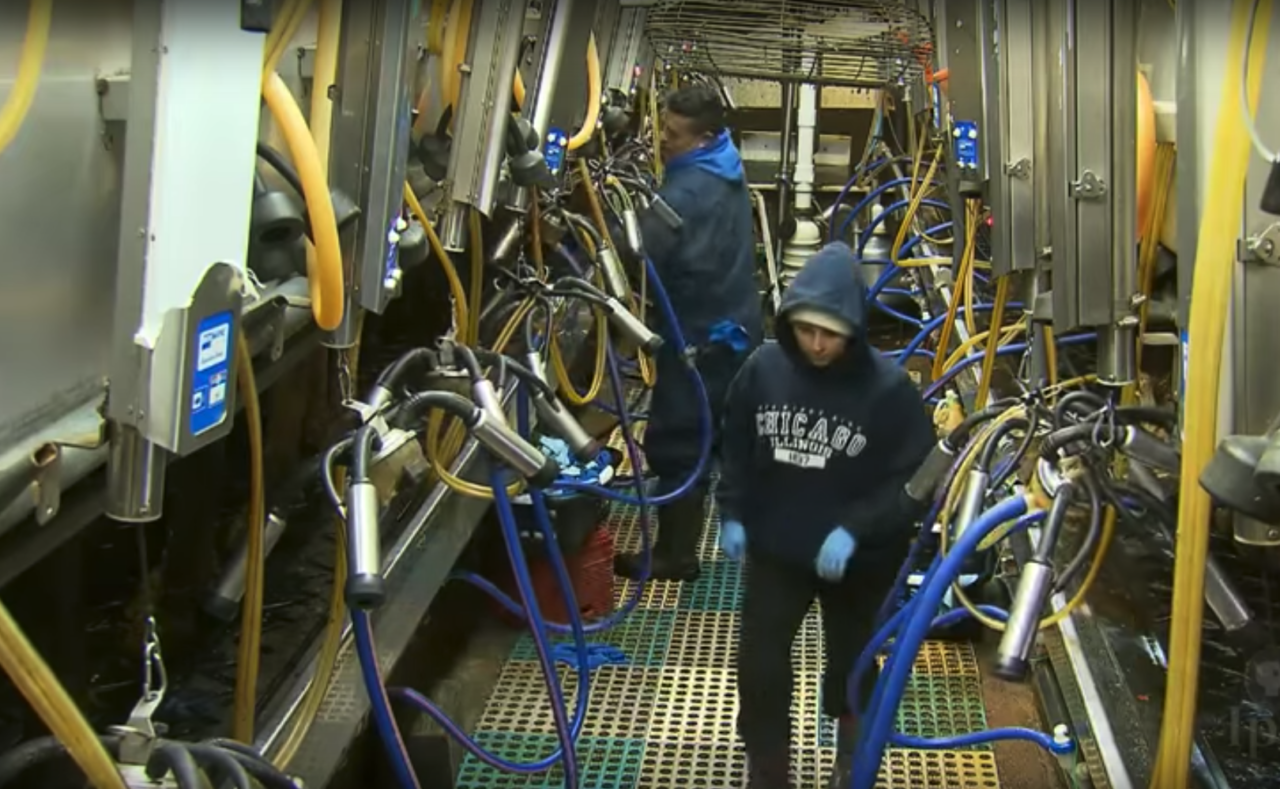 This alternative cow-milking machine is called a rotary milker, and it is helps cut labor costs by allowing fewer dairy workers to milk the cows. The cows walk onto the circular platform and then back into their stalls, while the machine slowly rotates in front of the dairy worker 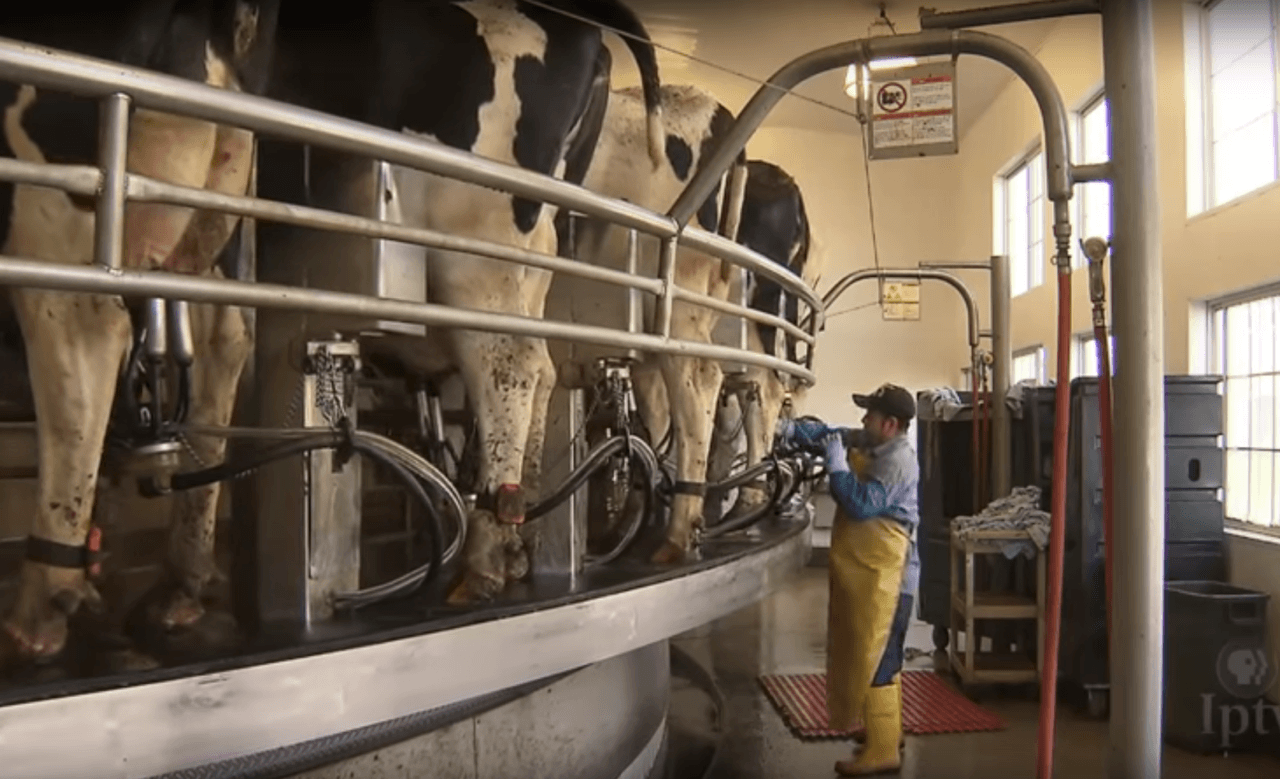 This other machine is one of the new robot-milkers which minimize the number of dairy workers needed on a farm. This “Astronaut” machine is designed by Lely, a European firm which assembled its robot in Pelly, Iowa. The U.S. government does not provide any subsidies or incentives for Americans farmers to use this labor-saving machinery, which would reduce the number of migrant farm-workers — plus their spouses and children — who move into rural areas. 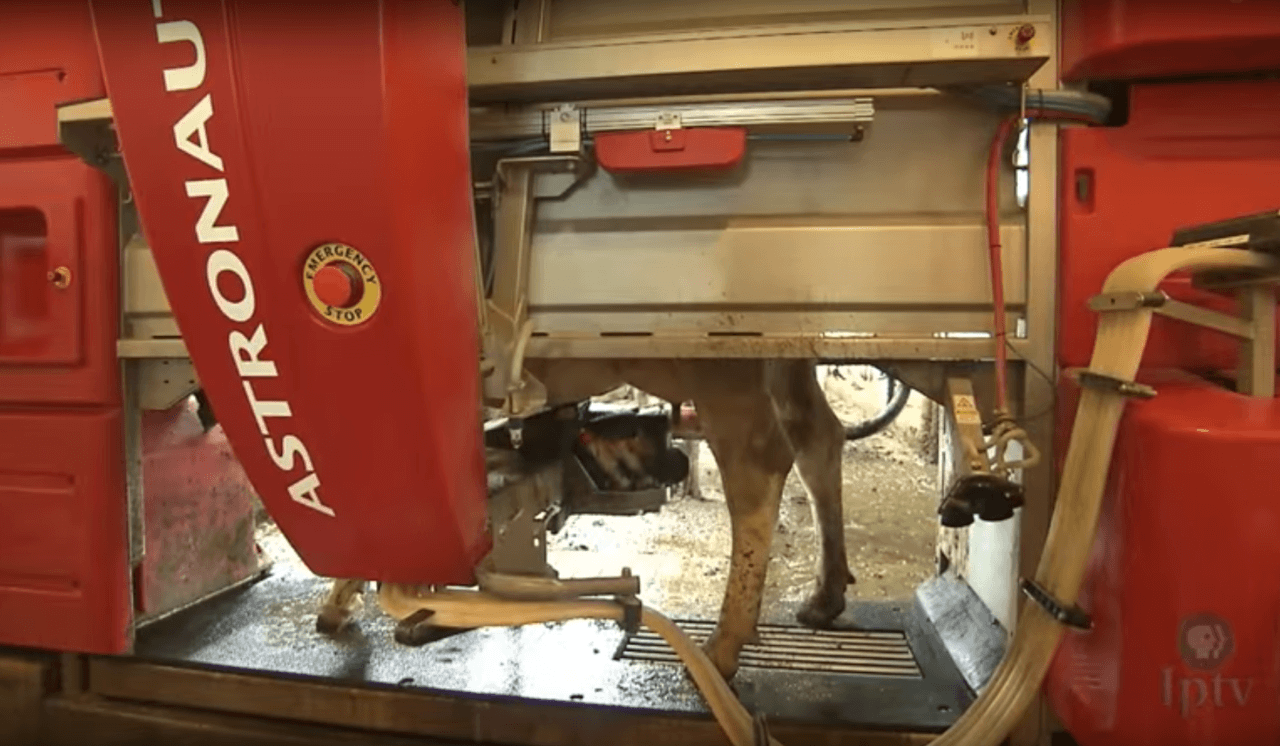 Lely and other firms who make robot-milking machines has seen slow growth in the United States, largely because dairy farms have had ready access to cheap illegal-alien dairy workers during the tenures of Presidents George W. Bush and Barack Obama.

We’ve really noticed a drop-off in [job] applicants. Several years ago, you’d have several a week applying for work, and now you might get one a month, maybe.

The remaining population of perhaps 1 million illegal-immigrant workers is demanding — and getting — higher wages even as milk prices remain at painfully low levels for farmers. “I personally have all the workers I need,” Wiersma said, but:

We have had to increase wages. I know other dairymen have too …You almost end up almost robbing your neighbor to get your cows milked and that doesn’t make for that great of neighborly relations. It not really overt but it is what kind of happens, and the employees know it and those who are looking for a little bit better paycheck or little bit different situation will go — while they are working for you – they’ll go up the street and check around and see what the availability is, and so we’re almost scavaging workers from each other. It is not real bad yet, but if our labor pool dries up, it could get a lot worse.

The rising wages have proved so shocking that farm companies are even buying labor-saving machinery, including robotic-cow milkers built by Americans in Pella, Iowa. Wiersma said:

Automation is starting to really play in because of this issue. I know there is a lot of interest in milking robots … it is a milking station that the cow goes to itself and the milking unit is attached to the cows and she is milked that way… It is quite a radical way from how things have been done, but yes, the potential lack of workforce has really upped the interest in robotic milking and technology in general.

Lely and other manufacturers advertise their products via Youtube.com:

But Wiersma prefers to cut his costs by hiring more cheap guest-workers instead of buying labor-saving robots from American workers:

We really need a system of legal migrant workers to help us in agriculture. It is really the only thing that is going to matter to us. There needs to be a legal, sensible, reasonable system to allow migrant workers to come in and work, and not seasonable like the field workers. Dairy work is year-round and there is no program to supply us with year-round workers.

Farm companies have not asked Congress for research funding or lending programs to help them buy labor-saving machines, and farm owners are pushing legislators to cut their manpower costs by letting them hire H-2A visa workers.

That lobbying paid off on July 25, when Kansas GOP Rep. Kevin Yoder helped pass legislation that would allow dairy firms to get cheap visa-workers via the seasonal H-2A program. If the legislation passes this Fall, sales of Iowa-manufactured Lely robot-milkers will likely stall.