“There are currently 62 vessels anchored outside of the Los Angeles and Long Beach ports,” Khachatryan exclusively told Breitbart News. “The number has been consistently over 50 vessels for weeks and has gone up to as high as 90.”

Khachatryan explained the vessels are waiting off the coast to unload their containers because the shoreside receiving areas are full.

When asked why the ports are full, Khachatryan responded there are a lack of truck drivers picking up the freight once they have been offloaded.

Khachatryan also noted the backlog at the ports is caused by delays in Asia.

“The transit time from Asia has increased by some 4-6 weeks,” he said. When the vessels reach America, the ships are often waiting two weeks to unload before they turn around and travel back to Asia. The two-week delay is causing the ships to miss their next load in Asia, further exasperating the delays.

“As a result, many importers are curbing imports earlier than usual because the goods are unlikely to make it to the shelves by the Christmas season,” Khachatryan continued. “There will likely be limited inventories available for sale for Black Friday and Cyber Monday.” 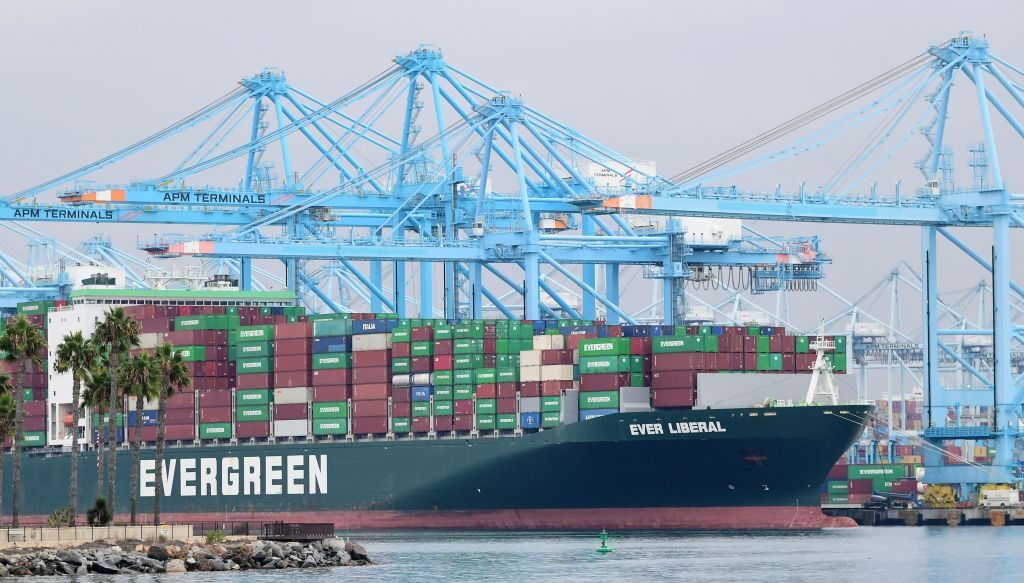 The Evergreen cargo ship ‘Ever Liberal’ filled with containers is seen at the Port of Los Angeles on October 6, 2021 in San Pedro, California. A record number of cargo ships have been stuck in limbo off the southern California coast waiting for entry to either the Ports of Los Angeles or Long Beach. (FREDERIC J. BROWN/AFP via Getty Images)

On top of the truck driver labor shortages, Khachatryan explained the Communist Chinese dictatorship is rationing electricity, which is further delaying goods arriving in the United States.

“The Chinese government is rationing electricity which will result in lower production and a badly needed break for the U.S. infrastructure to clean up the backlog over the next few months,” he said.

Walmart, Costco, Target, and Ikea have already hired private vessels to ship goods to smaller ports to avoid the backlog at ports reportedly fueled by a lack of truck drivers, moves which are bound to impact prices for the consumer.

Vice president of transportation at Home Depot, Sarah Galica, told the Wall Street Journal on October 10 such an idea of private shipping started as a joke. “It was almost started I think as a joke,” Galica said. “Let’s just charter a ship.”

The end result of the supply chain crisis will raise prices for consumers. In August, inflation rose 5.3 percent compared to 2020. A Moody’s economist told the Post Friday that inflation is costing American workers and families an additional $175 a month.

“For households earning the US median annual income of about $70,000, the current inflation rate has forced them to spend another $175 a month on food, fuel and housing,” the Post reported on Mark Zandi’s findings.