A.P. Moller-Maersk A/S, the world’s largest shipping company, announced Wednesday it would pay $1,000 bonuses to each of its 80,000 employees after projecting a record $17 billion in profits for 2021.

Those soaring profits were due, in no small part, to the skyrocketing costs of shipping from this year’s massive supply disruptions.

Bloomberg News reported seeing a Maersk internal memo that said bonuses would be paid to all employees in their December or January paychecks except the top 400 management staffers, who have their own bonus program.

“In a massive team effort our colleagues across the globe have risen beyond the call of duty to respond to our customers’ needs. And this has not been easy given the unknowns and disruptions that we had to deal with, the impacted supply chains, congestions, and capacity shortages,” CEO Soren Skou said in the memo.

Bloomberg recalled Maersk paying a similar bonus to most of its staff in 2020, when the company emerged from several years of losses to post a $2.9 billion profit. The company just posted the best third quarter in its 117-year history. 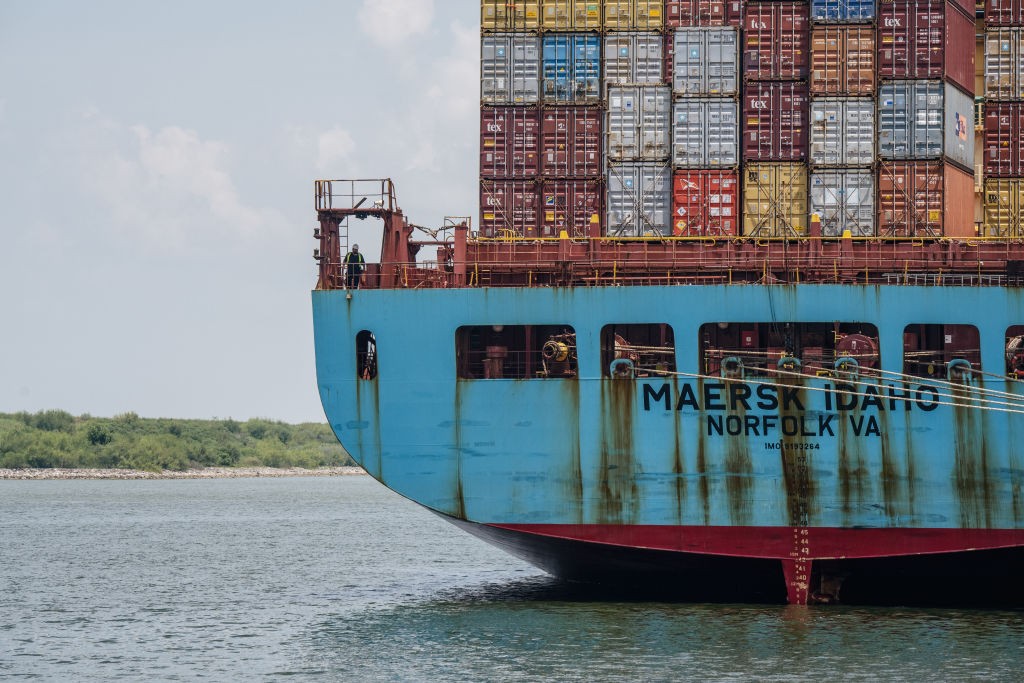 The Maersk Idaho container ship is shown at the Port of Houston Authority on July 29, 2021 in Houston, Texas.  (Photo by Brandon Bell/Getty Images)

Maersk projected record year-end profits at the beginning of November and also predicted the supply-chain chaos that created so much hard work for its employees – and left the company’s coffers bulging – would continue through at least the first quarter of 2022.

Maersk chairman Jim Snabe anticipated this week that the supply crisis would last until the middle of next year.

“You have higher demand and lower capacity, not because we don’t have enough vessels, but because they are not sailing because of congestion. We have to balance that out. We think this will happen somewhere mid-next year, but maybe not before,” he explained.

Snabe, who also chairs the German mega-conglomerate Siemens, promised that both companies would “deliver” throughout the crisis, and both have the resources to meet rising demand for numerous goods spurred by the great international transition to working at home.

Maersk also credited a ten-percent surge in demand from American, European, and Asian customers for its 500 percent increase in revenue, but exploding costs for shipping containers clearly took center stage. On some routes, the cost of a shipping container has increased by over 700 percent in the past 18 months.

Maersk has primarily been known for ocean shipping, but in November it announced it will purchase a German company called Senator International with extensive air and rail capacity, plus much-needed warehouse space and distribution capacity. Senator International’s existing business model took a hit when chip shortages slowed down production by German automakers, who were among its top customers.

“By strengthening our footprint within air freight, we become a sizable player able to add even more flexibility to our customers’ supply chains and further support their needs for truly integrated logistics across ocean, air, and landside,” Maersk said.

Senator International noted when announcing the acquisition that its air freight capabilities would help Maersk appeal to pharmaceutical clients and tech companies.