Zelensky spent nearly an hour and a half with reporters at a press conference in Kyiv on Friday following what has become a controversial phone conversation with President Biden on Thursday night. While the official readouts from both Washington and Kyiv depicted the call as productive and friendly, a CNN report based on anonymous sources described the call as frustrating and tedious, featuring harried warnings from Biden that Kyiv would be “sacked” and exasperated requests from Zelensky for the president to “calm down.”

Both the White House and the Ukrainian president’s office have rejected the CNN report, and Zelensky himself, during the press conference, repeatedly expressed gratitude to Biden without addressing the acute challenges the CNN report claimed exist in the relationship.

Zelensky did tell reporters that he spent much of the call emphasizing to Biden that telling the world that Russia would imminently invade Ukraine – something Kyiv has repeatedly stated there is little material evidence to believe – could lead to economic devastation in the country that would, in turn, increase the probability of a full-fledged Russian assault.

“I mentioned this to President Biden … we need to stabilize the economy of our country because of those signals which say that tomorrow there will be war,” Zelensky said, “because these signals were sent by even leaders of the respected countries, sometimes they are not even using diplomatic language! They are saying, ‘Tomorrow is the war.'”

“This means panic on the market, panic in the financial sector … how much does it cost to our country?” Zelensky asked.

The president then put a price tag on global fears of war in his country.

The BBC’s Ukrainian coverage of the press conference reported that Zelensky meant 12.5 billion hryvnia. The president lamented that the country had to use up part of its gold reserves to stabilize the currency, which he said had reached its highest level in a decade.

The president also complained that the coverage is not based on reality – particularly concerns for Kyiv, triggered by Biden pulling the family of U.S. embassy staffers out of the capital – and urged reporters to visit and report from the ground.

“We’ve talked to the president [Biden], we think that there has to be a balanced approach,” Zelensky said. “I am not saying that he is influencing American media, they are independent, but the media policy – there has to be balance.”

“If they want to know what the situation is, they can come to Kyiv. Do we have tanks on the street? No,” Zelensky continued. “The feeling is, if you’re not here, the feeling is … the image that mass media create is that we have troops on the roads, we have mobilization, people are leaving for places – that’s not the case.”

The president did not deny the presence of Russian troops near the Ukrainian border but insisted that the risk of an invasion was less than it was during the same time of year in 2021, when his country was not making international headlines. 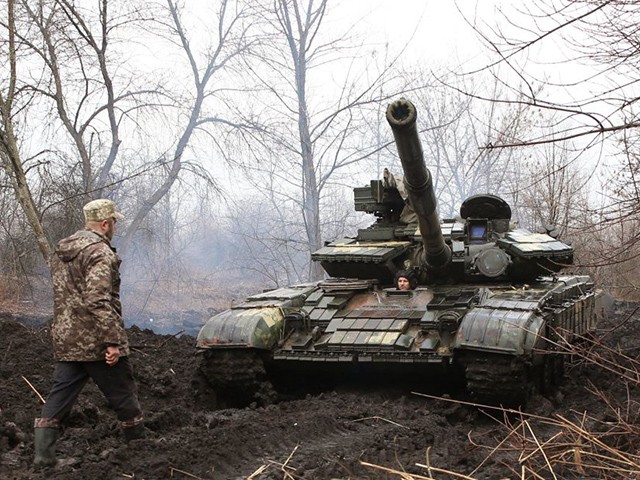 Ukrainian servicemen work on their tank close to the front line with Russian-backed separatists near Lysychansk, Lugansk region on April 7, 2021. (Photo by STR/AFP via Getty Images)

“I don’t think the situation is more intense than it was at that time, at peak time in 2021,” Zelensky said. “There was no such coverage at that time of Ukraine.”

Zelensky also asserted that the threat of a full Russian invasion was “constant” but that the escalation that the West fears by Moscow “already happened.”

“We have been talking about this for eight years now,” he lamented, referring to the invasion of Ukraine by Russia in 2014 that resulted in the colonization of Crimea.

Zelensky fielded a question from a reporter asking if he was lying about the allegedly imminent Russian threat to preserve his country’s economy.

“It is very strange that I am being suspected of something. I think, in my life, I haven’t done anything to be suspected of things. I think you mistake me for another president of Ukraine,” Zelensky answered. “I think first should come the human being, then comes the economy. For me, the question of the possible escalation is not less acute as for the United States and other partners.”

“I’m not managing the country as in your film, Don’t Look Up,” he continued, referencing the recently released Netflix film. “We’re looking up … [but] we have been in this situation for eight years so we should not just be looking up, we should be looking at the ground … we may lose the economy of our country.”