Citizens traveling over Thanksgiving weekend are in for more pain at the pump in President Joe Biden’s (D) America.

In a report on Tuesday, GasBuddy said the “Projected average price of $3.68 on Thanksgiving Day will break record set 10 years ago.”

Citizens getting ready to travel for the holiday will reportedly experience gasoline prices at their “highest seasonal level ever for the weekend,” according to the fuel savings platform.

“The national average is projected to stand at $3.68 on Thanksgiving Day – nearly 30¢ higher than last year, and over 20¢ higher than the previous record of $3.44 set in 2012. But that won’t slow many down, with 20% more Americans planning to hit the road this year,” the report said, adding the number of people traveling over the weekend rose from 32 percent in 2021 to 38 percent.

During a recent economic speech in New York, the president claimed, “Today, the most common price of gas in America is $3.39 – down from over $5 when I took office.”

However, “When Biden took office, gas prices were nowhere near averaging $5 per gallon nationwide. In January 2021, when he was inaugurated, gas prices averaged $2.38 per gallon, according to the American Automobile Association (AAA),” Breitbart News reported.

It is correct gas prices have dropped, however, that was after they soared to a record high of a national average of $5 per gallon in June, per AAA. 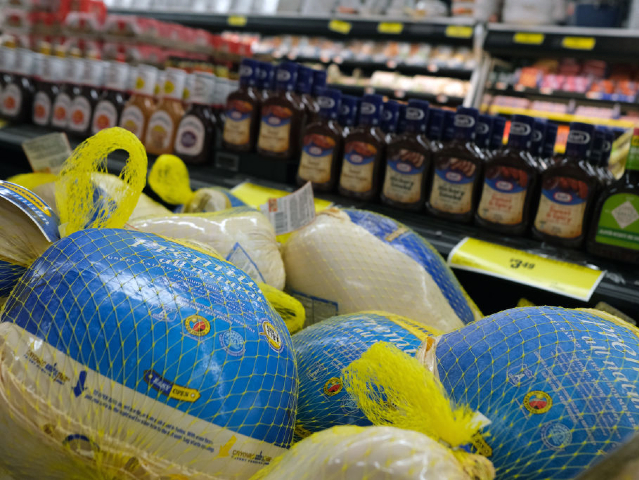 NEW YORK, NEW YORK – NOVEMBER 14: Frozen turkeys are displayed for sale inside a grocery store on November 14, 2022 in New York City. The price of turkeys, a staple for many Americans at Thanksgiving, is at record highs this year due to inflation and a rise in the price of feed among other cost issues. (Photo by Spencer Platt/Getty Images)

To make matters worse this holiday season, the rising cost of goods will affect Thanksgiving for the vast majority of Americans, according to a FinanceBuzz survey.

Eighty-six percent of Americans said skyrocketing food prices will make a difference when it comes to their Thanksgiving meal.

“This coincides with the reality of turkey — a staple of a traditional Thanksgiving meal — soaring in price, just in time for the holiday,” Breitbart News reported Tuesday.

Last month, one in five Americans were unsure if they would be able to afford Thanksgiving and one in four planned to skip it altogether to save money, according to a Personal Capital survey.