I don’t judge movies by their source material, so I won’t judge “Watchmen” by the amazing graphic novel from which it comes. When we pay our 12 bucks to see a movie, nobody hands us a book to go along with it, so the moral contract between consumer and story-teller is that the story has to hold up on its own. 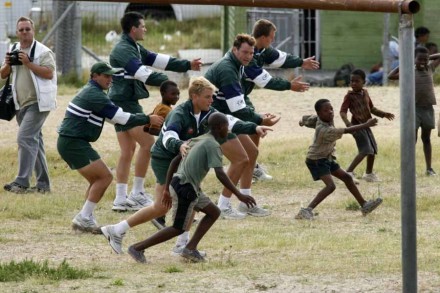 “Watchmen” works as a dark, post-modern, revisionist middle finger to the icons of our optimistic past. The plot isn’t its strong suit, the characters are what make “Watchmen” an impressive experience. Dr. Manhattan is a being who lost his unique electric field in a lab accident. He didn’t keep his hair, but he kept his blue penis, which is useful in revealing that he’s not Jewish. A Materialist god, Dr. Manhattan is losing his grasp on what it means to be human, even as he gains the ability to see life one molecule at a time.

Other characters are tragic, often mirror images of each other. For instance, Silk Specter II and Night Owl II are children of the previous generation of super-heroes, but while Silk Specter resents her mother pressuring her to follow in her footsteps, Night Owl ignores his father’s plea to not don the mask and cape. Rorschach’s mother can be heard saying she wished she aborted him, while Silk Specter’s mother was raped and said the birth of her daughter was one of reasons why she couldn’t hate the father.

The plot of “Watchmen” is an I-don’t-care-who-done-it. Compared to the humane soap opera of the character’s plight, I didn’t find the mystery of the story nearly as compelling or original. I’ll forgive the long running time because these heroes are developing into more believable types than I see in non-super-hero movies. This is a credit to the source material by Alan Moore, the screen-writers, the director and the cast. All well done.

I like violence. I don’t like gratuitous suffering depicted on screen. There was an excess of bone-crunching that perhaps most R rated movie goers celebrate, but I don’t feel the need to see it over and over again. I know the world is a shitty place without seeing stories with child murder, rape, arms cut off with a skillsaw, legs broken backwards, etc. It’s one of those instances where seeing blood splatter on a comic page rendered in ink is different than seeing it splattered all over the screen in high definition. I wasn’t bothered by the blood in “300” so I guess I’m still figuring that one out.

***I’d like to stop for a second and address parents out there. Please, for the love of Mary, quit bringing your four year old daughters and six year old sons to R rated movies. I’d love to think you care enough about your kid to delay your own gratification until the movie comes out on DVD, but maybe you can at least see that the presence of your kids ruin my movie experience. When the guy gets his head bashed in three times with a meat cleaver and your daughter says, “Mommy, what are they doing?” you might want to take them to “Hotel for Dogs.” It’s legal to expose children to graphic sex and violence, but if I lit up a cigarette, the audience would come unglued about how I was ruining these kids.***

The thing that bugged me most about the movie was the perpetual adolescence of the themes. “Watchmen” is a movie that refuses to grow up. Like the alternate 1986 where it takes place, it’s trapped in a Reagan-hysteria time capsule. The politics of “Watchmen” are the usual tired cliche we get from Hollywood, only now it’s exaggerated to a point of being, well–comic booky. Nixon is the president as crime-fighters formally join the military industrial complex.

“Who will watch the Watchmen?” becomes a catch-phrase for “Who will watch Reagan, Thatcher and Bush?” I guess it slipped past these backward looking paranoids that the Hamas terrorist state of Gaza is funded by Hillary Clinton while Obama justifies the ends of choice protection through the murderous means of abortion expansion around the world. But you won’t find any characters with Carter’s plastic face, just Nixon, hints of Reagan, and plenty of imagery pointing to Bush.

And the biggest cliche of all is the addition of alternative fuels. As I recall, this wasn’t in the graphic novel, which was published in the ’80s. But our nation’s One True Religion is an obsession with a different sort of industrial complex, with a body count in the tens of millions produced by environmentalists and their ends-justify-the-means apocalyptic vision. Is Hollywood aware of any bad guys besides conservatives and is it aware of any catastrophe outside of the non-existent fossil fuel one?

The arrival of the comic book generation all grown up didn’t bring any new wisdom to the table for having survived the journey. Youthful eyes behold the super hero icon as an optimistic ideal, a modern parable that gave us hope, wonder and fantasy added to our morality tales. But the super hero all grown up is sick and void of wisdom. The hero genre hasn’t brought power and light to the concerns of adults but injected our sickness and hang-ups into yet another American icon.

“Watchmen” is a thoughtful movie artfully executed, but in the end, just another dark R rated drag. Glad I saw it, won’t see it again.