“We sent a clear message to the West regarding the red lines that should not be crossed.”

That was the arrogant declaration of victory from the Organization of the Islamic Conference nearly two years ago, regarding the shrewdly orchestrated Muslim mayhem around the world protesting such infidel abominations as the Danish Muhammad cartoons and Geert Wilders’ short film Fitna. 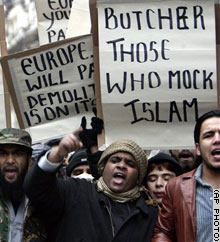 “Red lines” indeed – a phrase chillingly reminiscent of Samuel Huntington‘s famous observation that “Islam has bloody borders.” Except that the red lines the OIC is referring to aren’t geographical – they are the ever-tightening limits that Muslim fundamentalists are imposing to choke off our freedoms.

The influential OIC is the world’s largest Muslim assembly, consisting of 57 member states (you know, the same number of U.S. states candidate Obama campaigned in). Its primary aim is “conducting a large-scale worldwide effort to confront Islamophobia.” (As I’ve written here before, Islamophobia is a mythical beast that the OIC and collusive groups like CAIR, the Council on American-Islamic Relations, use to intimidate us into craven appeasement.) Their goal is to abridge our free speech by making criticism of Islam an international crime; their strategy works because the West has been so emasculated by multiculturalism that we’d rather embrace cultural suicide than offend the tender sensibilities of such violent barbarians as the Danish cartoon rioters.

Everyone is aware by now that Comedy Central’s South Park creators Trey Parker and Matt Stone were targeted by a not-so-subtle threat from Zachary “Abu Talhah Al-Amrikee” Chesser, the leader of a small New York-based group of fanatics at RevolutionMuslim.com. Chesser found the fearless South Park satirists guilty of an insulting depiction of Islam’s prophet Muhammad as someone who – wait for it – cannot be depicted without incurring death threats. To drive his point home, Chesser posted a picture of Dutch filmmaker Theo van Gogh lying on an Amsterdam sidewalk, shot several times in broad daylight by an unrepentant Islamic fundamentalist, his throat cut, a machete stuck in his chest and a note calling for holy war pinned to him with a second knife. The message was clear – van Gogh had been executed for insulting Islam with his short film Submission, and now Parker and Stone can expect the same fate. 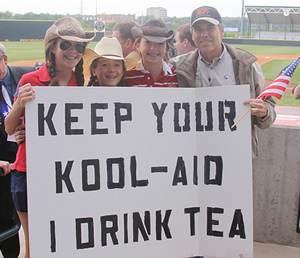 The site RevolutionMuslim.com is now down, but at the related RevolutionMuslim.blogspot.com is an exhaustingly wide-ranging, unapologetic declaration with the catchy title, “Clarifying the South Park Response and Calling on Others to Join in the Defense of the Prophet Muhammad (Peace Be Upon Him).” Far from backing off from the implied threat, the declaration’s poster – presumably Chesser – launches into an anti-American rant and a scholarly justification for Islam’s position that the punishment for blasphemy is death. He stresses that it is absolutely incumbent upon all Muslims to abide by sharia law, so any Muslim who “condones” South Park‘s behavior does not possess “even the weakest of faith.” So much for moderate Islam.

But what about freedom of speech? “As Muslims we do not define speech which has no place in a moral society as ‘free speech.'” Indeed, free speech “is not a value that the Muslims share with America as a whole.” The declaration closes with an ominous quote from Chesser’s idol Osama bin Laden: “If there is no check in the freedom of your words, then let your hearts be open to the freedom of our actions.” Well there it is, then. We can either curb our speech, or cross that red line and deal with the consequences from Muslims who are commanded, by Islamic law, to execute us.

In reporting on this controversy, the media have, as usual, resorted to their fallback narrative of describing Islamic fundamentalists as “loners” and “crazy people” who have hijacked what would otherwise be the Religion of Peace. The danger in these dismissive labels is that we mistakenly view the terrorists as isolated nut jobs, when in fact they are united by a common goal – the capitulation of the West and the establishment of sharia worldwide – and they are perfectly capable of articulating and ideologically justifying it. Whether the dozen or so members of Revolution Muslim and the 57-member states of the OIC are officially linked or not, they are working toward the same end.

CAIR’s ubiquitous spokesperson Ibrahim Hooper calls Revolution Muslim “an extreme fringe group” that is smearing Islam with its “outrageous, irresponsible” statements. But CAIR hasn’t issued a formal statement about the affair, ostensibly because it doesn’t want to give South Park any more attention. Too bad, because amid all this uproar, CAIR is throwing away a golden opportunity to explain exactly how these “crazies” have “hijacked” the religion. This would be the perfect time to discredit their “outrageous, irresponsible” distortions, wouldn’t it? And to stand with the South Park creators in defense of free speech? 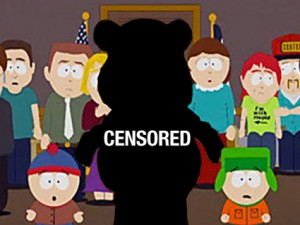 The Los Angeles Times claims that such threats present a dilemma for media companies, who are “struggling to balance free speech with safety concerns and religious sensitivities.” This is giving them way too much credit. The media and the entertainment industry care absolutely nothing about religious sensitivities; if anything, they normally delight in mocking and sneering at faith, especially Christianity. But they treat Islam with kid gloves because, as Fox’s Bill O’Reilly said, “these people are killers and they will kill you.”

Nor do media companies care about free speech except when it suits them. They shut down politically inconvenient truths, such as Disney/ABC’s shameful suppression of The Path to 9/11 miniseries, which I have written about here. And they fold (like a Bedouin tent, as Mark Steyn hilariously put it) at the first hint of Muslim disapproval. No amount of Christian offense would compel Comedy Central to rein in South Park‘s depiction of Jesus defecating on the American flag, but in the wake of the Revolution Muslim threat, Comedy Central decided to bleep over any subsequent reference to “Prophet Muhammad,” and his visual portrayal was replaced with a black “Censored” bar. There’s a reason Islam means “submission,” and Comedy Central has exemplified it. 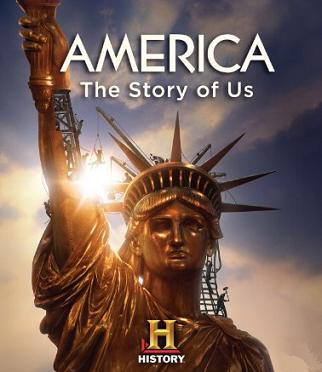 And as for media companies’ “safety concerns”: every time they cave in to Islamist threats of violence, the terrorists win, as the corny saying goes. It quite simply encourages our enemy to ramp up the threats, which then endangers even more innocents.

The OIC boasted about “red lines that should not be crossed” – well, the time has come for Hollywood to stop placating these murderous zealots in its usual way, with knee-jerk self-censorship, and to draw a line in the sand of our own, against religious totalitarianism. In the absence of any government acknowledgement that fundamentalist Islam is a serious threat to our way of life, the entertainment industry must rally behind Parker and Stone, and take the lead in a cultural counteroffensive against the jihadists.

Unless Americans stand shoulder-to-shoulder against such assaults on our hard-won Western values, Islamic fundamentalists will continue to be more effective at importing sharia law than we are at exporting democracy. We must stand for our principles and freedoms with an even greater degree of unwavering fervor and cultural pride than the jihadists possess. Or make no mistake, we will all be witness to the slow, humiliating death of Western civilization.