When we find ourselves in difficult times, it is easy for us to lose hope…to wonder “why?”…to want to give up the fight. But every now and then, when we least expect it, God shows up in a big way to let us know He is with us and is in control…always…and I am reminded of these lyrics from the song “Praise You In This Storm” by Casting Crowns: “…as the thunder rolls, I barely hear You whisper through the rain, ‘I’m with you’…”

What started out as a regular weekly spotlight on one of our great culture warriors at BigDawg Music Mafia – this time on the amazing music of our good friend Chip Murray, a truly gifted singer/songwriter who also happens to be a delightful, down-to-earth blogger – has turned out to be so much more. We are reminded not only of God’s incredible Grace, but we are also reminded of the sacrifices of our fallen brothers and sisters that enable us to celebrate our freedom. May this story–Chip’s story–lift your spirits and give you hope.

It is a pleasure and an honor to introduce our friend, Chip Murray.

Chip got his first guitar (a Stella) at the tender age of 13. It may have been a cheap guitar, but he quickly found it to be a great tool of expression and a very cool way to connect with people. Growing up in the turbulent 60’s, the guitar became his life raft and steady friend through the whitewaters of adolescence…. And while the rest of the world seemed to be finding themselves, making their marks and staking their claims, he was tasting the silent sweetness of nowhere. And yet, by 35 he had lived everywhere from Boulder to Reseda, to Morgan City and the Houston suburb of Bacliff. He lived, worked, loved, fought, and danced with “the people” on every coast of this great land. He became one of them, assimilating their culture by inhaling their music and stories into his heart and soul… “Gone Wishin‘,” the debut CD from his band Cavern was his first public “exhale” and but a glimpse of what’s inside. From “Devil in Me” to “Deja Vu Blues,” Gone Wishin’ is a metaphor for our journey from the darkness to the light….and after “we rest on the wind, we’ll come right back to our mothers again.”- Gibran.

By 2010, Chip was back in the studio again, this time with Producer/Engineer Adrian Holtz (The Bravery, Black Rebel Motorcycle Club, The Ravonettes, Neil Dorfsman), his former Cavern bass player Peter Verutes and fellow Warwickian keyboardist Glenn John Arnowitz. The result is a new 15 track CD, Wide Awake, released 5/1/11! His new material from “Wonder Why” to “Home,” and “Tip Jar” is less personal and yet from a deeper and more connected place that is sure to touch you in places long forgotten…leaving you completely satisfied, wanting only a smoke!

If the world hasn’t heard of Chip Murray yet, they’re going to. With lyrics as powerful as Bob Dylan (yes, that powerful), an earthy, warm, weathered voice that sings about love and life and everything else in between, and wonderful, acoustic, honest production, “Wide Awake” is one of the best albums of this decade.~ Bobby Jo Valentine

In His Own Words:

It gets awfully lonely up here in New York for an out-of-the-closet Conservative like myself. I recently had a liberal friend of mine passionately encourage, advise, and counsel me to actually “SHUT UP ‘n sing!” LOL!!!

I made a promise to myself in early 2008. I felt that if some kid could strap on body armor and leave his home, family and friends to go dodge bullets in some God-forsaken desert foxhole, then the least we could do is stand and engage the even more ruthless enemy here at home! The Ballad of John Hall was my first politically inspired song…reflecting my experience at the first 9/12 march on Washington and my complete disgust with our local Congressman at the time, John Hall (Former front man for the 70’s band, Orleans).

I’ve never truly felt purpose in my life…until now. At 58, I’ve always been a late bloomer, but the truth is that I didn’t become a serious musician until 8-10 years ago. My wife saw something in me that nobody else (including me) saw. That seeing gave birth to I Believe, and the rest is history! Now it is clear to me that God has blessed me with a voice to sing, a pen to write, and the heart to empower both! Everything else is just bugs on the windshield!

I wrote Independence Day on July 3rd, 2009. It came to me as I was putting the flag out and wondering where had all the honor gone? “My cousin Rocky” was a helicopter crew member who was shot down and killed during his 2nd tour in Vietnam. The fact is that my consciousness has evolved from those turbulent years to a point where I have learned to question everything and develop the courage to stand, even if it means standing alone!

What I have come to LOVE about BigDawg Music Mafia is the fact that Independence, Courage, and Common Sense aren’t exceptions here…they are the rule here! It has become a very cool sanctuary…a place to re-charge, re-generate and energize! Kindred Spirit is the warm glow of candle light there…

Chip had sent a copy of his new CD Wide Awake to me shortly after it was released and there is not one song on the CD that I don’t enjoy thoroughly. His warm, melodic lead vocals and perfectly blended harmonies, his thought-provoking and heart-warming lyrics, and his beautiful acoustic arrangements are amazingly soothing to one’s soul and need to be shared.

When I first heard Independence Day, I really had hoped to share his story in time for the Independence Day weekend. Unfortunately (or fortunately as it turns out) he had no video for that song to include in this spotlight piece so I offered to do one for him and began scouring the internet for photos to accompany his lyrics. When I got to this this verse…

My cousin Rocky who I never knew…Fell from the sky for me and you…Rice paddies are soft but can’t break the fall…the weight of freedom, heaviest of all.

…I decided to include a photo of the Vietnam Memorial. While searching for one I wanted to use, I regretted that I didn’t think to try to find out Rocky’s real name early enough for me to drive to Washington, D.C., pay a visit to The Wall, look up where on the wall his name appears, snap a photo, and use it for the video. So in lieu of that, I looked at literally hundreds of photos and selected the two I liked best. 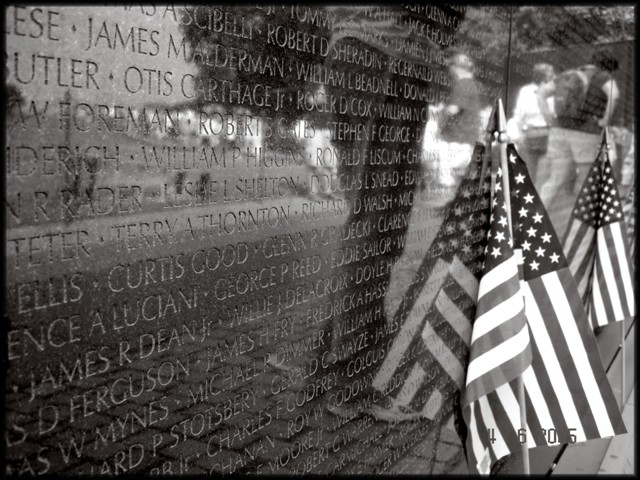 Here is where the goosebumps come in…

On the morning of July 1, 2011, a few hours after I sent the just-completed video to Chip, he sent an email to me saying he absolutely loved it. About an hour later, I learned that he had exchanged emails with Rocky’s brother, Steve, where he asked Steve to look carefully at the photo of the wall at 1:29-1:32 in the video…and asked if Rocky’s real name was James R. Dean, Jr. As Chip mentions in his song, he never met Rocky…nor did he know his real name. Yet, Chip later told me that when he watched the video for the first time, when the images of The Wall appeared, something made him pause and go back to take a closer look. He saw the last name “Dean” upon closer scrutiny and recalled he had an Uncle with that last name, called his mother and asked if she knew Rocky’s name but she did not. She did, however say that Rocky’s father’s name was “Jim.” Chip told me his hands were trembling as he typed out the email to his cousin Steve.

This was Steve’s reply:

Oh my gosh! It is! Rocky’s real name was James R. Dean, Jr. My dad was Sr. I have been to the wall and looked at & touched his name. The odds of this happening are unbelievable. A song that mentions Rocky, a friend does the video not knowing anything about Rocky, does a random wall shot on a huge wall….wow!!!!!…Makes the song even better and more meaningful and it was already incredible.

When Chip told me about this, he said we just “witnessed one of God’s miracles” and added:

God truly has us secure. I don’t even know what to say….This is the most amazing thing that has ever happened to me…How do I sing tonight without crying??? You captured Rocky at 1:29!!!!

Yes, the tears welled up and a few spilled over…and I had chills that would not go away in spite of the very warm temperatures that day. A mere coincidence? I think not.

Consider this: There are 58,272 names on The Wall and “about 4,330,000 results” that came back on a Google search for images of the Vietnam Memorial. I looked through several of them before I found the ones I wanted to use. I’m no mathematician but figure the odds of my using one that actually had the name of the person Chip sings about in his song.

As Chip said to me later that day…”God went from a whisper to a shout”…and he emailed the following to some of his close friends and family members:

“…there is a light in what I am about to share that transcends everything…and I want the purity in the newness of this revelation to shine directly into your deepest hearts with a nourishment that no one could appreciate as much as you…The person who made the Independence Day video for me knew NOTHING about my cousin Rocky other than what the rest of you knew from the song lyric. She alone picked out “The Wall” footage you will notice at 1:29 to 1:32 in the video. I DID NOT KNOW until this morning that my cousin Rocky was James R. Dean, Jr.! Now I do know, as now do you…and we now know a whole lot more when you really think about it.”

That very evening, Chip performed several of his songs at his Wide Awake CD release party. He shared the following with me the next day:

Our CD Release was amazing on Friday night…I chose a farm, Pennings Farm, for my release party…A big flag draping the back of the stage overlooking corn fields…kids…ice cream…it was open to the public so we had an amazing turnout…the Liberals looked like they were going to implode when we played “The Ballad of John Hall”, but there wasn’t a dry eye in the crowd when I told the “Rocky” story before playing Independence Day…