People who enjoy great comedy know that the biggest laughs are rooted in truth, which is why Sarah Silverman, that irreverent purveyor of jaw-droppingly sick humor, is so hilarious – albeit to a tiny group of people.

Only a liberal woman of Silverman’s brilliance would have the perverted ingenuity to exploit social media for laughs by mocking the slaughter of innocents. If Hideki Tojo, a man responsible for killing 5,000,000 civilians during World War II, were alive today, he probably would be one of Silverman’s biggest fans.

Worried that Roe v. Wade could be overturned, and to call attention to the “Republican War on Women,” Silverman recently made comedic use of two iPhone photos, Twitter, and a burrito.

Showing off her abilities, Silverman tweeted side-by-side “before-and-after” photos of herself. One photo, post-burrito, depicted Silverman appearing to be six months pregnant. The “after” photo showed Silverman with her previously-bloated stomach flat as a board. 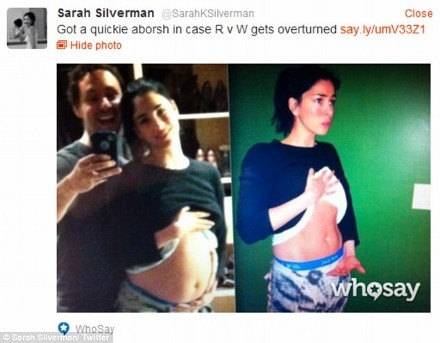 The @SarahKSilverman photograph was accompanied by a caption that read, “Got a quickie aborsh in case R v W gets overturned.” Now how side-splittingly funny is that?

Liberals in general are a comical group. But a high-profile comedian like Silverman throwing her burrito-assisted weight behind the right to choose and making a lighthearted political statement with a pre/post abortion snapshot gag, in liberal circles, is probably heralded as pure genius. Who knows, maybe the edgy Twitter recognition will win Silverman another Creative Arts Emmy.

Surprisingly, her pro-choice tweet was not her first public commemoration of Roe v. Wade. On her Comedy Central show, Silverman had already starred in an amusing “Abortion Montage” where she reminisced about her own three abortions while Green Day’s “Time of Your Life” provided a faux-poignant soundtrack for double the laughs.

Furthermore, always fair-minded, Silverman simply refuses to discriminate. In the past, the Jewish comedian has even entertained her fans with genocide jokes. Sarah claims her grandmother survived a Nazi death camp. In her movie “Jesus is Magic” she expressed gratitude that grandma, whom Silverman claimed “sported a vanity tattoo that said ‘Bedazzled,'” stayed at “one of the better concentration camps.”

A philosophy that terrifies the pro-choice crowd is that of humorless conservatives who believe violently removing a tiny, living human being from its mother’s womb has no place in civil society, let alone stand-up comedy. Compounding that fear is the all-but-certain Republican presidential nominee Mitt Romney vowing that, if elected, he would “work to reverse Roe v. Wade” and leave the abortion issue decision “up to individual states and the Supreme Court.”

With that in mind, it stands to reason that the more highly evolved connoisseurs of Silverman-style humor would “applaud the high-profile personality for using her trademark sarcasm to directly comment on the possibility the Roe v. Wade decision may be overturned in the U.S.”

As a matter of fact, in response to the vile, disturbing “quickie aborsh” tweet, the bawdy Silverman has received a “wave of support from hundreds … voicing liberal pro-choice beliefs,” and kudos from those who appreciate a “strong and simple point about the ongoing War on Women.”

More recently, confirming the Democrat view that he’s “wooden and robotic,” Romney expressed the straitlaced, puritanical view that “People of both political parties know that more than a million abortions a year cannot be squared with the good heart of America.” Somebody should inform the stodgy Romney that in liberal circles, abortion is not only a woman’s Constitutional right; it’s also outstanding fodder for some very funny jokes

Nonetheless, Romney and all his “good heart” claptrap has proven again that, besides being rich and out of touch, he obviously lacks the sense of humor that would have made Adolf Hitler, Pol Pot, and Adi Amin enjoy the brand of abortion-based wittiness that has made a star out of Silverman, America’s queen of shock jocularity.