There’s plenty about Girls to annoy conservatives, yet this often creepy, usually skeevy, critically-acclaimed HBO series is also a test for conservatives.

Will we finally heed Andrew Breitbart’s warnings about the importance of taking pop culture seriously or just keep fiddling as the culture burns?

If conservatives are going to be in the popular culture – and act to change it – they can’t simply ignore shows like Girls that capture the zeitgeist, even if the zeitgeist makes their skin crawl. Season two is well under way, and conservatives need to participate in the discussion.

Girls is about four young, aimless college grads living in New York. Think of Sex and the City, except Sarah Jessica Parker has doubled her weight, dresses like a potato sack and fancies herself the voice of some undefined generation. There’s sex and nudity – just not hot Homeland sex and nudity. This is the first show in the history of cable television where male viewers actively root for the heroine to keep her clothes on.

Said heroine is played by Lena Dunham, who like most of the starring actresses is the daughter of somebody famous. David Mamet’s daughter is in it, as is NBC’s Brian William’s daughter. But this isn’t just some vanity project. They are all talented, and Dunham is very talented. She created the show and writes most of the episodes (and well – the dialogue is sharp and funny), but her fearless portrayal of an awful, awful young woman truly makes the show something special.

It’s the kind of thing her kids will someday show her on YouTube; hopefully, she’ll mature enough by then to be embarrassed. She also is given to “Hollywood brave” pronouncements like that she won’t get married herself until gays can. And you members of the Greatest Generation thought you knew courage.

The characters seem to live in a minority and Republican-free bubble (though a black Republican (!) shows up as a character this season). There is no reference to religion – that wouldn’t occur to them.

Questions of traditional morality never arise – of course you should consider an abortion! Instead of facing questions of morality, the characters face questions of behavior along the lines Seinfeld parodied – who has “hand” in a relationship, or the social faux pas of the “close talker.” To put it bluntly, these are not the big questions that the great thinkers of Western civilization have pondered over the centuries.

What can be puzzling is trying to figure out how Dunham actually feels about her characters – does she really understand how deluded and shallow they are, or does she (horrors) consider them as some sort of role models for her co-generationists? Perhaps we’ll have to wait until her book comes out – the one some publisher fronted $3.7 million to publish.

Completing the “rub the conservatives the wrong way” trifecta is the fact that the liberal press loves the show and fawns over Dunham with such slobbering devotion you’d think she was Obama himself. So, why should conservatives want any part of this?

The answer, if the fact that the show can be pretty amusing isn’t reason enough for you, is that conservatives need to be a part of big cultural events if they want to be a part of culture at large. But that begs the questions of why we conservatives would even want to be part of the culture at large. It’s a cesspool. And there’s an answer for that too – so we can participate in changing it. 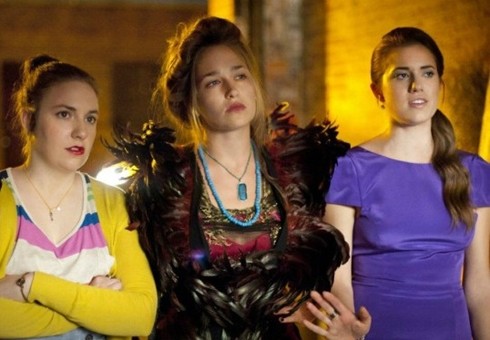 Look, if you were as surprised as I was that Mitt Romney lost in November, then you were likely also making the mistake of staying within your comfort zone, within a world purely of the friendly media. It’s comfortable within the conservative media – it speaks to us and it doesn’t insult us. It’s nice. It’s also, like every other human endeavor, subject to developing into a closed loop echo chamber. We all need to figuratively follow the example of Breitbart News’ Ben Shapiro and figuratively face down the figurative Piers Morgans in our lives and figuratively kick their butts.

You can watch nothing but ABC Family (assuming that’s still a thing – is it still a thing?) and you may never again see anything that will offend or annoy or bother you. But by not participating, you miss the larger discussions that pop cultural events outside your safety sphere spawn. You cede the culture to the liberals, and we’ve seen how that’s played out.

You can’t talk about Girls at the water cooler with the rest of the office if you haven’t watched it, and if you aren’t part of the discussion you aren’t injecting and modeling the conservative ideas and values that we need to advance. You can criticize and critique if you’re AWOL from pop culture.

See, Andrew Breitbart didn’t expect someone else to do the hard, grassroots work of retaking our culture. There’s no army of conservatives out there who’s going to do it while you’re curled up watching reruns of The Andy Griffith Show (starring an actor who shilled for Obamacare).

There’s you. You need to occasionally – not always, not all the time – acquaint yourself with pop culture sufficiently to participate in the discussion it sparks. Girls poses hard questions about young people, their aimlessness, their lack of morality, their crushing unhappiness – and conservatism has answers.

You need to make sure the people around you hear those answers, but step one is to be a part of the discussion. And step two is eventually taking over the reins of pop culture ourselves. We’ll know we’re winning when we see the conservative equivalent of Girls.