It seems as though Kanye’s daughter, North West, isn’t a fan of her father’s fashion, and fashionable people aren’t a fan of screaming children.

Things took a turn for the worse when North started throwing a tantrum. Wintour, who is regarded as a force to be reckoned with in the fashion world, looked extremely put off  (pictured below) by the 18-month-old’s behavior, but kept a straight face and inched her body away from Kardashian and the screaming child.

According to the New York Daily News, others in the crowd were offended by North West’s irritability, too.

“Couldn’t they leave it backstage,” Elle magazine’s Anna Slowey was heard muttering, reports the outlet.
“Typical celebrity crap. Like I really even care.”

Before the show, North arrived on site with her mother and appeared to be in good spirits. Kim was reportedly dressed by her husband, Kanye.

It has become a popular opinion this past week that a member of the Kardashian/West clan has a problem with childish public outbursts, and now North West joins him.

She deserves a pass. 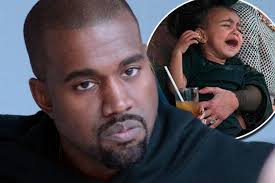