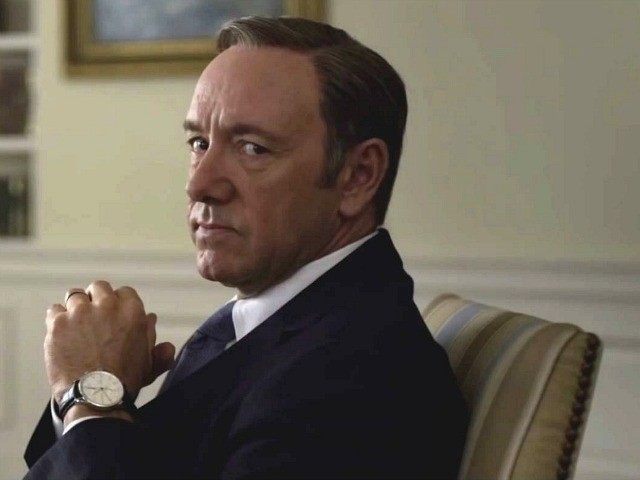 Saturday morning I brought Matzah ball soup to my kids from Brents, the neighborhood Jewish deli. Yes, when they aren’t feeling well even goy children know what’s good for them!

My daughter Frances, a highly artistic and intelligent girl, asked me a question. She loves the Netflix show House of Cards  and is a huge Kevin Spacey fan.

I have never worked with him nor met him. The six degrees of separation between us is primarily the show Wiseguy, starring the terrific Ken Wahl. In the late ‘80s, Spacey had done an arc on that show, and I had done one sometime after his.

I respect and like Spacey’s work immensely. My daughter explained to me the latest episode of House of Cards she had seen the previous night.

She described a scene in which Spacey’s character goes into church and, while looking at a statue of the crucified Christ, spits in his face. He then stares at it a moment, takes out a handkerchief and wipes the spit off Christ’s face. As he does this the statue begins to shake. My daughter said the look on Spacey’s face was priceless.

The Christ figure then falls off the wall and crashes onto the church floor into many pieces. A priest walks in, looks at the shattered pieces, and Spacey says something like, “the statue fell.”

I am Catholic. My children are raised Catholic. They all think and act for themselves, but my daughter was affected by this scene. Partly because of the shock value but also partly because deep down she knows of my love for Christ.

My daughter asked me, considering my faith, if I would play out such a moment on screen. Now I have done some pretty dastardly things in movies. I’m no shrinking violet nor angel. But after thinking a moment I said to my daughter, “I do not think I could have spit in the face of Christ.”

That is not to say, I myself, may not have, in the confines of my own thoughts expressed anger toward God. I’d be lying if I say I never did, but I did so with remorse afterward. Perhaps if there was some huge revelation or contrite scene afterward, but I do not think I could and so I told her.

“Knowing you Dad, I didn’t think so,” she said.

I must say something disturbed me about this act and it began to brew inside of me. It wasn’t until this afternoon while flying to New York and, by chance, sat next to a very successful woman screenwriter that my thoughts began to take form. As is my custom, when able, I start a dialogue hoping that we can discuss politics. Perhaps I can get a peek into what lurks in the mind of the Hollywood progressive.

I cannot give you a clear definition of her politics except that she is a bright, compassionate, lovely human being who wishes America can find a Churchill for her next President.

Anyway, I brought up the House of Cards scene and asked if she had seen it. She did. I asked for her thoughts. She said it did disturb her and thought it gratuitous, done merely for shock value. The intent was that it would be discussed over the water cooler.

I said that while that may be I did not think it gratuitous but that it was making a statement. Perhaps anger over the abusive priests or the moral stance the church takes on some issues. The scene was definitely agenda driven. 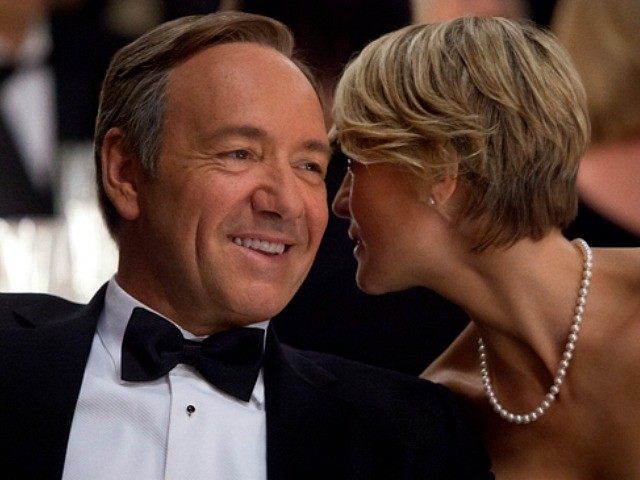 In any case it was more of the disregard for Judeo-Christian values we see happening in American society. I then started my rant. Why wasn’t a wicker symbol or satanic symbol, or Hindu, or Buddhist or a past Pope or any other religious symbol used? Why the statue of Christ?

A man who sacrificed his life for mankind. Whether you believe or not that is what Christ represents. Why Christ? And then I thought, if they really had balls and wanted water cooler conversation why wasn’t it a statue representing the Prophet Mohammed? Why? And of course we all know why … because Spacey would have his cajones cut off and stuffed in his mouth the next episode.

Wouldn’t that make for an Emmy-winning moment! And I am a Spacey fan!

What would happen if Spacey desecrated a likeness of the Prophet? It would make what happened in Paris seem like an episode of “Happy Days.”

Herein lies the hypocrisy or ignorance of the left. They think it all cool and cozy to piss on Christianity. Maybe, because there is no repercussion? Perhaps it’s time for Christians to start a crusade. Heck, President Obama brought them up – incorrectly, I might add.

As a matter of fact let them start The Knights of the Judeo-Christian Values so that there is accountability for the blaspheme against Christ and the Ten Commandments. An ISIS of Christian fundamentalists who refuse to let the name, image, morality and Christian faith and holidays be attacked.

I guarantee Obama and his administration wouldn’t hesitate to call it “Radical Christianity,” and Hollywood would be demanding it of him!

But all we get is silent compliance because the President has a deep intellectual understanding of the Muslim world and their grievances. America must change her evil ways. American Colonialism is to blame.

Speaking of Hollywood, I was part of a 2009 documentary Barry Levinson directed called “PoliWood.” I wish all the outtakes of scenes were on the DVD.

I will describe one in particular. There was a group of recognizable actors and actresses speaking to about 50 potential voters in a town hall setting. The gathering took place before the 2008 election. At two different times, two highly visible, intelligent and respected actors equated Radical Islam with Christians (i.e. Evangelicals) who blow up abortion clinics.

Well not being able to bite my tongue any longer I unleashed, with respect, mind you. Bill Ayers can blow up and want the overthrow of the U.S. Government and capitalism and he is rewarded with a professorship. But those who believe that life begins at conception do not have the right to speak out and are dangerous to society.

The left will fight for Sharia but condemn the Ten Commandments. The ACLU will defend Sharia but not the right to life. This is not about that discussion which has been decided. I only bring it up as a matter of example.

And yes, I am well aware of how some of you may react, but let me tell you before you jump to conclusions. I have much more to say about some things but do not. That takes a long discussion. What I will conclude with is that the only lefty I know in entertainment who has any balls today is Bill Maher. I disagree with 85 percent of what he says, but at least he is an equal opportunity objector.

He is not afraid to hold his progressive brethren accountable, at least somewhat, in not defining who the terrorists are and the conflict we face today.

I wonder what would happen if someone in a TV show spit on the face of President Obama would their ever be such a moment? We live on the greatest nation on earth, and we are fortunate that we are able to have the freedom for actors to spit in the face of the son of God and not be beheaded for it.

And also, while Hollywood spits in the face of Christ, and as we are in the midst of a new Lenten season, remember who said, “Father forgive them, for they know not what they do.”