Over the years I’ve met lots of liberals who say after a few hours of talking with me, “Oh, you’re normal. You’re not like the other conservatives.”

I imagine that Emily Zanotti must hear the same thing. “But you’re so normal for a cosplayer!”

I’ve been following Zanotti on Twitter and Facebook for years and have gotten to know her through her writing at Naked DC, The American Spectator and the Wall Street Journal. She’s a ten-year veteran of political communications and online journalism. She also goes to several Comicons a year and dresses as everyone from Rocket Racoon to Harley Quinn. 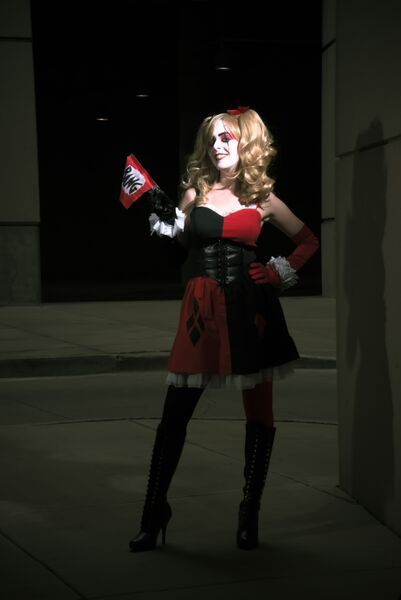 As I prepared for my first Comicon, I peppered her nearly every week with questions about what to wear. While I’m not a cosplayer, I’m still a girl who wants to fit in. I decided to ease into it on the first day with jeans, blazer, lace blouse, and an Army of Darkness necklace. I hope she approves.

LD: Who are some of your favorite characters?

EZ: My favorite characters are the ones that I can relate to the best. When I do cosplay, I choose characters that either match my personality or somehow connect to something deep within me. Usually, I’ve been a fan of the character for a long time, or I’ve noticed something about the character that resonates. I do also tend to choose characters that look a little like me. For example, my favorite character I’ve ever cosplayed is Rocket Raccoon from the Guardians of the Galaxy. I was a GoTG fan from the time I was a little kid, even though it was sort of an alternative comic, at least within the mainstream Marvel comics world. I liked that he was small, but had a lot of attitude – and that he didn’t deny that he was different, but used it to his advantage. As a weird, nerdy kid with glasses, stringy hair and an overbite that an orthodontist was trying to correct with a double retainer, I needed all the reassurance I could get that strange people can do great things.

I also seem to prefer villains to heroes. I love to cosplay Catwoman in her various outfits. I like Poison Ivy, Scarlet Witch and anyone who has ever sided with Magneto in the X-Men series. Villains seem more complex and nuanced to me. And they seem to have more fun. 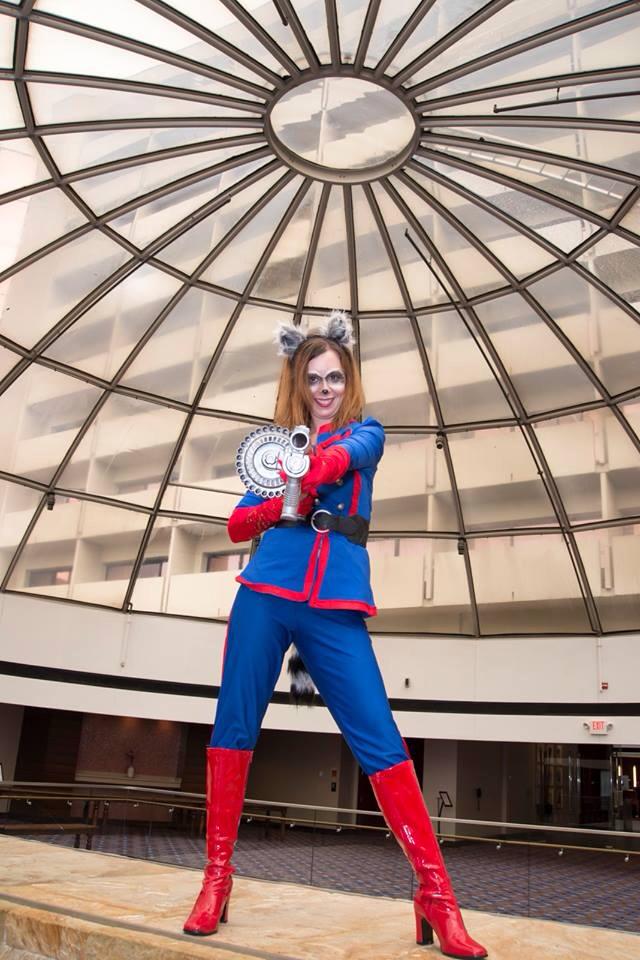 LD: Tell me about your first cosplay experience.

EZ: The first time I cosplayed, it was as Black Widow from the Avengers franchise, right after Iron Man 2 came out. Honestly, I dressed up as her for Halloween because I kind of have a girl crush on Black Widow, and was excited to see her on screen (I actually own the comic book where she makes her first appearance). I bought the jumpsuit, but spent hours and hours outfitting it with just the right patches and details. And I loved every minute of it. I saved the costume to wear at Comicon and had a blast posing for pictures, talking about how I’d outfitted myself and communing with other cosplayers about how and why we’d created our costumes. From that moment on, I was hooked. I bought a sewing machine and patterns, started poring over comic books to decide whose outfits I’d like to create from whole cloth. The first costume I did on my own was Silk Spectre I from the Watchmen franchise.

The experience is very social, and very reaffirming. One thing I love about cosplay is that the community is welcoming and wants you to have fun. I’ve met great friends and I’ve now expanded from one convention per year to three or four. I’ve even gotten my husband involved.

LD: Tell me about your favorite cosplay experience.

EZ: I have a lot of favorites, but Rocket Raccoon is probably my top experience when it comes to cosplay. When I heard that Marvel was making a Guardians of the Galaxy movie, I jumped at the chance to make Rocket’s uniform. It took me only a couple of weeks and when I showed up at C2E2, Chicago’s Comicon, it was ahead of the movie – the trailer had just been released, so there was buzz, but only people who knew about the comics recognized the costume, so I got into these intense conversations about how I came to know Rocket with other die hard GoTG fans. I even got to meet Rocket’s creator.

I ended up taking Rocket to a few other conventions, both before and after the movie. After the movie, the experience was even better: there were tons of kids dressed up as Rocket, and I love taking pictures and hanging out with kids who cosplay and their parents, hoping to encourage them to embrace their love for the genre. With Rocket, I also entered the costume in a nationwide cosplay contest sponsored by Marvel. I ended up being a finalist and got to do a short video in costume! I’ve since retired the costume so that I can move on to other projects, but it remains my favorite experience as a cosplayer, and one that solidified my love for the hobby.

LD: Given that you’re a conservative and work in journalism, how do people react when they learn you’re into cosplay?

EZ: It depends on who I’m talking to! I think I’ve done a lot to introduce cosplay to the conservative journalism world. I’m not sure many people who would have read my stuff over the decade I’ve been in politics knew what cosplay was before they noticed I was into it. Conservatives are usually really curious about it and ask a lot of questions – what it’s like, why I do it, etc. – I think the same way they’d ask about any outside hobby they discover someone in the community has. Overall, the response has been really positive and open-minded, and really encouraging, from fellow conservatives and bloggers. I’ve met lots of comic book fans who cross over into politics who like to ask about my current costume and who will even meet me at conventions for a drink.

On the other hand, I’ve also met a lot of conservatives in the comic book industry who are closeted. I think being so open about cosplay has encouraged some who are also in the industry – even some big names – to reach out and talk shop.

The liberals at conventions haven’t always been so open minded, so I stay fairly quiet in the cosplay community about what I do – or at least, I stayed quiet until now. There are lots of liberal voices in entertainment, so comics is no exception, and with the recent advent of “social justice warriors” in the comic book industry, it’s certainly rare to experience much in the way of overt ideological diversity, or be welcomed for who you are as a cosplayer if they also know that you, like I do, write for a conservative magazine for a living. I hope, though, that I’m a good ambassador. Clearly, I’m a fan and I’m interested in being part of the cosplay community. 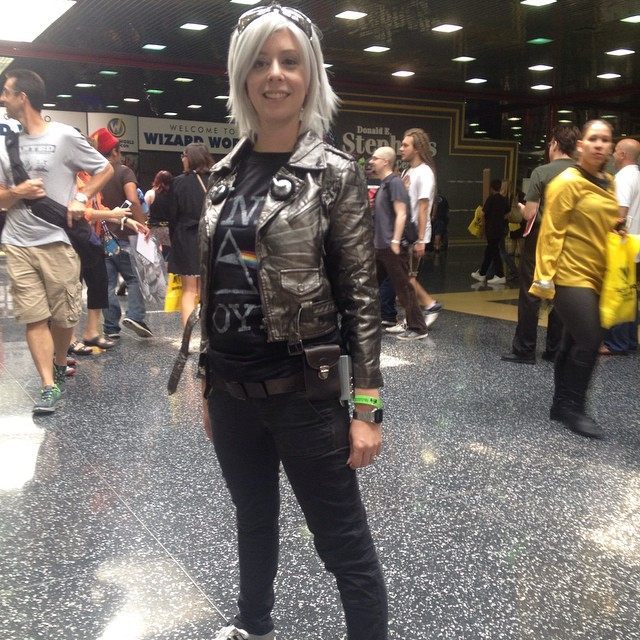 LD: What can conservative events learn from Comicon?

EZ: I think Comicon has been very good at anticipating the needs and interests of its community. They’re very well organized, but more than that, they take their community seriously. I’ve found that many conservative events become exactly the same all the time. People talk about the same things, the same people are always on panels. At Comicon, those panels and those speeches change as the community’s interests change. Where when I started cosplaying, there weren’t any panels on the subject, now there are entire tracks on the subject.

LD: If budget weren’t an issue, what character would you like to be at your next Comicon?

EZ: I’m not really sure – if budget weren’t an issue, I’d probably buy lots of commercial sewing products so that I could make tons of costumes, and outfit my current studio with lots of custom dressmakers models! But if money weren’t an object, I think I would be the Chrometrooper from the new Star Wars movie, or own a screen accurate version of Black Widow’s light-up suit from the last Avengers movie. Those are both costumes that would take lots of experience, engineering expertise and material that I don’t have or can’t afford. Right now, I’m saving my pennies for an accurate Star Trek: The Original Series nurse’s uniform so that I can cosplay Nurse Chapel for the upcoming 50th Anniversary Star Trek convention.

But the fun thing about cosplay is that there are ways of participating at all level of skill and budget!

LD: We hear a lot about the “objectification” of women in comics.  What has your experience been as a woman at Comicon?

EZ: I won’t say that my time as a cosplayer has been totally bereft of negative experiences, but overall, I think the geek/nerd/comic book culture is actually incredibly inclusive of women, more so than most other pastimes. I grew up a nerd, playing Dungeons and Dragons, going to “gamer club” after school, and hanging around mostly guys who shared my passions. There were times growing up that I had to prove myself, sure, but part of that was because the women that the guys I hung out with normally encountered looked down on them. Most people looked down on them. Every once in a while, you hear a soundbite from some random panel at a Comicon about how girls “aren’t interested in comics” or that men don’t want more women involved in the industry, but I think that’s getting rarer, and isn’t borne out by the way women are really treated and welcomed.

I’ve found that cosplay itself is incredibly inclusive. In the real world, you run into body-shaming all the time. People are always telling you how to look, how to feel, to lose weight, to gain weight, not to wear a bikini if you’re too big or too little. That doesn’t happen in cosplay – or if it does, it’s rare and quickly snuffed out by the community at large. In cosplay, as in most fandoms, you’re encouraged to love what you do and embrace who you are. The practice of cosplay isn’t about what looks best on you, or whether you’d look better in this costume or that costume, but following what you love. No one is ever going to look like The Hulk, after all, and I’m certainly not the kind of Amazon that would make for a screen-accurate Wonder Woman, but few people in cosplay take that as an excuse not to costume as their favorite character. Heck, most of the characters I’ve cosplayed as are boys! One was a genetically-modified woodland creature! I can never be those things. But the nice part about cosplay is that I’m encouraged to believe that that isn’t a barrier.