The  ignorance of the political left never fails to amaze. By complaining about the supposed “sexism” of Jurassic World, joyless feminists everywhere — from Avengers director Joss Whedon to the left-wing The Daily Beast — only prove that they failed to grasp one of the primary themes of the original Jurassic Park (1993), and must hate the classic Tracy-Hepburn movies.

In the blazing disappointment that is Jurassic World (more on this below), Bryce Dallas Howard co-stars as Claire, the focused hard-case who runs Jurassic World, a Sea World-like theme park that houses killer dinosaurs instead of killer whales. Claire is incapable of joy; she’s controlling, prideful, relentlessly ambitious, and horribly insecure. 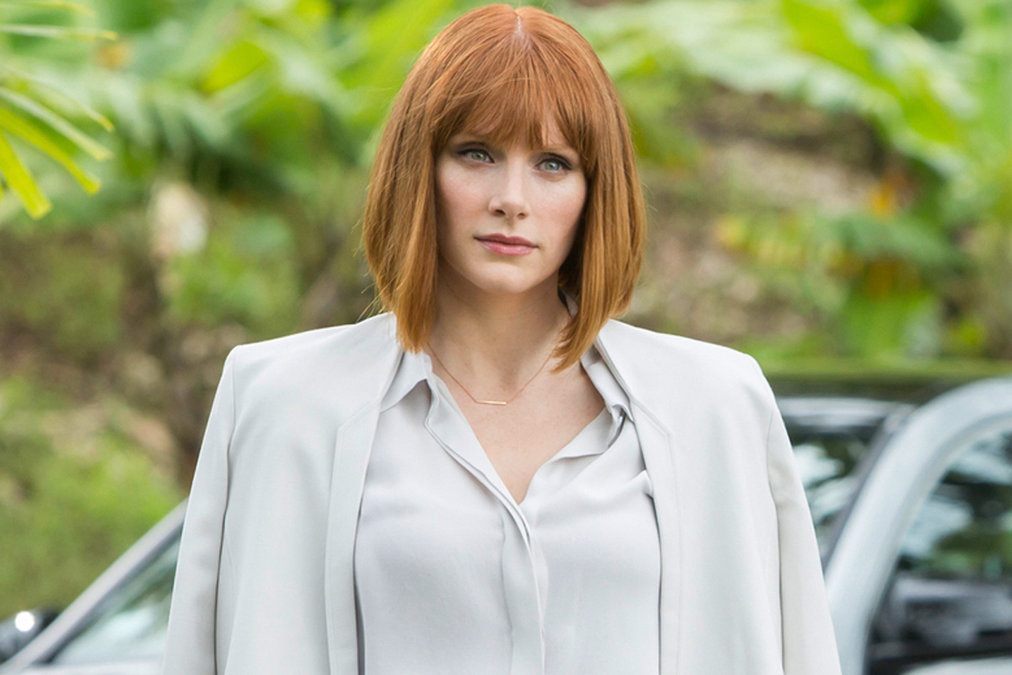 Chris Pratt is Owen, a devil-may-care adventurer with a moral code and a good old-fashioned streak of common sense. He loves animals, his motorcycle and living in ramshackle trailer. Owen is a guy’s guy who once went out on a date with Claire, only to have her arrive with a printed itinerary.

Eventually, the circumstance of the film’s adventure coupled with Owen’s willingness to stand up to her, knocks Claire down to size. By the time the credits roll, Claire is brave, adventurous, a better aunt to her two nephews, and displays — miracle of miracles — warmth and an actual sense of humor.

Dear Feminists: This is called a character arc. Moreover, this is the same character arc that made legends of Katherine Hepburn and Bette Davis, two luminaries of cinematic feminism. Here’s another newsflash: This character arc is so not-sexist, it is the exact same arc written for a man — Sam Neill’s Allen Grant in “Jurassic Park.”  Just like Claire, Grant is a guy who went from a driven prig afraid of change and with no time for children, to a warm father figure. 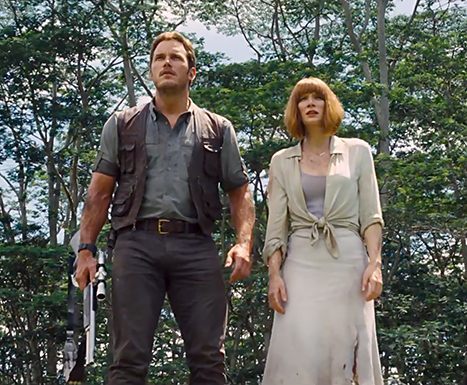 “Jurassic World” is lazy, not sexist — unless you consider such classics as “The African Queen,” “Pat and Mike,” Adam’s Rib,” “All About Eve” and “The Bride Came C.O.D.” sexist.

What left-wing feminists (male and female) are actually angry about is that “Jurassic World” serves as a reminder that they have not yet personally experienced a character arc. Sorry, crybabies, but being repelled by a truthful look at yourself is not sexism; even if that reminder is being blasted out to the world in one of the biggest films of the year.

Now to the movie…

My mistake might have been watching the original “Jurassic Park” trilogy too close to “Jurassic World.” As I mentioned in my trilogy recap, as flawed as the original franchise was (especially the sequels), each of them wowed you more than once with suspenseful, cleverly staged action sequences, and stunning reveals. “World” fails miserably in that regard. There isn’t a single moment in the dinosaur action that doesn’t feel like a retread from the lesser action that came before.

The only good thing is Jurassic World itself, the theme park that fully realizes John Hammond’s (Richard Attenborough) dream. Anyone who has spent a day at Disney World or a Six Flags will delight in the details that make this improbable concept probable. You buy into this world, and that’s not a small thing, what is lacking, though, is a believable, or even cohesive story. 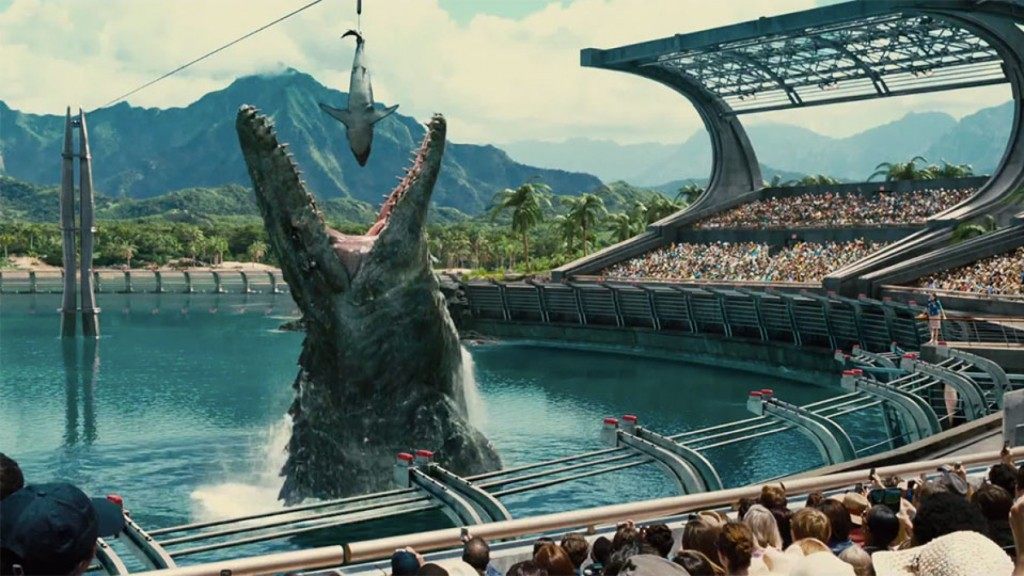 Like any theme park (or summer blockbuster), one of the dilemmas facing Jurassic World is a public jaded by such tired concepts as a living, breathing T-Rex. To keep the turnstiles turning, bigger, badder, and more teeth are necessary. Enter the Indominus Rex, a genetic freak with a big brain and a taste for blood cooked up in a test tube

Indominus escapes… You get the rest. Sadly, you’ve also seen the rest. Only this time there is no wonder — no awe.  And except for a few moments, not even John Williams’ now-iconic score to fool you into feeling wonder and awe.

The CGI doesn’t help. In fact, it feels like a step backwards.

Spielberg’s five ton  animatronic T-Rex is the greatest adventure film creation since the original King Kong. Watching this thing at work 22 years later is still a majestic experience. Everything in “World” is CGI. As good as it looks, no amount of computer effects can ever completely replace practical effects. “King Kong” (1933) might look crude compared to “Jurassic World,” but it feels more real, and that matters.

“World” is also bogged down by a lack of chemistry between Pratt and Howard (you don’t buy for a moment there’s some unspoken attraction between them), and an absurdly stupid subplot involving a crazed military contractor (Vincent D’Onofrio) who wants to use raptors to root out terrorists on the battlefield. 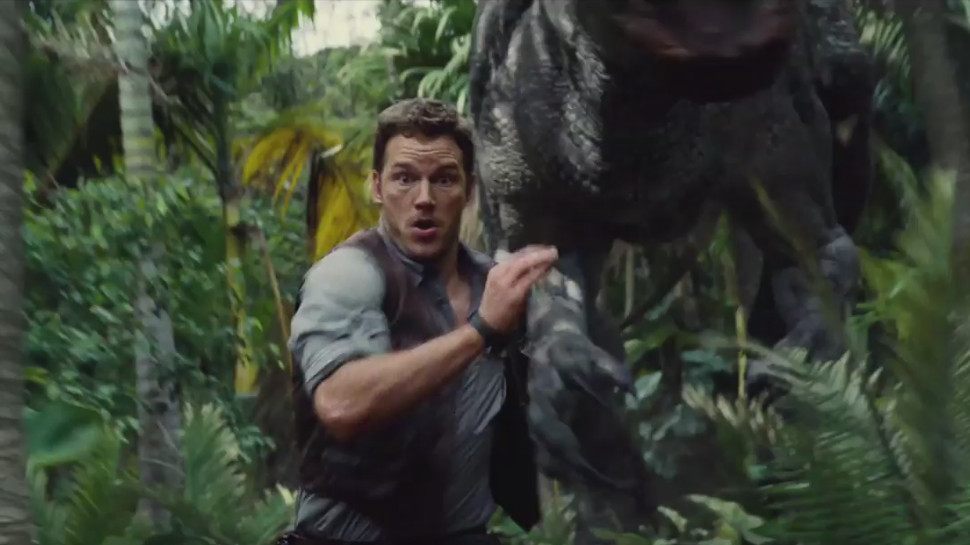 Then there’s Dr. Henry Wu (BD Wong — the only returning cast-member from “Jurassic Park.”) One moment he’s the sweet, dinosaur-loving guy in a white coat we all remember; the next he’s our super-villain mad scientist; the next he’s D’Onofrio’s stooge.

Where “Jurassic Park” stuck to a theme about human arrogance and made its sub-theme about corporate responsibility wonderfully nuanced through John Hammond’s believable “Arrogant Santa Claus” character, “World” hits its big business/militarization themes with thundering ineptitude. The theme park is unrealistically unprepared for a dinosaur escape, and the idea that anyone would consider putting raptors into battle is so preposterous it feel more like a lie than a plot hole.

All of this might be forgiven with compelling characters (they are not) and some suspense (not for a moment).

Granted, “Jurassic World’s” predecessors were dumb in spots (the wild child in part 3), and obnoxiously political (Greenpeace in part 2). What they never were was dull. “Jurassic World” is dull, thanks primarily to its suffocating, overbearing zeal to please.

The promised pieces are all there — along with some nice tributes to what came before — they just don’t add up to anything  that keeps the promise.