While Democrats kicked off the first night of their national convention in Philadelphia, Clinton Cash climbed to the top of Facebook’s trending topics list and dominated Hillary Clinton’s coronation on the social media site.

Clinton Cash sat atop Hollywood stars Rosario Dawson and Sarah Silverman to snag the #1 trending topic ranking on Facebook in the U.S.

In other words, on one of the most important nights for the Democratic party, more Facebook users were posting stories about Hillary Clinton’s corruption — exposed in the Clinton Cash movie — than anything else. 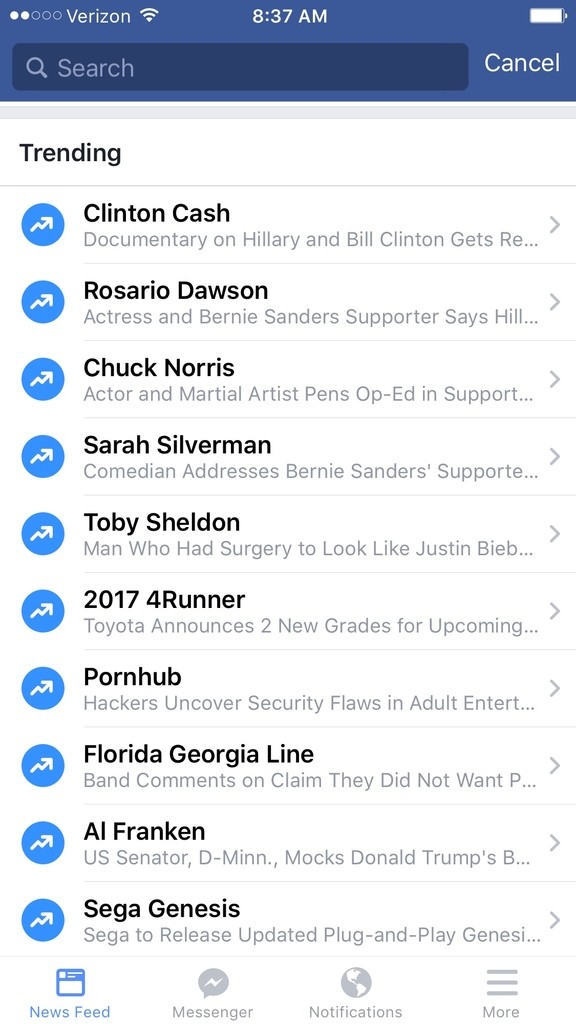 That Clinton Cash became the #1 trending topic on the world’s largest social media platform during the DNC should not shock anyone who has followed the success of the book and the global launch of the groundbreaking documentary.

Just 48 hours after its worldwide release, the Clinton Cash documentary had garnered more than 500,000 views online.

The film’s social media dominance was spurred, in part, by Bernie Sanders supporters who flocked to Facebook and Twitter and urged their followers and fans to watch the film and share it.

As Breitbart News reported, the film was pushed heavily on social media by more than 283,000 diehard Bernie Sanders supporters, who helped catapult Clinton Cash to the top of Facebook’s trending topics list on Sunday.

Due to overwhelming response and request, Breitbart News has decided to make Clinton Cash available for free forever. Click here to access.

The Clinton Cash documentary exposes the alarming pattern of record-high speaking fees to Bill Clinton and donations to the Clinton Foundation from foreign contributors, which coincided with favors for those closest to the Clintons and their foundation donors while Hillary Clinton served as secretary of state. This was exposed in the New York Times bestseller  Clinton Cash, authored by Government Accountability Institute President and Breitbart Senior Editor-at-Large Peter Schweizer (due out in paperback on Tuesday, July 26.)

What’s more, the much-anticipated Clinton Cash graphic novel, due out August 8th, is sure to capture the moral imagination of the millennial audience for years to come.