U2 frontman Bono bashed President Donald Trump in a lengthy Rolling Stone cover story this week, lamenting Trump’s criticism of the press and said the election of the real estate mogul and the current political climate “is surely the bleakest era since Nixon.”

“In the Western world, in our lifetime, there has never been a moment, until very recently, when fairness and equality was not improving,” the Irish rocker said. “There were setbacks, but it was as if the world was on a trajectory toward fairness and justice and equality for all.”

But then the election of Trump happened, Bono said, and then “People’s innocence had died. And a generation that had grown up thinking that the human spirit had a natural evolution toward fairness and justice was learning this might not be the case.”

“My attitude was, ‘OK, good. Now it is time we wake up and realize we can’t take any of this for granted.’ Big primates have been around a lot longer than democracy, and this dude who shall not be named – he is just a new manifestation of that big primate,” the 57-year-old said of Trump who he believes he can’t work with on policy “because you can’t believe what he says.”

“We got shook. Even in Europe, people have forgotten what fascism did to them. Whether it was fascism described as Stalin or Mao in the state communism, whatever you want to call it. It is forgotten.”

“We are actually going back to the way we used to be. The new normal is the old normal. That is terrifying. The demonizing of ‘the other’ has returned,” he added. 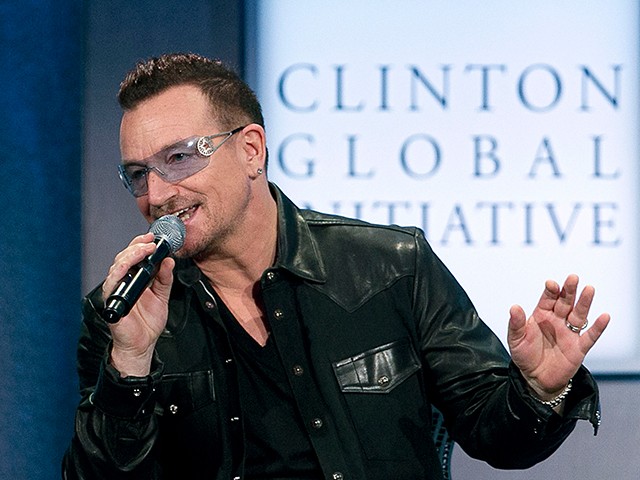 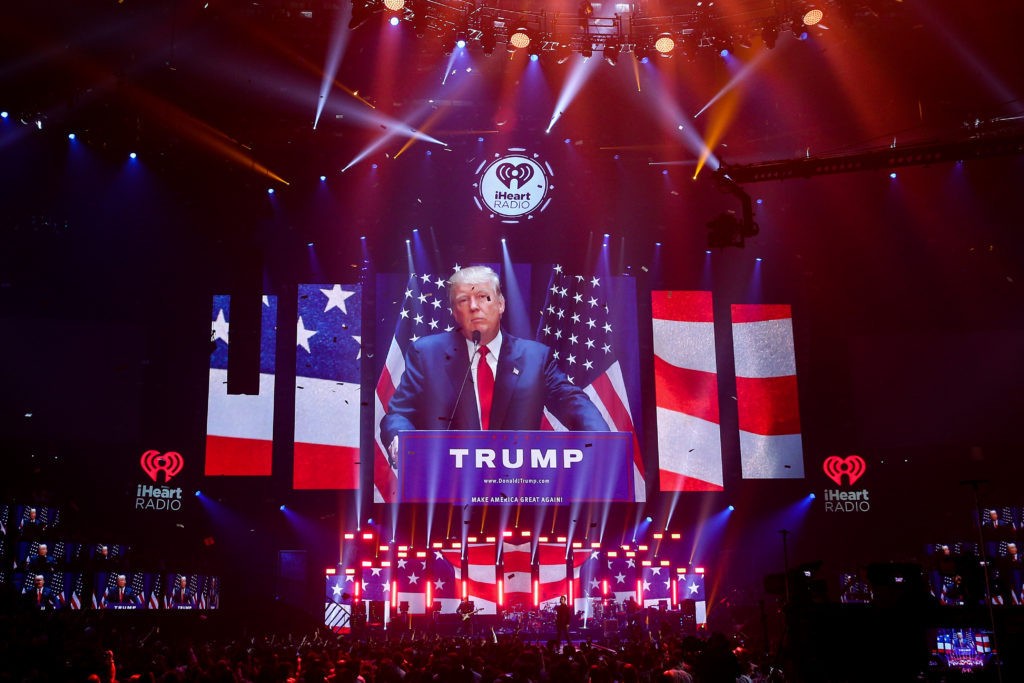 Bono of the music group U2 performs at the 2016 iHeartRadio Music Festival – Day 1 held at T-Mobile Arena on Friday, Sept. 23, 2016, in Las Vegas. (John Salangsang/Invision/AP)

Bono also bemoaned President Trump’s criticism of the press, saying, “Democracy is a remarkable conceit that depends on an effective news media. So ‘fake news’ is not a fake threat. You have a post-truth president leading a post-trust country.”

“What also should be easy to read are the lessons the left and right need to learn from how this absurdity came about,” he continued. “It shouldn’t take a reality-TV star to read the boos and hisses of discontent people ready to roll the dice on business not as usual. We all need to do a better job of understanding where that anger and sense of displacement comes from.” 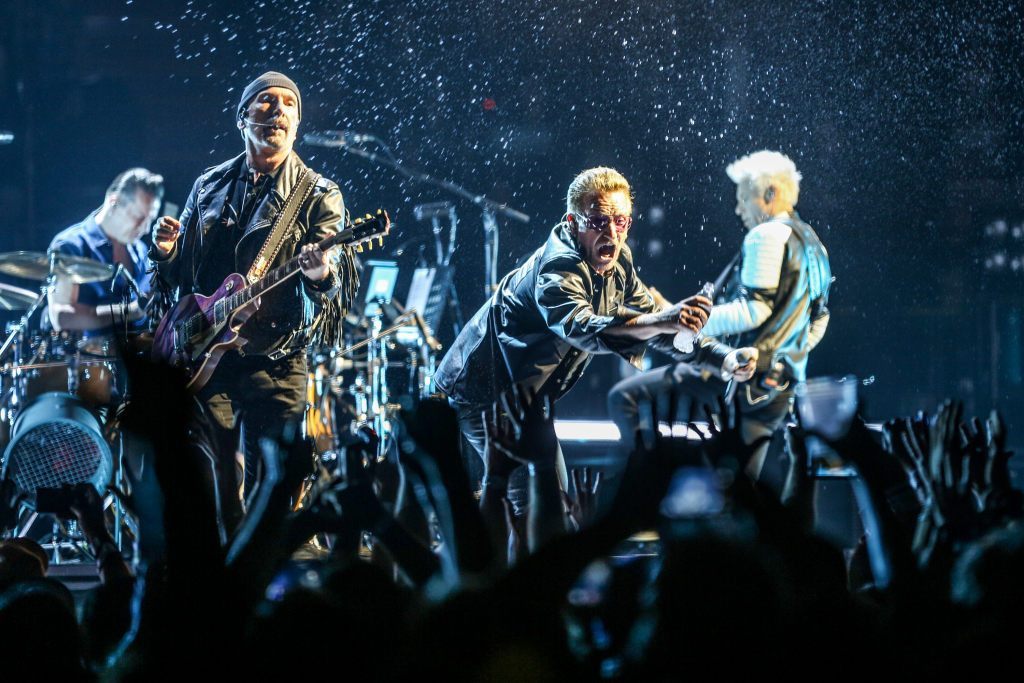 The Edge, Bono and Adam Clayton of U2 perform at the Innocence + Experience Tour at The Forum in Inglewood, Calif. (Rich Fury/Invision/AP, File) 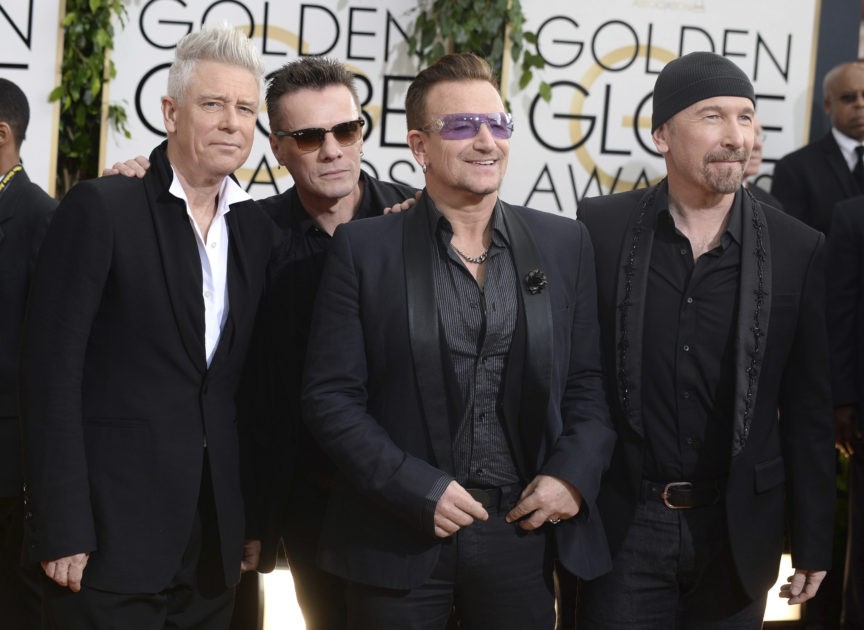 Adam Clayton, Larry Mullen, Jr., Bono, and The Edge at the 71st annual Golden Globe Awards at the Beverly Hilton Hotel in Beverly Hills, Calif. Clayton thanked his bandmates on Monday, June 26, 2017, for their support during his treatment and recovery from alcohol abuse years ago, before joining them for a rollicking rendition of a few hits. (Jordan Strauss/Invision/AP, File)

During a politically charged concert in New Jersey last June, the Grammy-winner praised the American media for remaining “vigilant” in the Trump-era.

Asked by Rolling Stone if there can be hope after Trump, Bono said, “I think the moment just has to be reclaimed. This is surely the bleakest era since Nixon. It surely undermines the very idea of America, what is going on now. And Republicans know it, Democrats know it – no one’s coming off well here.”

“We know some who should know better have tried to piggyback the man’s celebrity to get stuff done. They will live to regret it,” said Bono. “Before I went out against him in the primaries, I called a lot of Republican friends that I have and said, ‘I can’t in all conscience be quiet as this hostile takeover of your party and perhaps the country happens.’ And I made the quote, and I still stand by it, ‘America is the greatest idea the world has ever had, and this is potentially the worst idea that has ever happened to it.'”

Last January, U2 founding guitarist The Edge revealed that the band’s latest album Songs of Experience, which was released on December 1, was initially delayed because of Trump’s election.

In September, Bono ripped President Trump’s decision to rescind the DACA amnesty program. “It’s a strange place we find ourselves in. It’s dangerous out there when you have a little emperor there with a bad haircut and his finger on the nuclear arsenal. And a lot of people in silly costumes following me around. And then you have the dude from North Korea,” Bono said about Trump and North Korean dictator Kim Jong-un.