A new movie coming out in theatres on Friday, Chappaquiddick, is a tragic drama revealing the sordid details and political damage-control surrounding the night that Sen. Ted Kennedy’s (D-MA) car went off a bridge near Edgartown, Massachusetts, leading to the death of young Mary Jo Kopechne and devastating damage to Kennedy’s presidential ambitions.

Romantic images of Camelot have surrounded the Kennedys since the election of John F. Kennedy (JFK) as president in the 1960s and became a national pastime after JFK’s assassination in 1963. That pastime became an obsession when JFK’s brother and attorney general, Sen. Robert F. Kennedy (D-NY) (RFK), was assassinated in 1968, as RFK was about to become the Democratic nominee for president and was heavily favored to win the White House.

At that point, Sen. Ted Kennedy, the youngest and only remaining son of Ambassador Joseph Kennedy, became a household name and was considered an inevitable presidential candidate. When Ted decided not to try taking his brother’s place on the 1968 ticket, the massive Kennedy machine that controlled much of the national Democratic Party developed a four-year plan to propel the 37-year-old heir to the Kennedy dynasty to 1600 Pennsylvania Avenue.

Chappaquiddick explores a tragedy of Shakespearean dimensions, as Ted Kennedy became embroiled in a massive national scandal that ultimately doomed his plan to follow his late brother into the White House.

The movie begins the week that America sent its first astronauts to the moon, an inspiring thought that JFK had challenged the nation with in 1961. The opening scene shows Ted, played by Jason Clark, sitting for a national interview talking about his brother’s legacy, and how the week’s upcoming epochal event of landing on the moon on July 20 would be an enduring part of that legacy. All this is setting the stage for Ted to run for president against President Richard Nixon in 1972.

The focus then shifts to planning for a party on Chappaquiddick Island, near Martha’s Vineyard in Massachusetts. Those invited were Ted, a couple of his closest high-powered male friends, and the “Boiler Room Girls” – a group of attractive, young, single women who had worked on Bobby Kennedy’s 1968 presidential campaign prior to his assassination.

The house party involves lots of alcohol and the scene looks ripe for bad decisionmaking. Late in the evening on July 18, 1969, the 37-year-old Ted takes the 28-year-old Kopechne, played by Kate Mara, out for a drive. Instead of turning left toward the ferry back to Edgartown on the mainland, Ted turns right, taking Kopechne toward a private beach at 11:15 p.m. 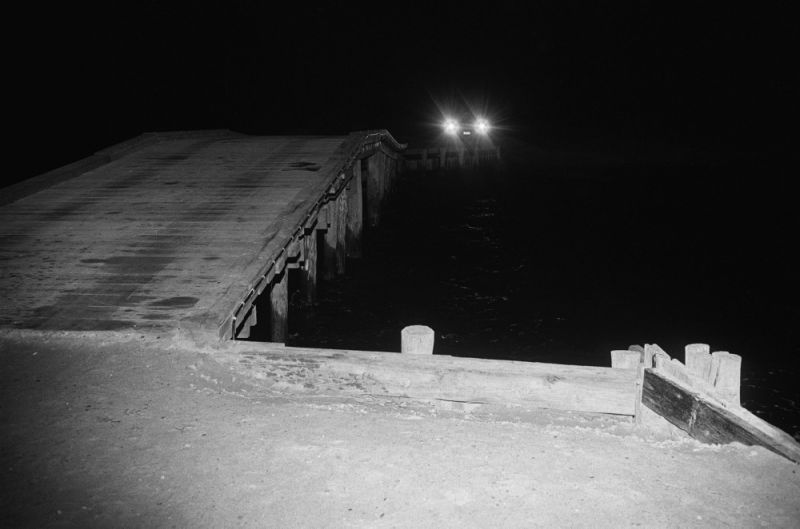 Suddenly Kennedy’s 1967 black Oldsmobile goes off a low, narrow bridge at an angle, apparently due to drunk driving, according to the movie, and the car flips onto its roof in what looks to be about six feet of water. Somehow Ted makes it out of the vehicle and to the surface, leaving Kopechne behind. 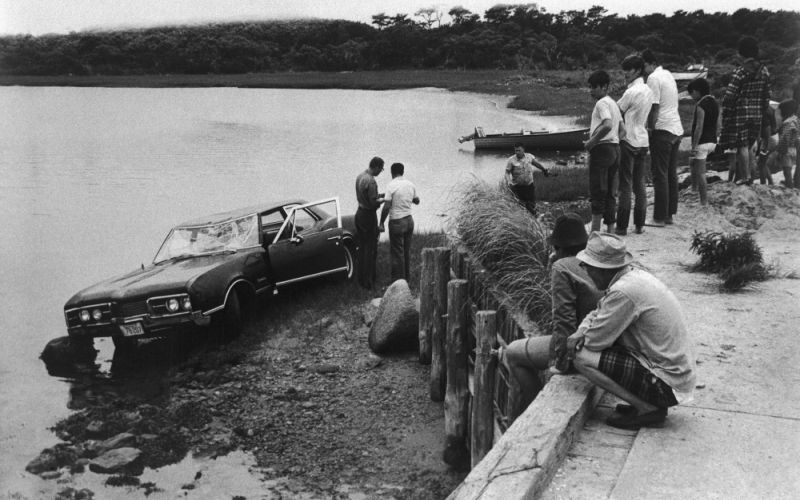 Kennedy appears to think Kopechne has died, and eventually walks back to the party house to get his cousin and lawyer, Joe Gargan, and Paul Markham, who courtesy of Kennedy’s support as home-state senator has been appointed U.S. attorney for Massachusetts.

The movie explores the drama of the men’s unsuccessful efforts to get back into the car, followed by Kennedy’s not acting on Gargan and Markham’s legal and political advice to call the police immediately. Kennedy instead reports it the next morning.

During these events, the movie flashes back to the car, where Mary Jo is still alive, able to breathe in a large air bubble in the car, but not able to escape the vehicle. These uncomfortable scenes are based on the after-crash investigation and examination of her body suggesting that Kopechne died of suffocation, rather than drowning, which would mean that she survived the car’s flipping into the water and only died hours later when she consumed all the remaining oxygen, at a time when Kennedy was asleep back in his hotel room, not having called the police at that point.

The movie rolls through the discovery of the crash and the police response, including a police diver telling the police chief, “I could have had her out of that car in 25 minutes if I’d got the call, but no one called.”

Chappaquiddick then shifts to the unfolding scenario of the elderly Joseph Kennedy’s marshaling his political machine – including some of JFK’s senior aides, such as Defense Secretary Robert McNamara – talking about how to manage the public narrative to preserve Kennedy’s presidential hopes.

Kennedy at times earlier in the movie appeared somewhat sympathetic, haunted by the deaths of JFK and RFK, being the only brother who failed to win his father’s approval or live up to his siblings, and struggling with personal demons. But at this point he is portrayed as a calculating, lying politician willing to say or do anything to stay in power and have a shot at the White House.

Kennedy changes his story as to whether he or Kopechne was driving the car. He later wears a neck brace to Kopechne’s funeral, shown to be a prop when the media notices both that he was not wearing one shortly after the crash, and also that he could crane his neck in it to look back over his shoulder during the funeral service. His spokesperson likewise steps in it when he tells the New York Times that Kennedy’s spontaneous comments the morning after the crash should be ignored because the senator both had a concussion and was given sedatives by his doctor, only to have the Times’ editor expose the lie by replying to the spokesmen that doctors would generally not give sedatives to someone with a concussion.

Aides surrounding Kennedy manage both the political fallout and the legal jeopardy of Kopechne’s death, realizing that the senator could be charged with the felony of involuntary manslaughter and that his driver’s license had expired. Ultimately, Kennedy cuts a deal to plead guilty to leaving the scene of an accident and receives a two-month jail sentence that is suspended, meaning that he never spends a day behind bars.

Kennedy gives his politically polished account in a national address, placing himself at the voters’ mercy. The movie closes with historical footage of Massachusetts voters saying they will vote to keep Kennedy in the Senate, but also includes a text that he ran for the Democratic nomination against President Jimmy Carter in 1980, but never won the presidency.

Chappaquiddick is a balanced portrayal of the event, although fans of the Kennedy clan are likely to dispute that assessment. It does not show graphic details or make salacious claims. It shows the human side of those who engaged in the deplorable actions portrayed in the movie. But it also does not sugarcoat the appalling nature and motivations of what actually happened on that fateful night.

It also may invite viewers to contemplate an alternative history. Many political experts believe that if this tragedy and the resulting scandal had never occurred, Ted Kennedy may have been elected president. Even if Nixon proved unbeatable in 1972, Kennedy could have been the Democratic nominee in 1976 or in a later election. Even had Kennedy run and lost, the history books would read differently today. Had Kennedy actually won, then America’s subsequent history would certainly be very different.

While there is some artistic license regarding private conversations and comments, Chappaquiddick is a tale of how the rich and powerful can get away with anything, working through lawyers who cut deals, politicos who manipulate public perception, and managing coverage through the establishment media.

It is also a cautionary rebuttal that the Left’s narrative about how politics have hit a new low under President Trump is belied by the fact that a presidential contender created a situation in which someone was literally killed, but that voters cannot act upon information that is concealed from them. Chappaquiddick is well worth watching.