PARIS (AP) — Karl Lagerfeld, Chanel’s iconic couturier whose designs had an unprecedented impact on the entire fashion industry, died Tuesday in Paris, prompting an outpouring of love and admiration for the man in the trademark white ponytail, high starched collar and dark enigmatic glasses who dominated high fashion for the past 50 years.

Although he spent virtually his entire career at luxury labels catering to the very wealthy — including 20 years at Chloe — Lagerfeld’s designs quickly trickled down to low-end retailers, giving him global influence.

Such was the enigma surrounding the German-born designer that even his age was a point of mystery for decades, with reports he had two birth certificates, one dated 1933 and the other 1938.

In 2013, Lagerfeld told the French magazine “Paris Match” he was born in 1935, but in 2019 his assistant still didn’t know the truth — telling The Associated Press he liked “to scramble the tracks on his year of birth — that’s part of the character.”

Chanel confirmed that Lagerfeld, who had looked increasingly frail in recent seasons, died early Tuesday in Paris. Last month, he did not come out to take a bow at the house’s couture show in Paris — a rare absence that the company attributed to him being “tired.”

“Thanks to his creative genius, generosity and exceptional intuition, Karl Lagerfeld was ahead of his time, which widely contributed to the House of Chanel’s success throughout the world,” the brand’s CEO Alain Wertheimer said. “Today, not only have I lost a friend, but we have all lost an extraordinary creative mind to whom I gave carte blanche in the early 1980s to reinvent the brand.”

Chanel said Virginie Viard, his longtime head of studio, will create the house’s upcoming collections. Chanel did not say whether her appointment was permanent.

Lagerfeld was one of the most hardworking figures in the fashion world, holding down the top design jobs at LVMH-owned luxury label Fendi from 1977, and Paris’ family-owned power-house Chanel in 1983. He lost around 90 pounds in his late 60s to fit into the latest slimline fashions. 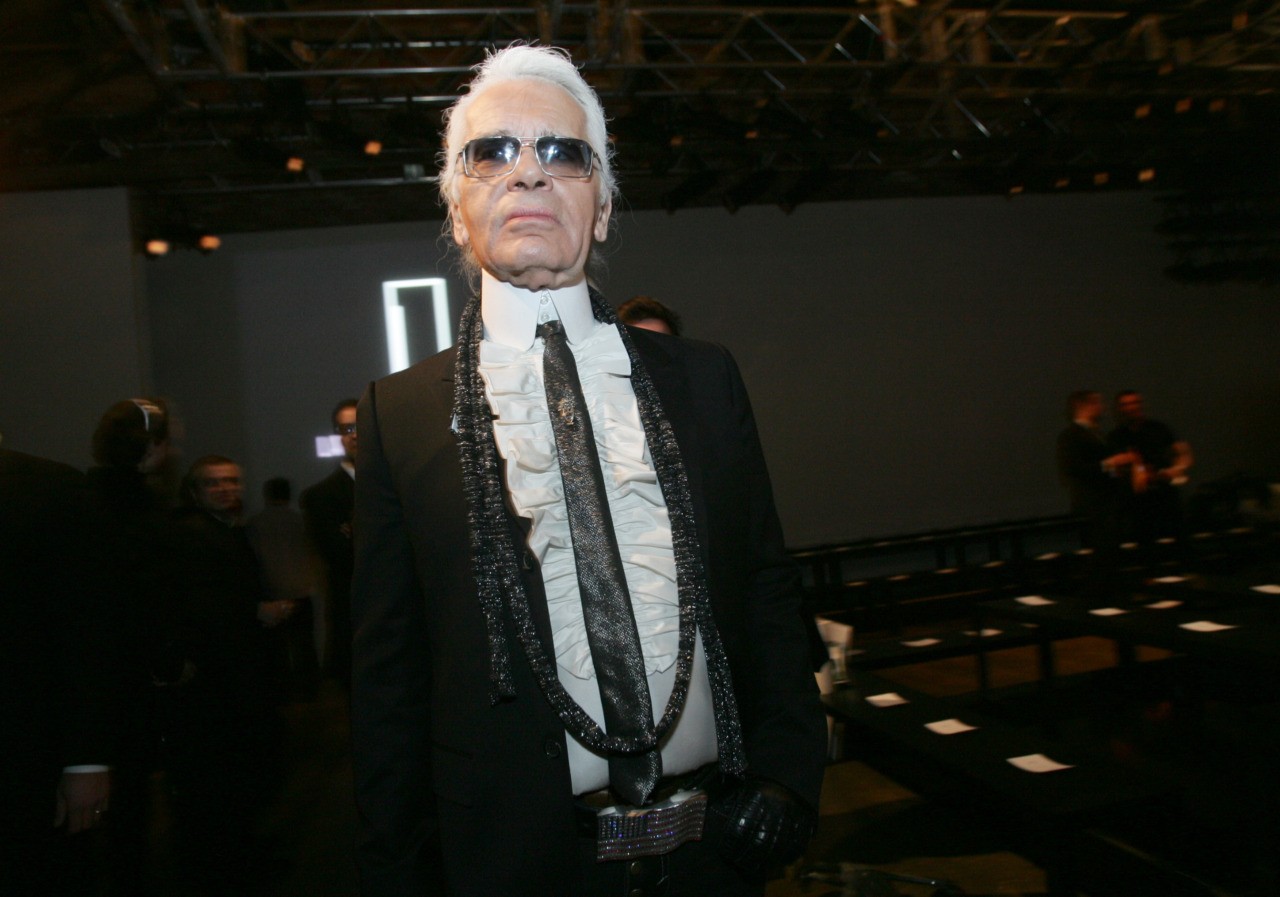 Karl Lagerfeld walks the runway before the presentation of his fall 2006 collection on the last day of Fashion Week in New York, Friday, Feb. 10, 2006. (AP Photo/Diane Bondareff)

At Chanel, he served up youthful designs that were always of the moment and sent out almost infinite variations on the house’s classic skirt suit, ratcheting up the hemlines or smothering it in golden chains, stings of pearls or pricey accessories. They were always delivered with wit.

“Each season, they tell me (the Chanel designs) look younger. One day we’ll all turn up like babies,” he once told The Associated Press.

His outspoken and often stinging remarks on topics as diverse as French politics and celebrity waistlines won him the nickname “Kaiser Karl” in the fashion media. Among the most acid comments included calling former French President Francois Hollande an “imbecile” who would be “disastrous” for France in Marie-Claire, and telling The Sun British tabloid that he didn’t like the face of Pippa Middleton, the Duchess of Cambridge’s sister.

“She should only show her back,” he advised.

Lagerfeld was also heavily criticized for sending out a negative message to women when he told France’s Metro newspaper that British singer Adele was “a little too fat.”

Despite this, he did have an under-reported soft side. He was known to be very kind to his staff at Chanel and was famous for giving journalists long interviews after each fashion show. He also shared his unmarried life in his Parisian mansion with a Siamese cat called Choupette.

“She is spoilt, much more than a child could be,” he told the AP in 2013, revealing that he took her to the vet nearly every 10 days.

Lagerfeld had little use for nostalgia and kept his gaze firmly on the future. Well into his 70s, he was quick to embrace new technology: He famously had a collection of hundreds of iPods.

A photographer who shot ad campaigns for Chanel and his own eponymous label, Lagerfeld also collected art books and had a massive library and a bookstore as well as his own publishing house. He was also an impressive linguist, switching between perfect French, English, Italian and his native German during interviews at fashion shows.

Although he spent much of his life in the public eye, Lagerfeld remained a largely elusive figure. Even as he courted the spotlight, he made an apparently deliberate effort to hide what was going on behind his trademark dark shades.

“I am like a caricature of myself, and I like that,” British Vogue quoted Lagerfeld as saying. “It is like a mask. And for me the Carnival of Venice lasts all year long.”

After cutting his teeth at Paris-based label Chloe, Lagerfeld consolidated his reputation in the 1980s when he revived the flagging fortunes of the storied Paris haute couture label Chanel. There, he helped launch the careers of supermodels including Claudia Schiffer, Ines de la Fressange and Stella Tennant.

In a move that helped make him a household name, Lagerfeld designed a capsule collection for Swedish fast-fashion company H&M in 2004 and released a CD of his favorite music shortly after.

A weight-loss book he published in 2005 — “The Karl Lagerfeld Diet” — consolidated his status as a pop culture icon. In the book, Lagerfeld said it was his desire to fit into the slim-cut suits by then-Dior Homme designer Hedi Slimane that had motivated his dramatic transformation.

The son of an industrialist who made a fortune in condensed milk and his violinist wife, Lagerfeld was born into an affluent family in Hamburg, Germany.

Lagerfeld had artistic ambitions early on. In interviews, he variously said he wanted to become a cartoonist, a portraitist, an illustrator or a musician.

“My mother tried to instruct me on the piano. One day, she slammed the piano cover closed on my fingers and said, ’draw, it makes less noise,” he was quoted as saying in the book “The World According to Karl.”

At 14, Lagerfeld came to Paris with his parents and went to school in the City of Light. His fashion career got off to a precocious start when, in 1954, a coat he designed won a contest by the International Wool Secretariat. His rival, Yves Saint Laurent, won that year’s contest in the dress category.

Lagerfeld apprenticed at Balmain and in 1959 was hired at another Paris-based house, Patou, where he spent four years as artistic director. After a series of jobs with labels including Rome-based Fendi, Lagerfeld took over the reins at Chloe, known for its romantic Parisian style.

Lagerfeld also started his own label, Karl Lagerfeld, which though less commercially successful than his other ventures, was widely seen as a sort of sketchpad where the designer worked through his audacious ideas.

In 1982, he took over at over Chanel, which had been dormant since the death of its founder, Coco Chanel, more than a decade earlier.

“When I took on Chanel, it was a sleeping beauty — not even a beautiful one,” he said in the 2007 documentary “Lagerfeld Confidential.” ″She snored.”

For his debut collection for the house, Lagerfeld injected a dose of raciness, sending out a translucent navy chiffon number that prompted scandalized headlines.

He never ceased to shake up the storied house, sending out a logo-emblazoned bikini so small the top looked like pasties on a string and another collection that dispensed entirely with bottoms, with the models wearing little jackets over opaque tights instead.

Lagerfeld was open about his homosexuality — he once said he announced it to his parents at 13 — but kept his private life under wraps. Following his widely known relationship with a French aristocrat who died of AIDS in 1989, Lagerfeld insisted he prized his solitude above all.

“I hate when people say I’m ‘solitaire’ (or solitary.) Yes, I’m solitaire in the sense of a stone from Cartier, a big solitaire,” Lagerfeld told The New York Times. “I have to be alone to do what I do. I like to be alone. I’m happy to be with people, but I’m sorry to say I like to be alone, because there’s so much to do, to read, to think.”

As much as he loved the spotlight, Lagerfeld was careful to obscure his real self.

“It’s not that I lie, it’s that I don’t owe the truth to anyone,” he told French Vogue in an interview.