Y’all know I love me some Fast & Furious, and have since the first one popped a whole 18-years-ago. Since the beginning, I’ve been there. From the down-and-dirty beauty of the street racing-highway hijacker formula in the original, to the Big Heist formula of Fast Five, to the Superspies Save the World genre it is now… these are my kind of movies. Love the action. Love the family theme. Really love the cast. And with the cucking of James Bond, it’s nice to know there’s still a franchise out there that’s fun, masculine, and sexy.

So if Universal wants to expand its unlikely blockbuster franchise, if the studio wants to “universe” this sucker, wants to “Marvel” this baby, count me in. More, please…

You have no idea how much I wanted to love Hobbs & Shaw. In fact, there was never any doubt I would. Of course this movie’s gunna rule! It’s Fast & Furious! They all rule!

Right away, though, something was off.

Out of all eight Fast & Furious movies, there is only one part where I’ve tuned out, and that’s in the most recent Fate of the Furious where the gang attempts to save the world from nuclear destruction by driving their muscle cars over a frozen waterway as a Russian sub breaks through the ice.

For the first time ever, I thought to myself: A submarine outracing a Lamborghini? Man, we’re a long way from East L.A.

It was so over the top, it was numbing; so absurd, my belief lost its suspension. That probably sounds ridiculous when we’re talking about a franchise that had a sports car successfully crash out of one skyscraper and safely land inside another, but I have a pretty high tolerance for the ridiculous. I love movies. What can I say?

Hobbs & Shaw, though, is 135 minutes of a Russian sub breaking through the ice and outrunning a Lamborghini. The action sequences are so outlandish, so disrespectful to things like gravity and bodily harm, that by the end of those 135 minutes, I was numb — and not just numbed by the CGI’d mayhem, numbed with disappointment.

Hobbs & Shaw is a Fast & Furious movie in name only. In fact, it’s much closer to a Marvel movie, just not in a good way (including endless end-title scenes).

In an unfortunate sign of things to come, we are introduced to the idea of technologically-enhanced super humans who can stop bullets and stuff, and because the movie makes no secret of the fact the arch-villain is still at large — a faceless, pro-science supremacist eager to replace the weak among us (like Beto O’Rourke and Cory Booker) with his computer-driven supermen — we’re only watching the first part of a franchise that intends to create a world where people have super powers. Like I said…

In this case our superman, or Black Superman as he calls himself, is Idris Elba, who is once again wasted by Hollywood (just make him James Bond already), who actually introduces himself as “the bad guy,” and who is totally on board with his boss’s supremacist view of the world.

What’s more, even when Hobbs (Dwayne Johnson) leaps out of a skyscraper, never do you believe he’ll end up with anything more than a bruise. 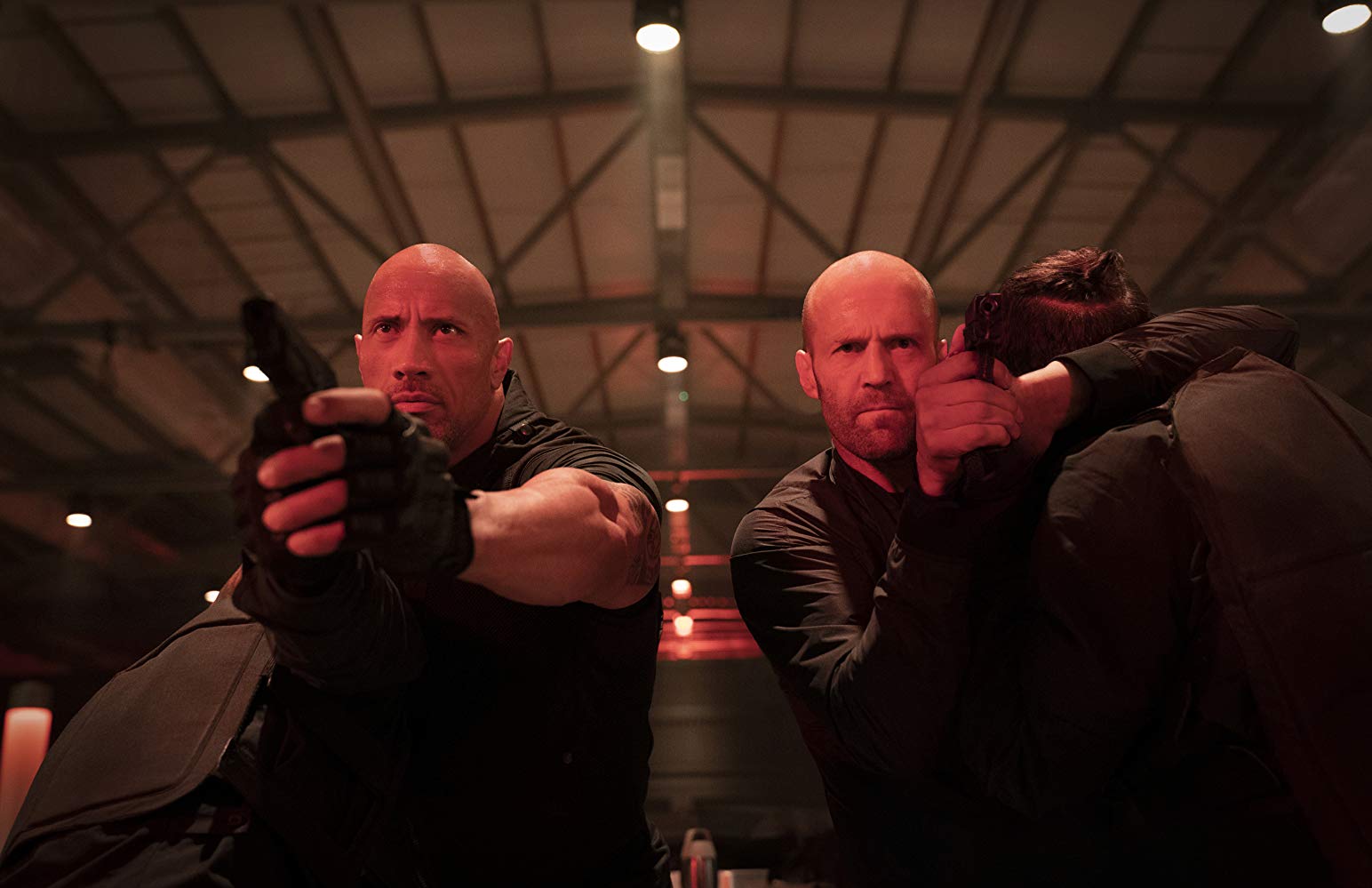 It probably doesn’t help that every 15 minutes or so the blockbuster machinery grinds to a halt so Hobbs and Shaw can bicker like a couple of old ladies. What was amusing in the original franchise gets pretty exhausting.

Chris Morgan, the genius screenwriter who has taken us from Tokyo Drift to that Russian sub, is the co-writer, and puts a lot of work into recreating the family theme that is the real reason for the original franchise’s longevity. He just tries too hard. Hobbs goes home to Samoa after 25 years and rather than a warm feeling of reunion, it feels forced — as in we’ve been forced to come along on Dwayne Johnson’s ego trip.

It’s no secret that Fast & Furious patriarch Vin Diesel and Johnson pretty much hate each other, and that’s probably why we got ourselves this spin-off; so you can’t help but wonder if this personal animus is part of the problem. What I mean is that with everything being so over the top — The action! The bickering! The heart! The big-star cameos! — Hobbs & Shaw kind of comes off like a bitter ex-husband strutting his young, pretty, but empty-headed girlfriend around in front of the ex-wife.

The bitterness between the two is so deep that Hobbs & Shaw never mentions or even acknowledges the mother ship.

I have no evidence to back this up, but the whole affair reeks of Johnson and Johnson’s Massive Ego trying wayyyy too hard to top Diesel, to steal away the franchise. Hobbs & Shaw is all kinds of pretty but it’s also empty-headed and monotonous…

Like its predecessors, Hobbs & Shaw gets a lot right. It’s apolitical. Men are men. Women are women. The Rock is an all-American guy’s guy. There’s a lovely theme about how easy it is to manipulate the corporate media, a humanist theme about fighting against dehumanizing technology…

The only winner here is Vin Diesel.