Millions of Americans across the country are honoring veterans of the United States military, our heroes, and recognizing their endless sacrifices this Veterans Day. This list highlights some of the actors, directors, singers, and producers who’ve served in the U.S. military.

The Oscar-winning director and movie star was drafted in 1951 during the Korean War and served at California’s Fort Ord as a lifeguard. The American Sniper director survived a Navy bomber crash in Northern California’s Point Reyes after visiting his parents in Seattle. 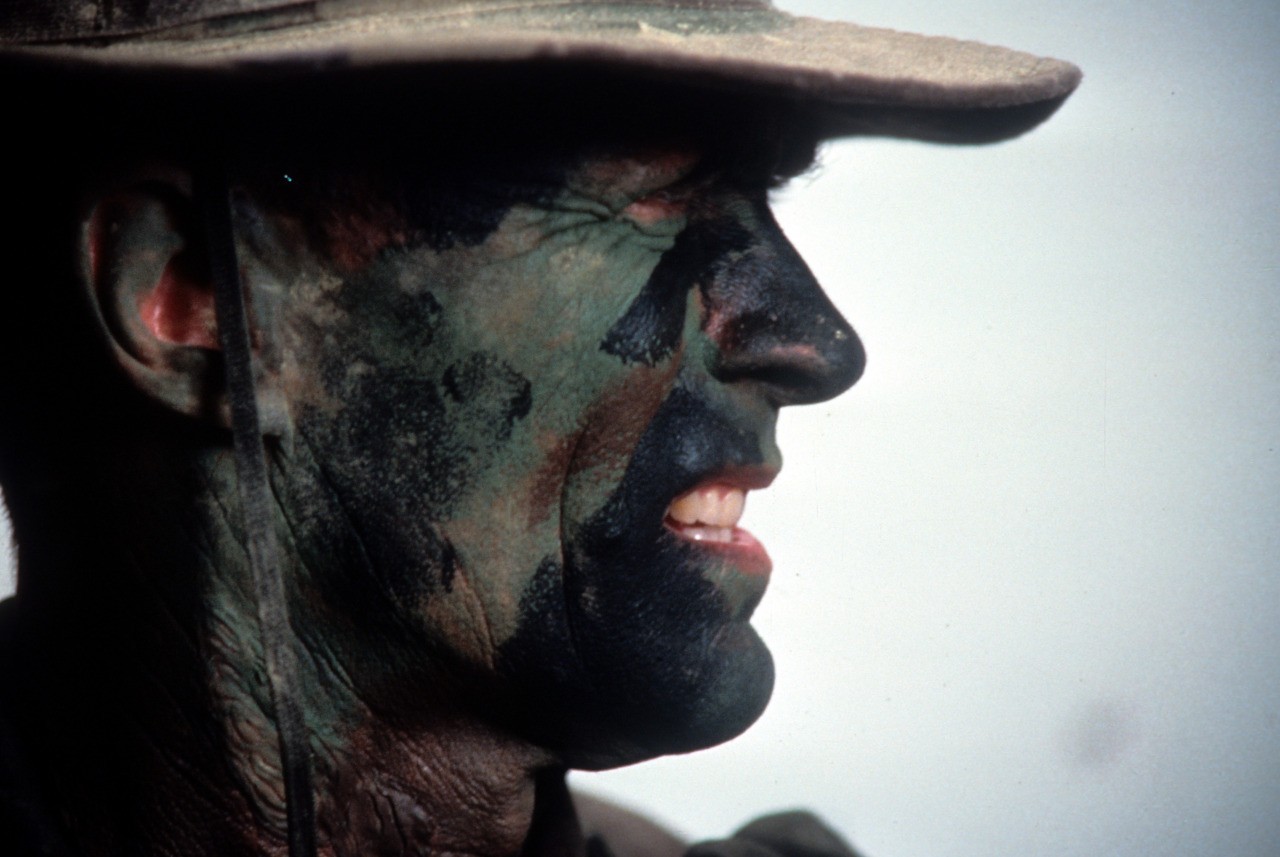 Clint Eastwood in facepaint in a scene from the film ‘Heartbreak Ridge’, 1986. (Warner Brothers/Getty Images)

“In those days, you could wear your uniform and get a free flight,” the Flags of Our Fathers director recalled. “On the way back, they had one plane, a Douglas AD, sort of a torpedo bomber of the World War II vintage, and I thought I’d hitch on that. Everything went wrong.”

The mixed martial artist, who starred in The Delta Force and Walker, Texas Ranger, joined the U.S. Air Force in 1958 and was sent to the Osan Air Base in South Korea, where he learned martial arts. 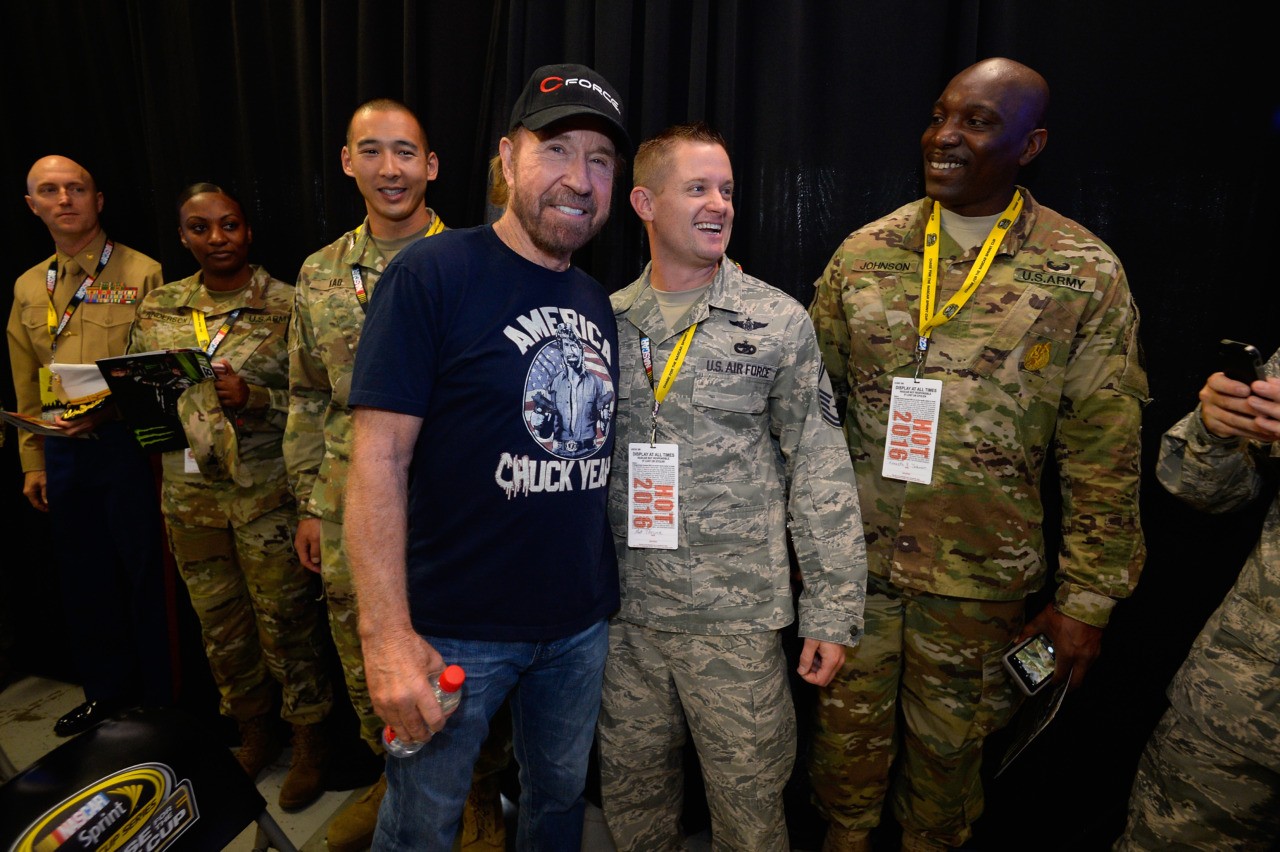 Norris was discharged in 1962 and appeared in The Wrecking Crew thereafter.

The It’s a Wonderful Life and Harvey actor was drafted in the U.S. Army in 1940, initially failing twice for medical reasons, standing 6’3” and weighing just 138 pounds. 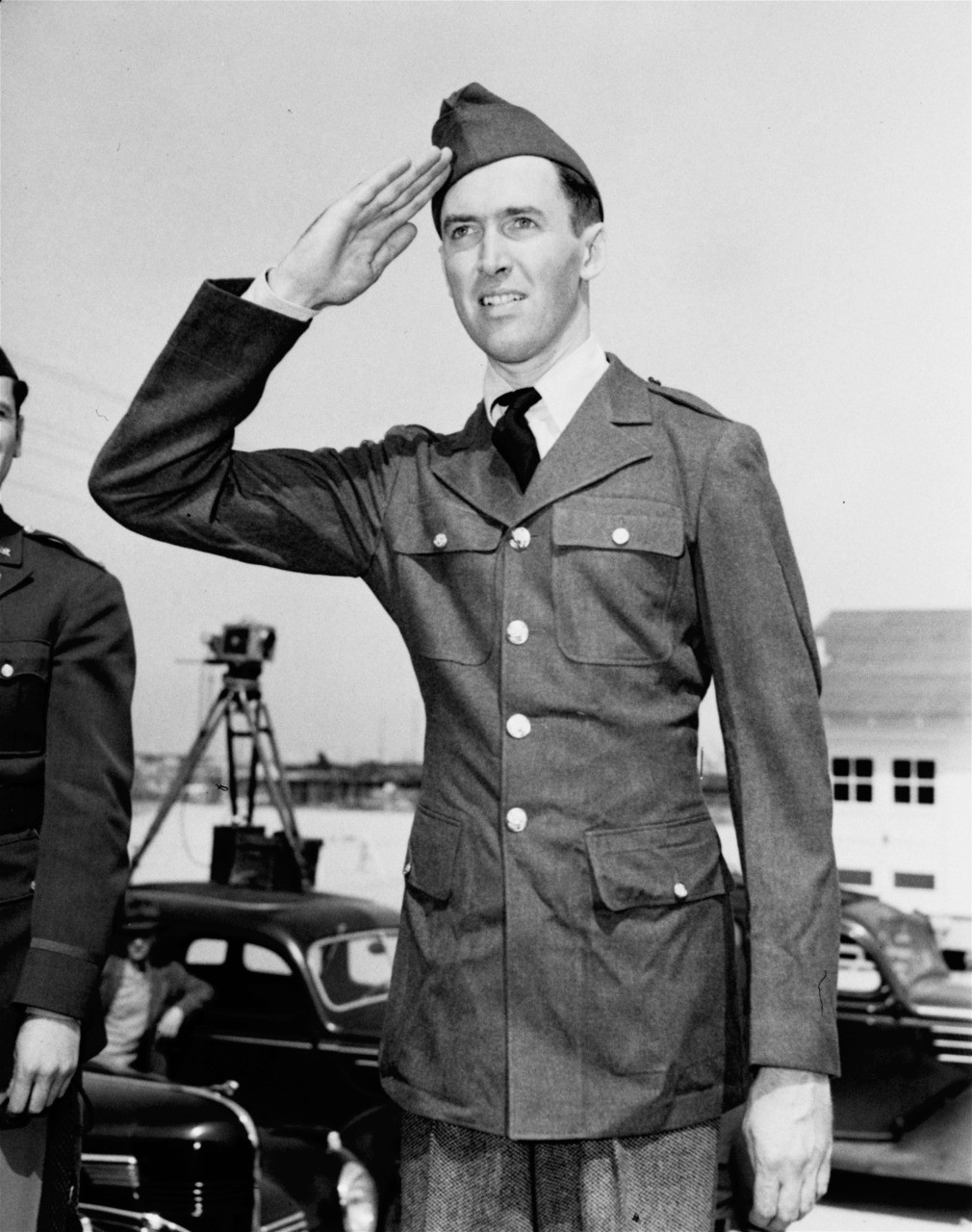 Jimmy Stewart, who won the Academy Award for acting, is shown at Fort MacArthur, Calif., March 22, 1941, in his new uniform after his induction earlier in the day in Los Angeles. He is a licensed pilot and hopes to go to the Army Air Corps. (AP Photo)

Stewart, wanting to serve his country, gained weight and enlisted in the Army Air Corps, passing with “an ounce to spare.” The Oscar-winner’s prior experience as a pilot bode him well, and he began to fly combat missions March 31, 1944.

“He was appointed Operations Officer of the 453rd Bomb Group and, subsequently, Chief of Staff of the 2nd Combat wing, 2nd Air Division of the 8th Air Force. Stewart ended the war with 20 combat missions. He remained in the USAF Reserve and was promoted to brigadier general on July 23, 1959,” according to Military.com. He retired in 1968.

The Gone with the Wind actor enlisted in the Army Air Force on Aug. 12, 1942, following his wife’s untimely death. He was 40 at the time, making him out of the range for the draft. 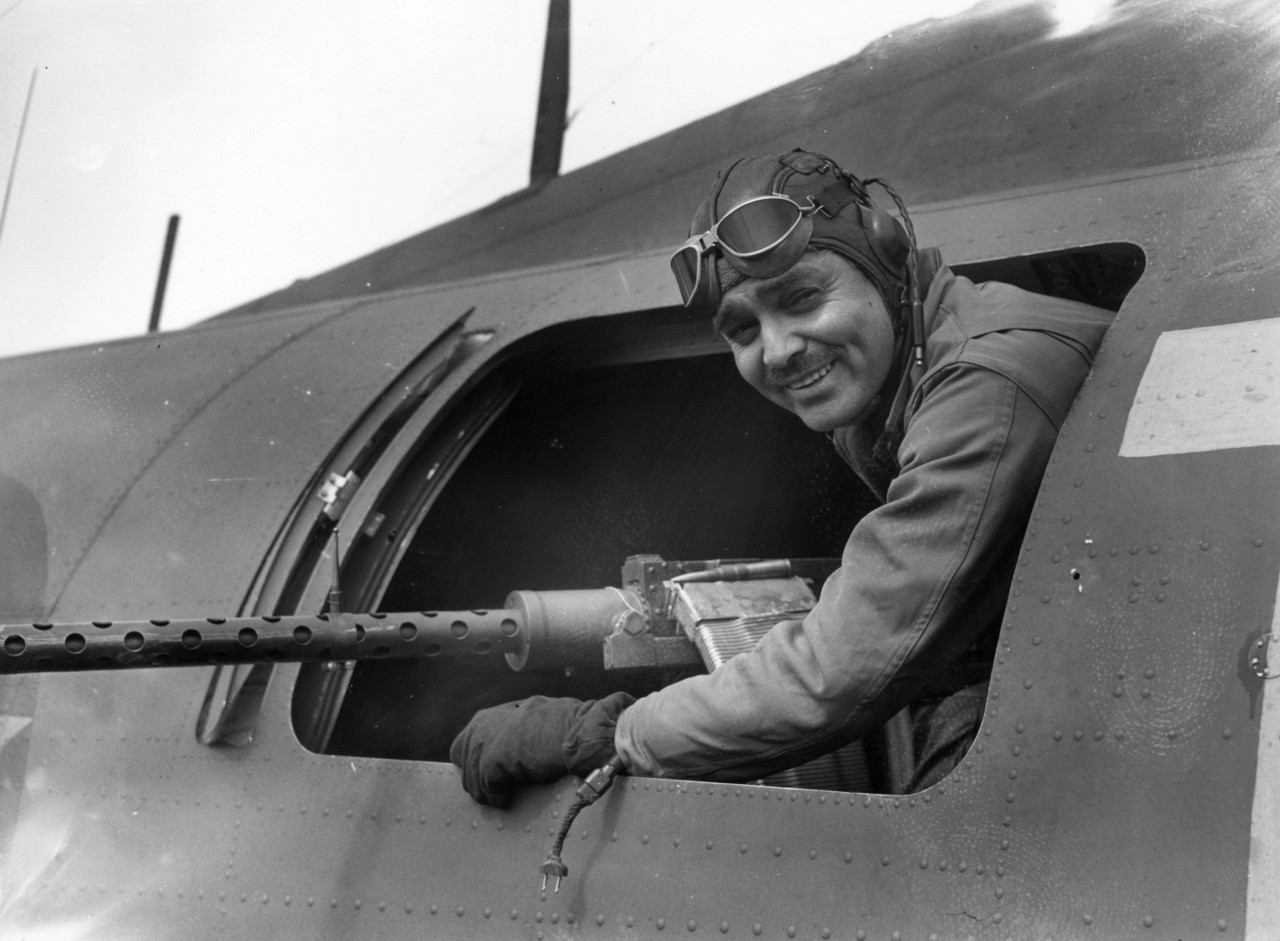 7th June 1943: US film actor Clark Gable (1901 – 1960) (right), who is serving as a gunnery instructor with the US Army Air Force ‘somewhere in England’, manning a weapon aboard an aircraft. (Keystone/Getty Images)

He graduated from the Officers’ Candidate School as a second lieutenant two months later with training as a photographer and aerial gunner. He is most well-known for traveling to Britain to film Combat America.

The 40th president served in the Army Air Force during World War II, combining his acting skills with his love of country, enlisting in the Army Enlisted Reserve on 29 April 1937 and ordered to active duty on April 19, 1942. Ronald Reagan leaves his hill top home in Los Angeles April 19,1942 for San Francisco where he was to report for active duty as a lieutenant in the U.S. Army. His wife, actress Jane Wyman and daughter, year-old Maureen Elizabeth see him off. Reagan holds a reserve commission in the cavalry. (AP Photo)

While he was limited by vision issues, his units produced “some 400 training films for the Army Air Forces,” including Recognition of the Japanese Zero Fighter and Beyond the Line of Duty.

The Burning Love singer had a military career spanning six years, entering the U.S. Army in March 1958. He “belonged to Company A, 2d Medium Tank Battalion, 37th Armor, stationed at Fort Hood, Texas” for much of 1958 before serving overseas in Germany “from October 1, 1958, until March 2, 1960, as a member of the 1st Medium Tank Battalion, 32d Armor.” 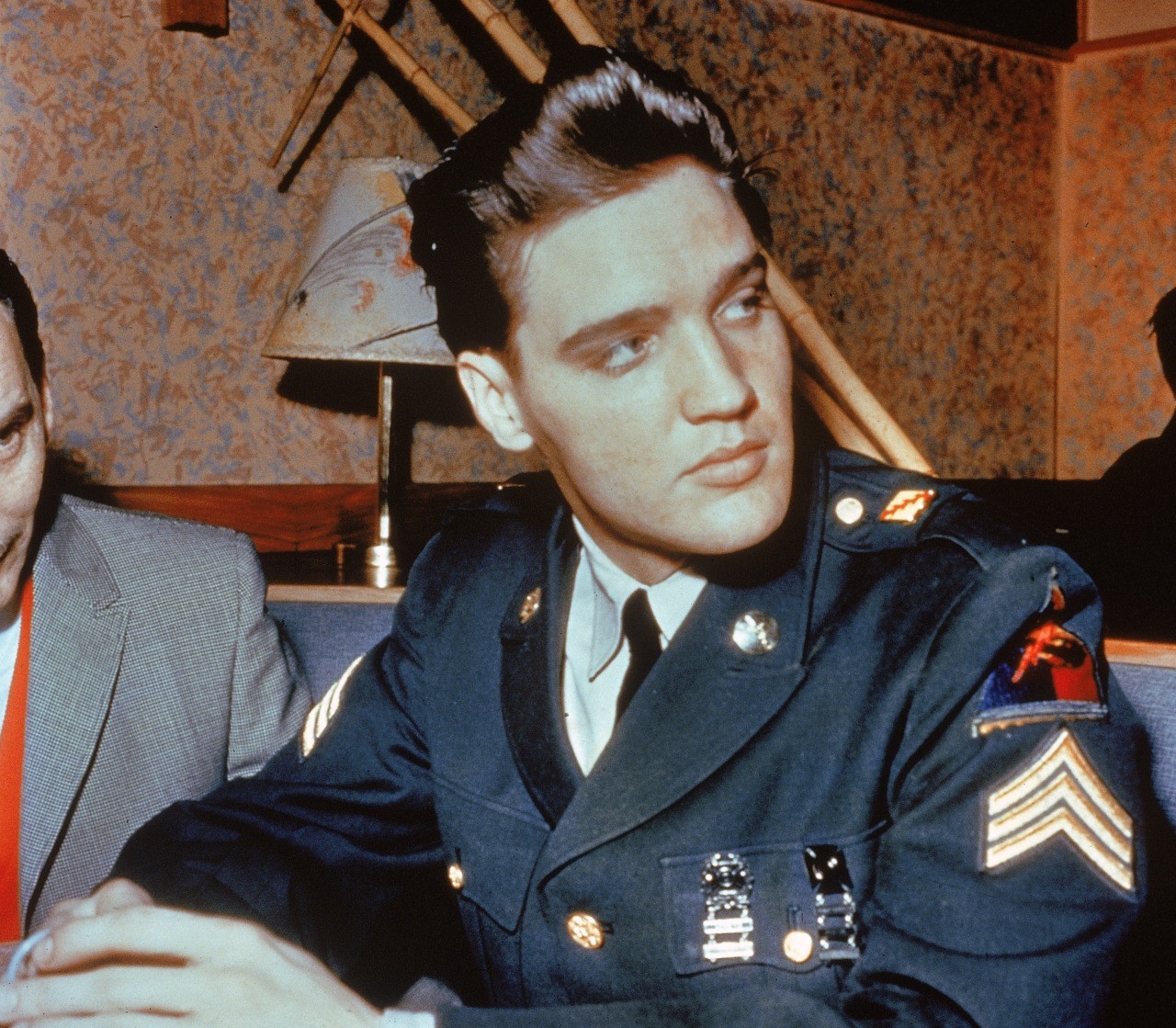 Circa 1958, American singer and actor Elvis Presley (1935 – 1977) sits in a restaurant wearing his US Army uniform. (Getty Images/Getty Images) 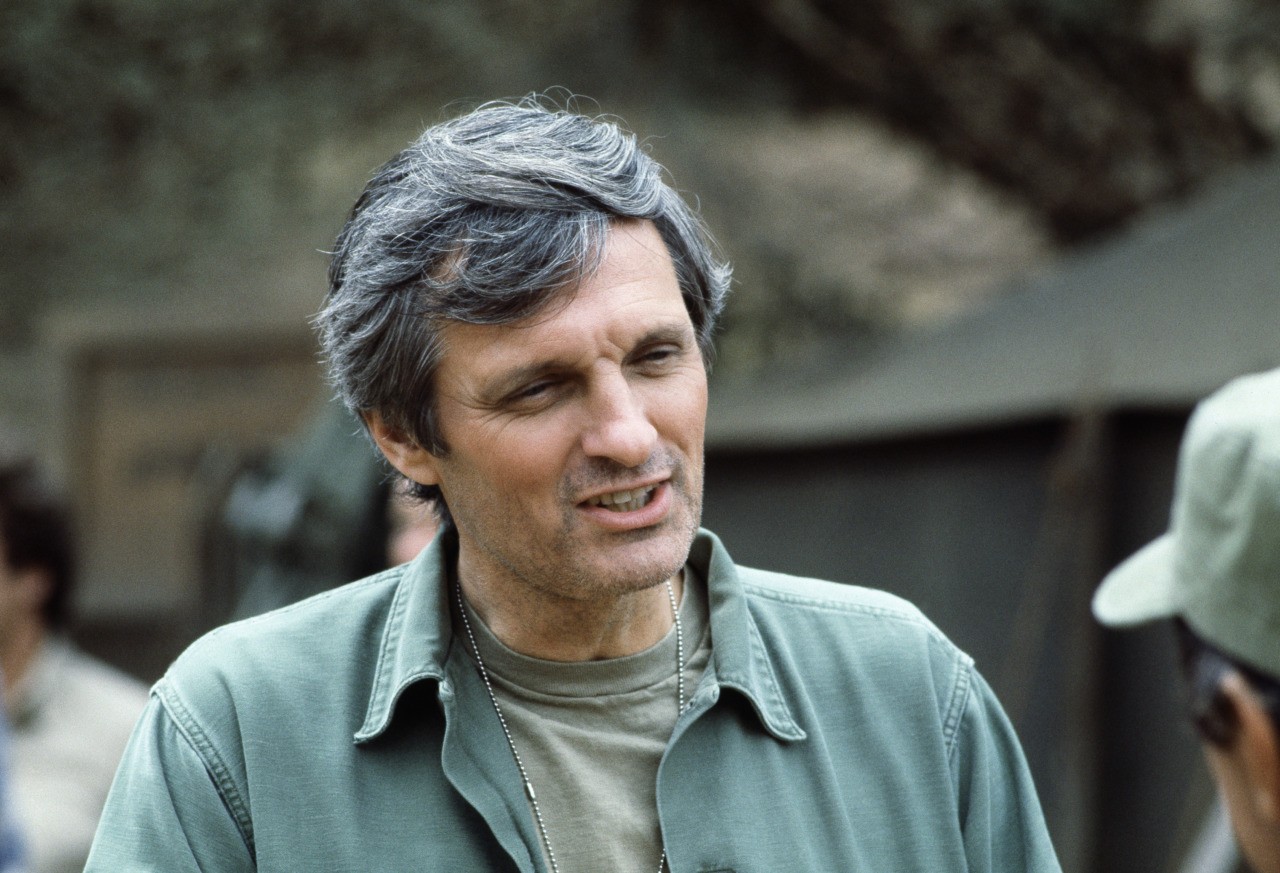 He served as a gunnery officer, ultimately completing a six-month tour of duty during the Korean War.

The actor, comedian, and producer served as a combat engineer in the U.S. Army during World War II, tasked with defusing land mines, according to Military.com. 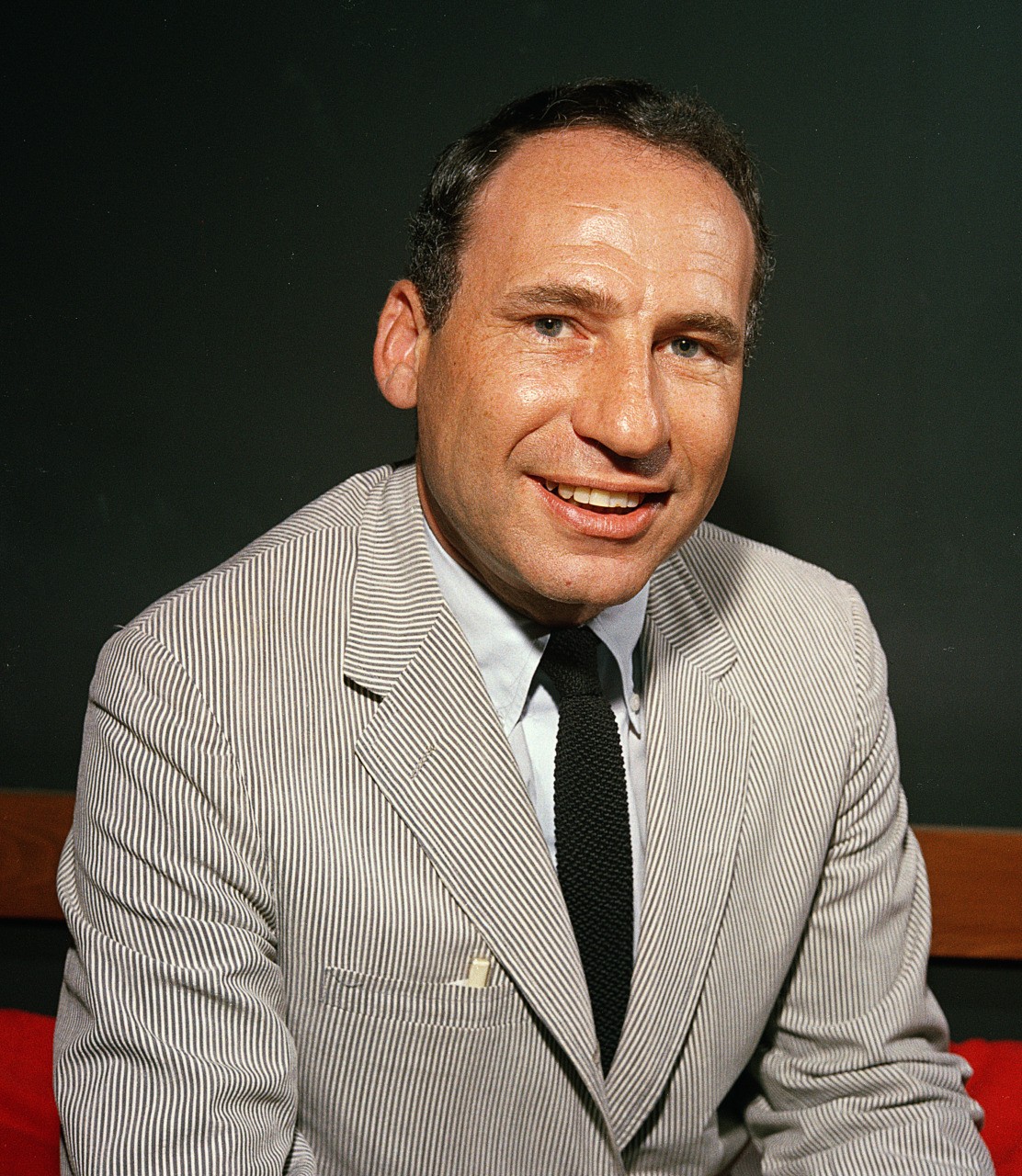 Comedian Mel Brooks is photographed in his New York City apartment in May 1966. (AP Photo)

The Blazing Saddles actor also fought in the Battle of the Bulge.

The Oscar-nominee and Emmy Award winner served as a military police soldier during the Korean War after graduating from the University of Texas. A 26-year-old Texan, Rip Torn is making progress as a Hollywood actor in spite of his name, which many producers have advised him to change, April 23, 1957. His real name is Elmore Torn, and Torn says he will sink or swim with it as an actor. After several small parts, he now has a big role in “Time Limit” and figures his name may become an asset: people will remember it. (AP Photo/Harold Filan)

Torn’s acting credits extended through the decades in theater, television, and movies from the Men in Black franchise to The Larry Sanders Show. 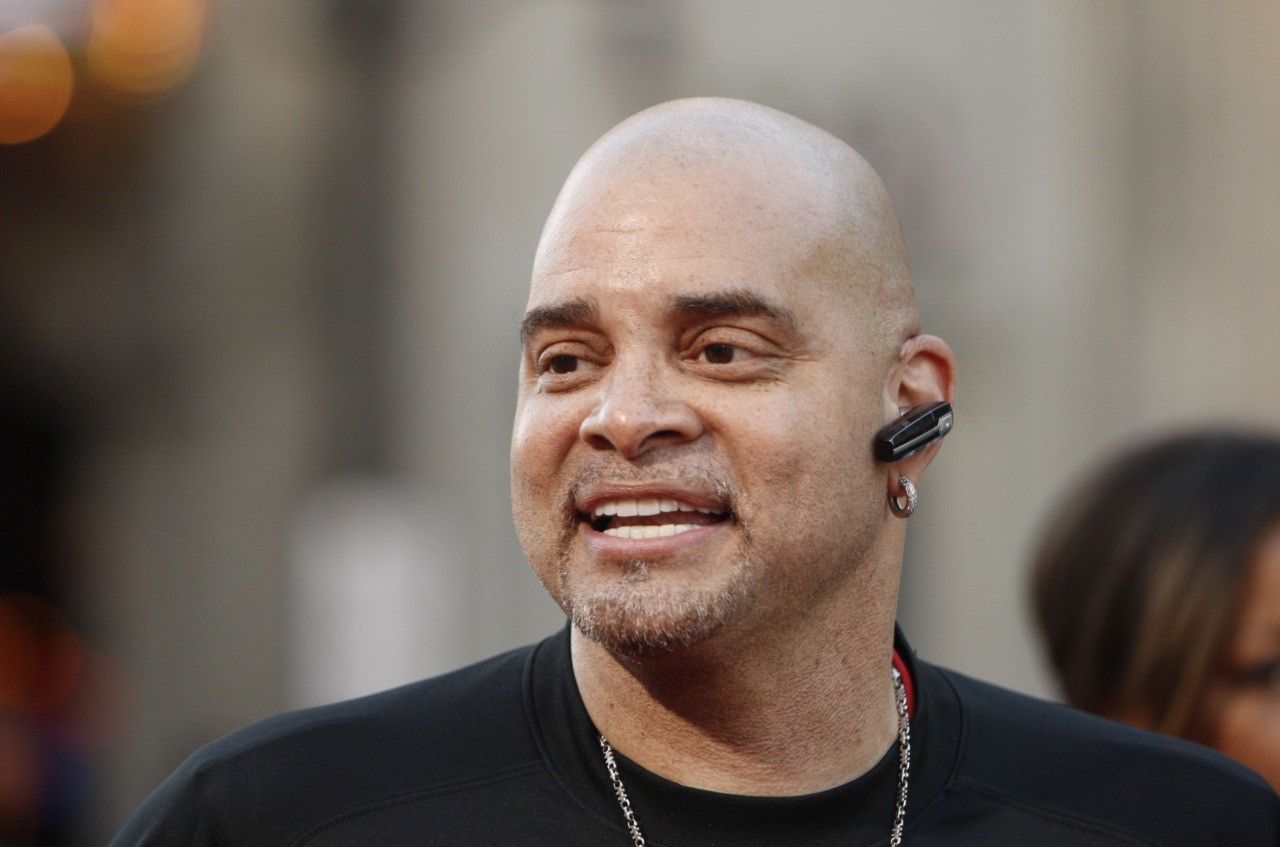 “I was an Air Force man back in 1979. I started off doing comedy for Tops in Blue. I tried out for Tops in Blue back in, oh, God, man, 1980. I did that because I knew comedy was what I wanted to do. I was kind of lost in my life, and it was because of the Air Force – although I was a crazy Airman; I was a nut when I was in the military. Having been in the military, I know what it’s like to be away. As cool as these places are, you’re still away from everything,” Sinbad said.

Widely known for playing Gunnery Sergeant Hartman in the 1987’s Full Metal Jacket, Ermey served in the Marine Corps for over a decade, working as a Drill Instructor and ultimately arriving in Vietnam in 1968. 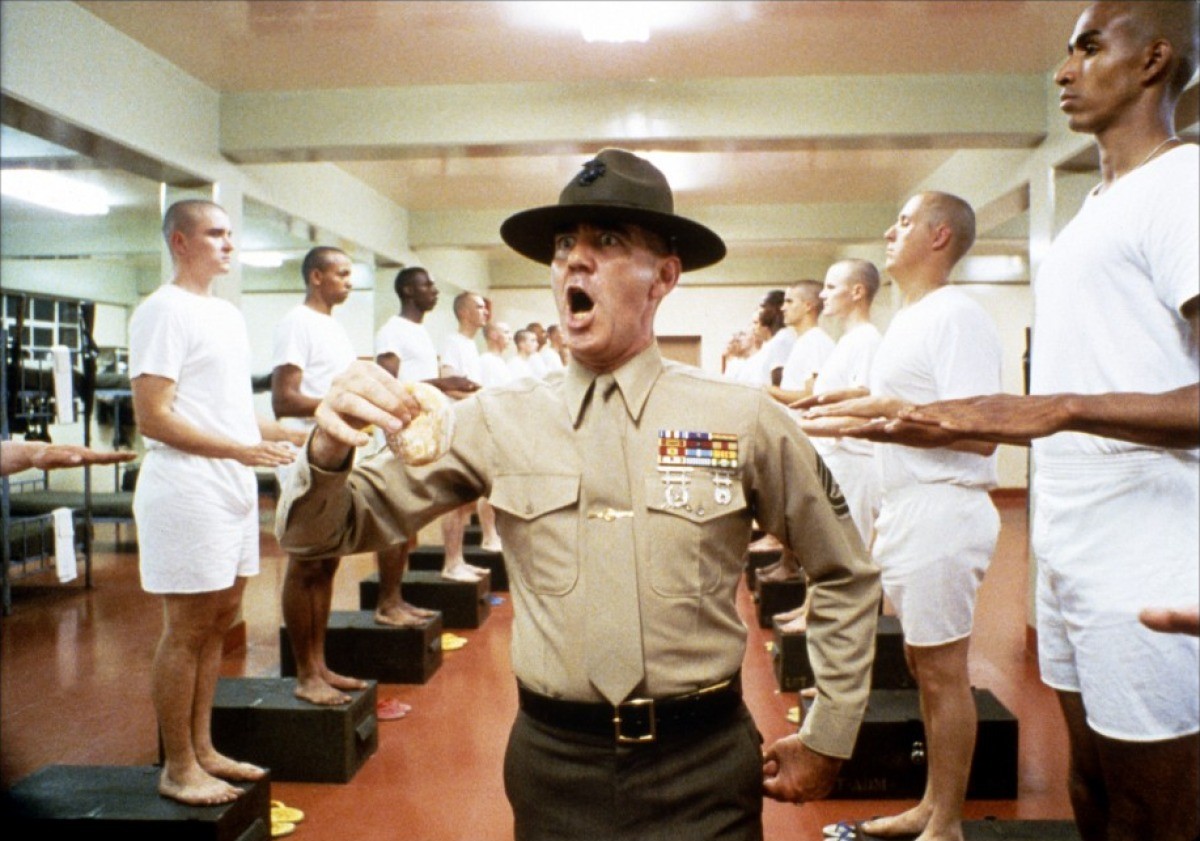 The Shawshank Redemption star turned down a scholarship to Jackson State University to join the U.S. Air Force. 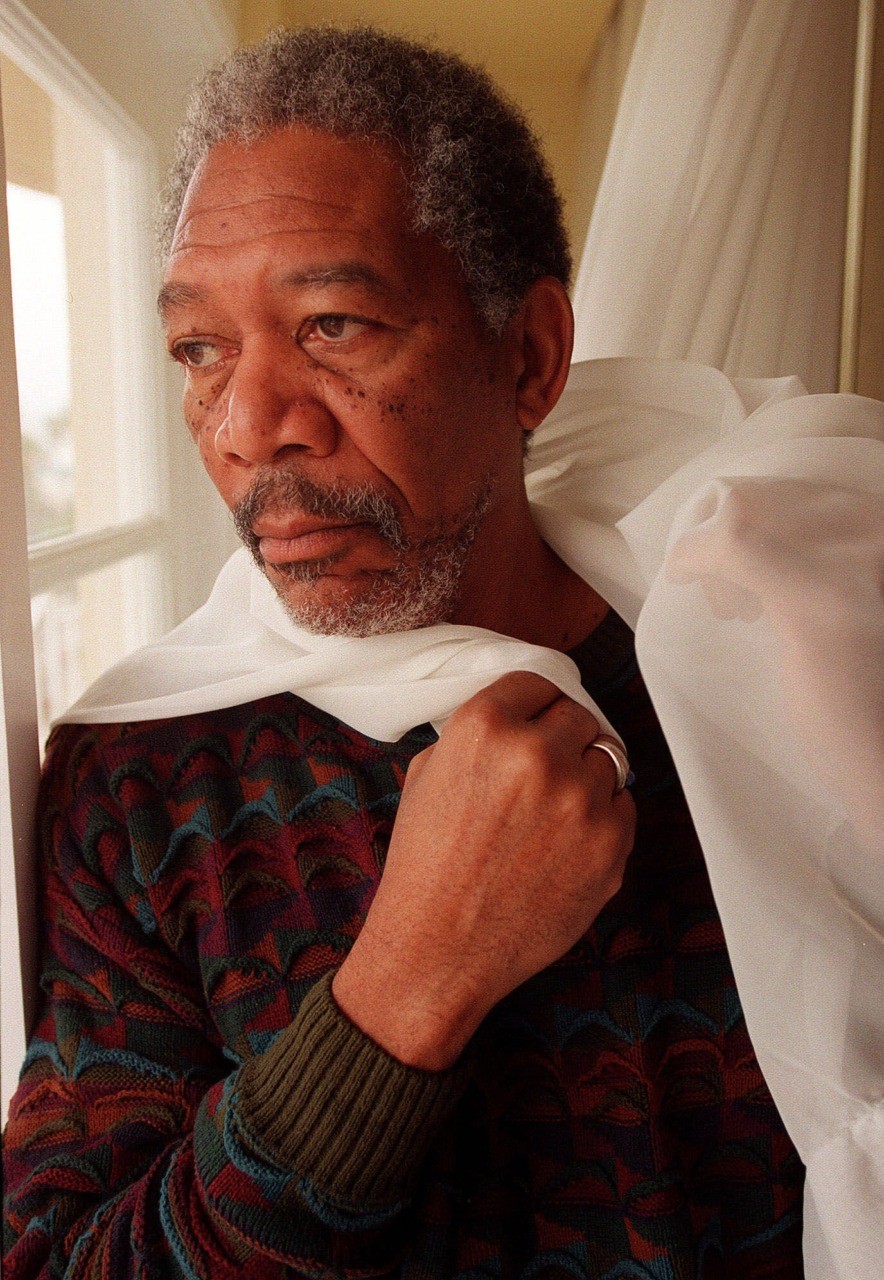 From 1955-1959, Freeman served as a radar technician and “rose to the rank of Airman 1st Class,” according to TheWrap.

The Magnum P.I. actor served in the California Army National Guard between 1967 to 1973 in the 160th infantry regiment. Selleck has spoken highly of his days serving. 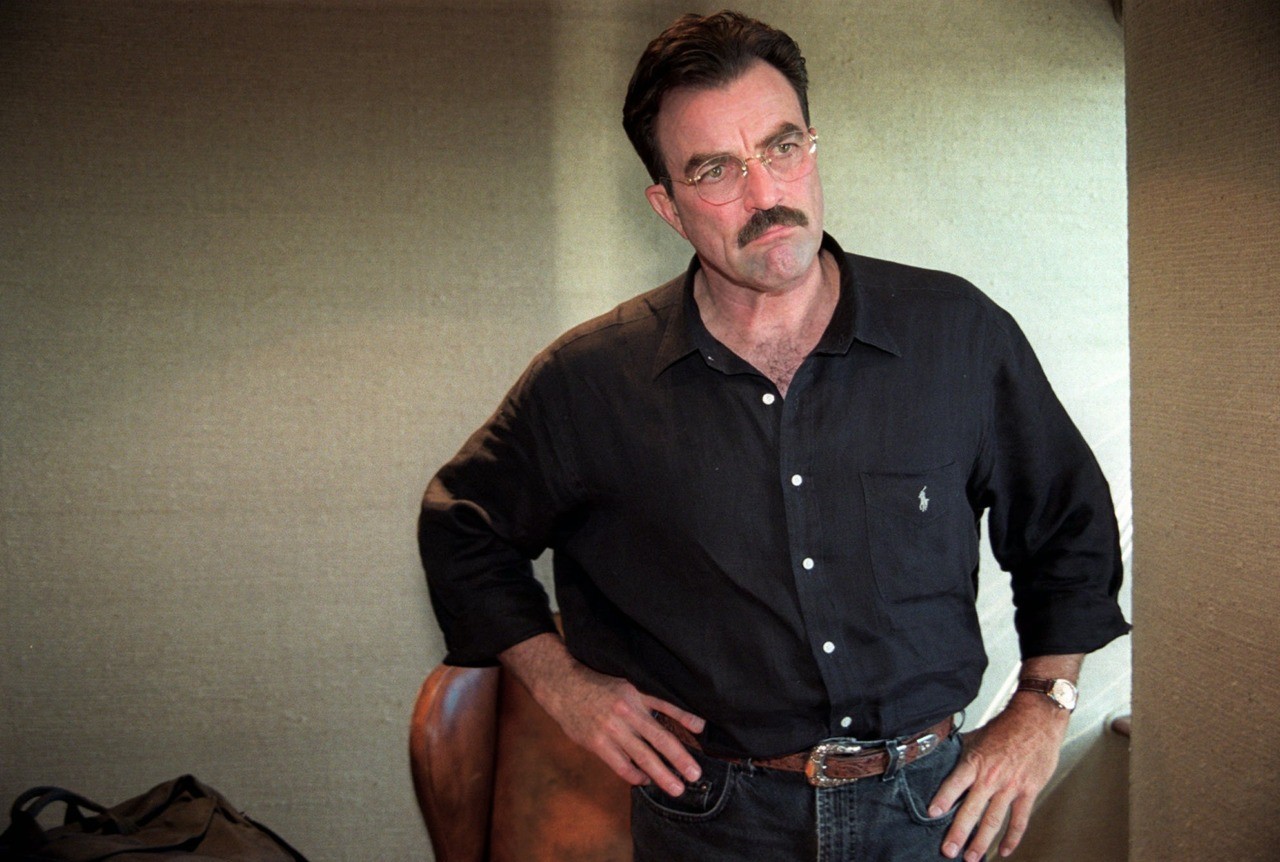 Actor Tom Selleck reacts to questions about how the paparazzi have affected his life and the lives of other actors, during an interview in his Burbank, Calif., office Thursday, Sept. 4, 1997. In the wake of Princess Diana’s accident, Selleck is part of a growing number of celebrities calling for everything from tabloid boycotts to congressional hearings to new privacy laws. (AP Photo/Rene Macura)

“I am a veteran, I’m proud of it … I was a sergeant in the U.S. Army infantry, National Guard, Vietnam era. We’re all brothers and sisters in that sense,” he said, according to Military.com.

The Lion King  and Star Wars voice actor, who has been referred to as “one of the greatest actors in American history” served in the Army during the Korean War and “rose to the rank of first lieutenant.” 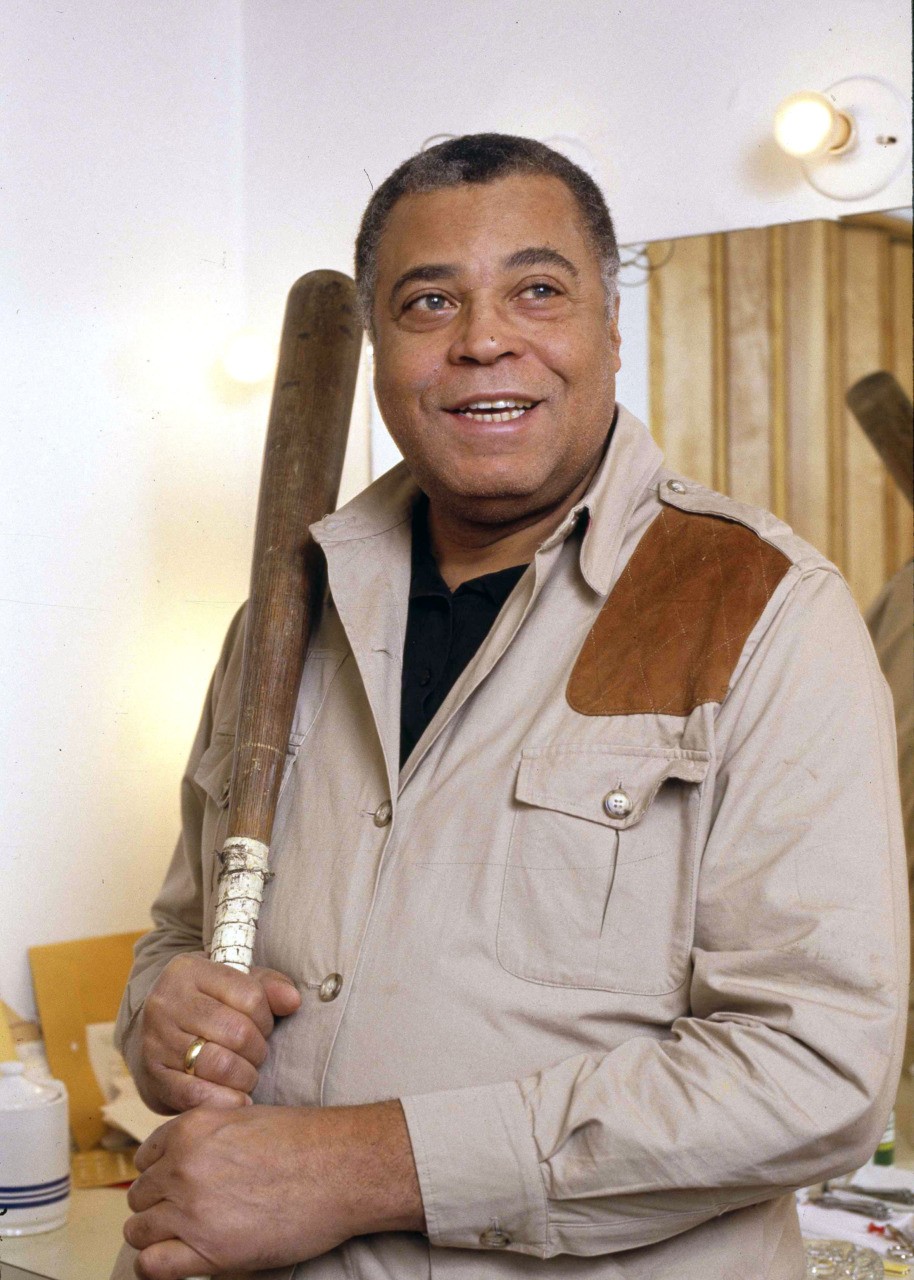 Actor James Earl Jones, with bat in hand, smiles in his dressing room in Los Angeles, where he is rehearsing for the play “Fences,” March 1987. (AP Photo/Nick Ut)

Legendary “I Left My Heart in San Francisco” singer Tony Bennett was drafted during World War II and assigned to the 63rd Infantry Division, or “Blood and Fire” division,  in France and Germany. 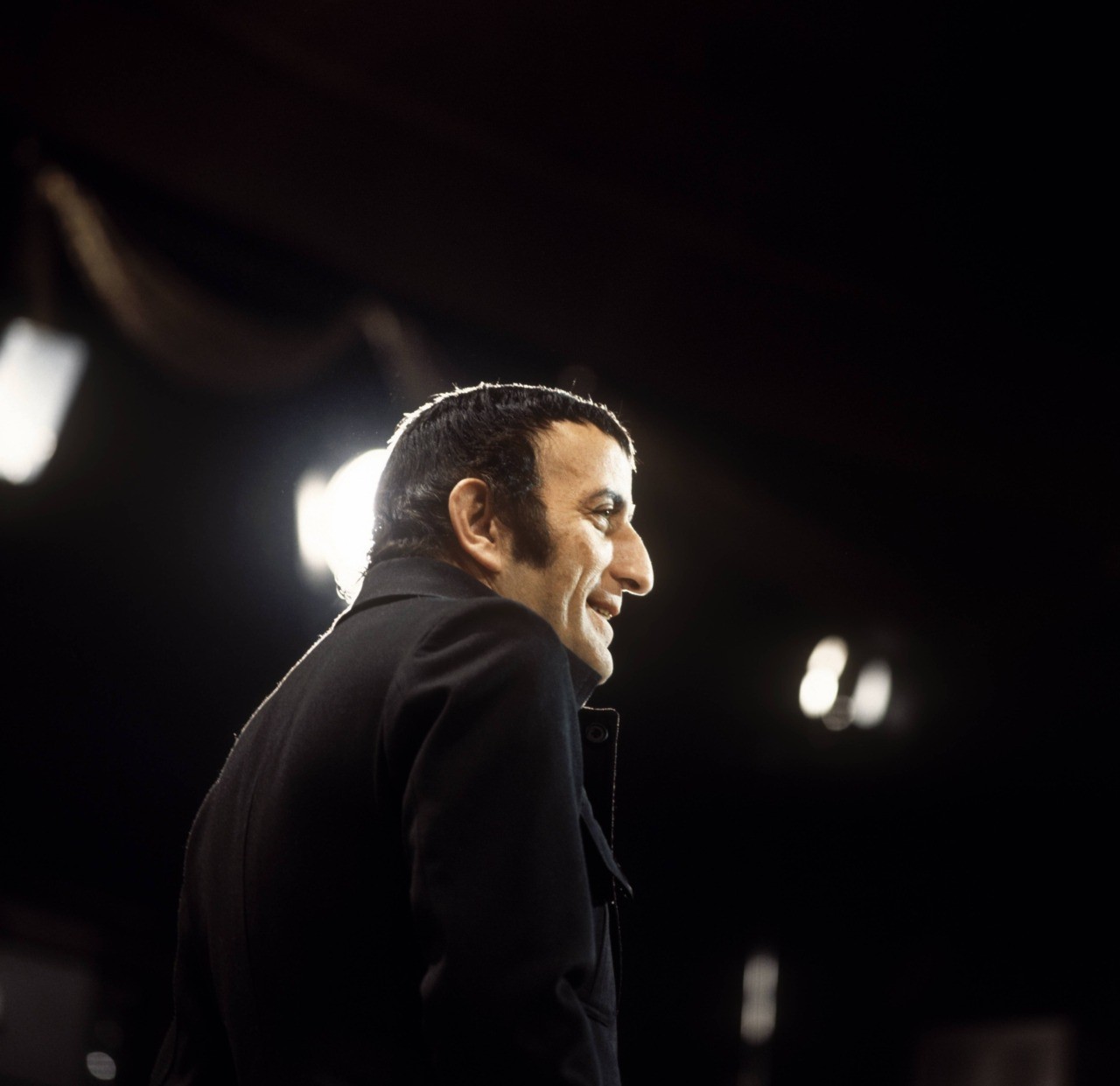 The actor and comedian, most well-known for his work on The Daily Show, joined the Marines in 1990 and had a military career spanning 23 years. 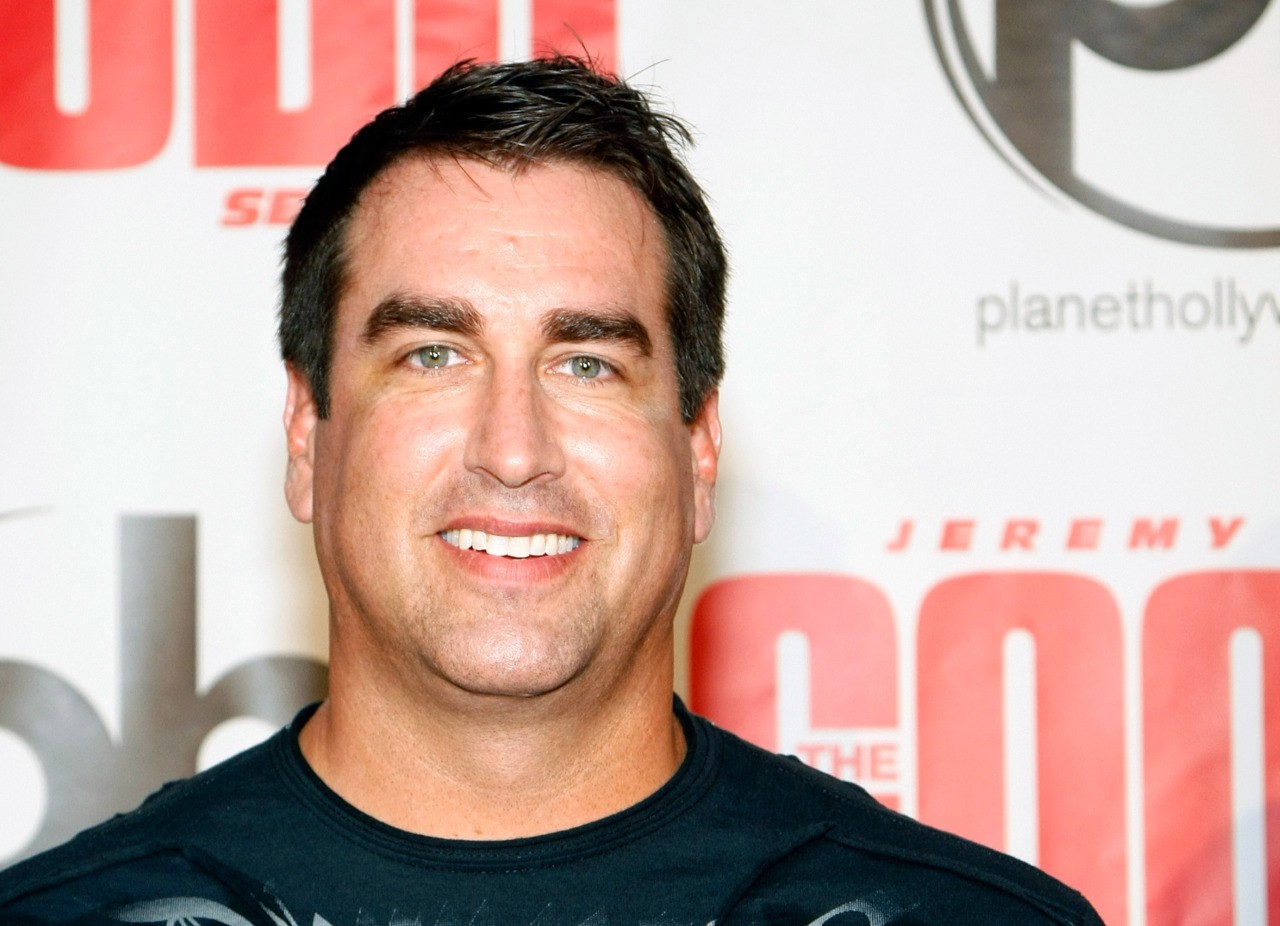 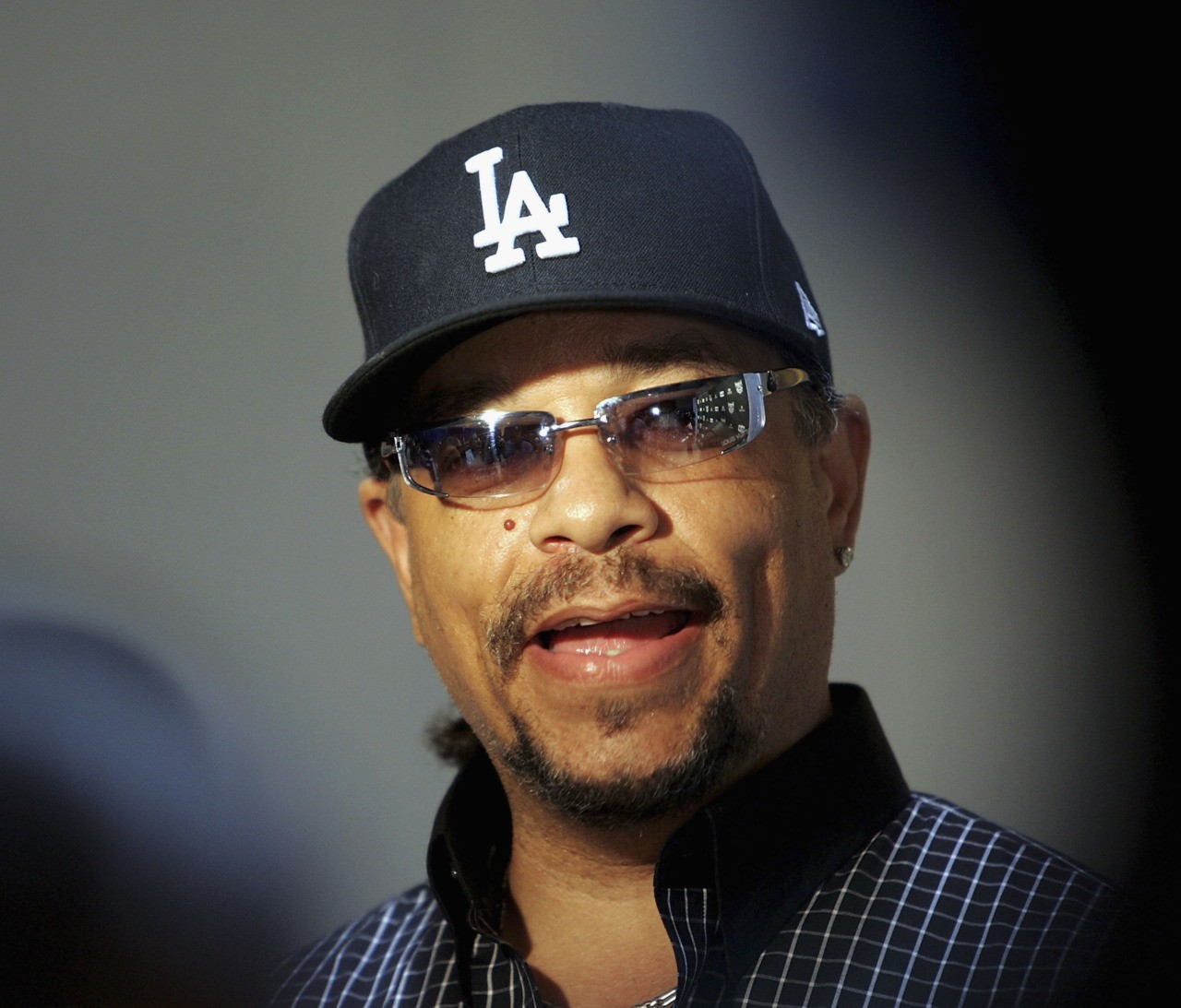 The actor, who won an Academy Award for Best Actor in The French Connection, enlisted in the Marine Corps in 1946, lying about his age, as he was only 16. 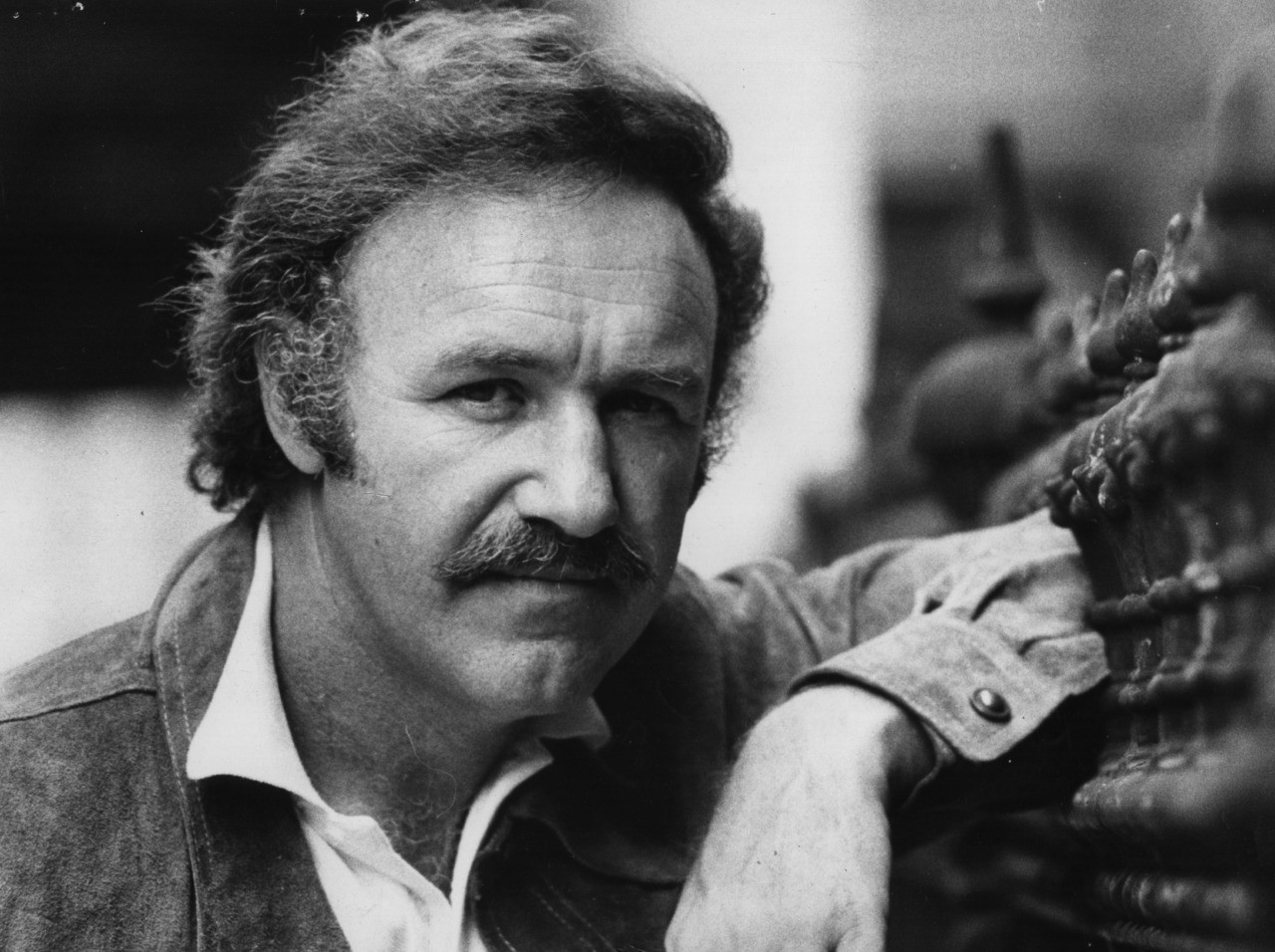 He worked as a field radio operator and was stationed in China, as well as Hawaii and Japan.

Poitier, the first black American to win an Academy Award, enlisted during World War II in November 1943, despite being too young, claiming to be 18 when he was only 16 years old. 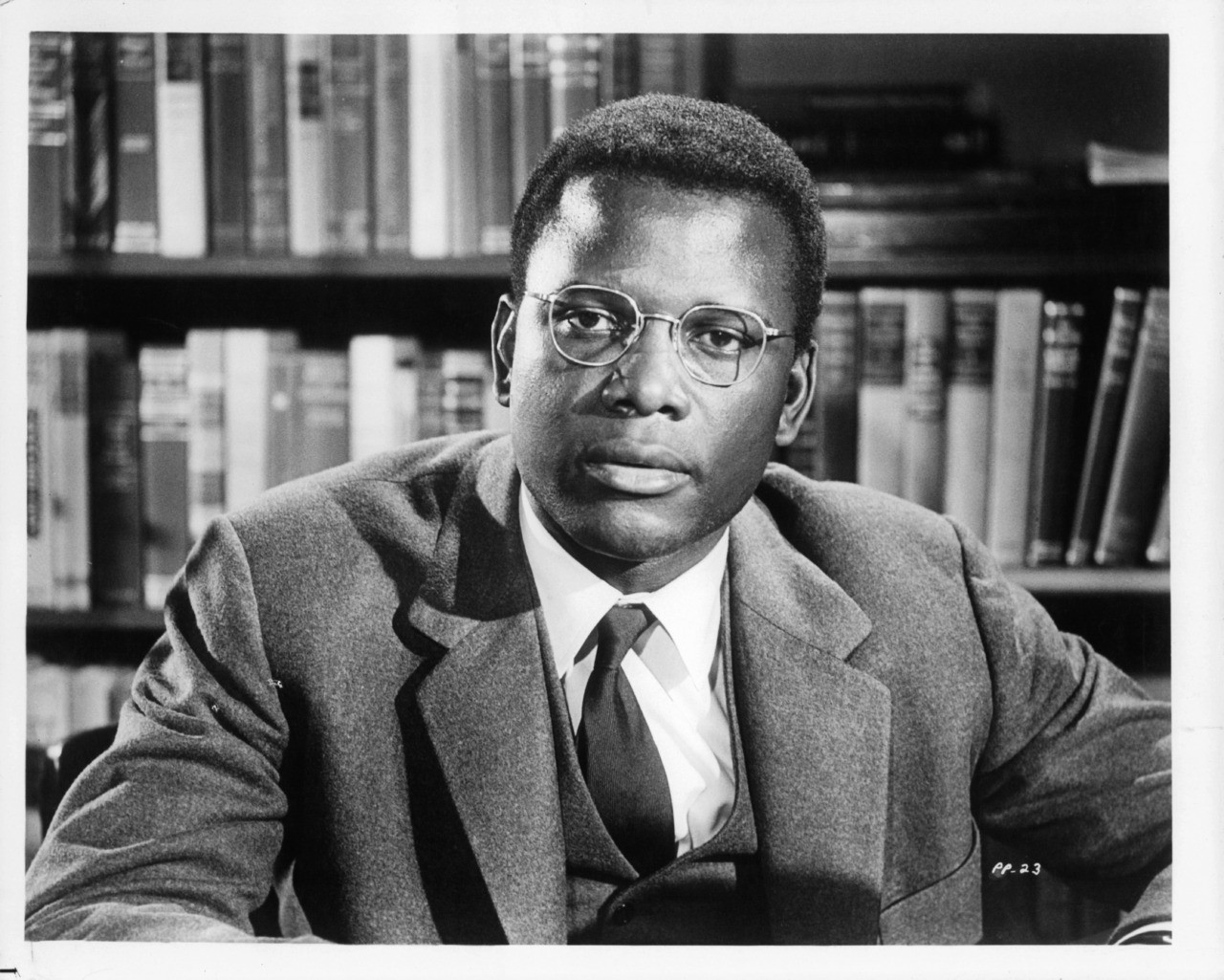 Sidney Poitier at desk in a scene from the film ‘Pressure Point’, 1962. (United Artists/Getty Images)

He “went on to serve the Army as a physiotherapist for almost a year.”

The Godfather actor enlisted in the U.S. Army after graduating from Principia College in 1953, where he ultimately found his passion for acting, performing in plays while stationed in Camp Gordon. 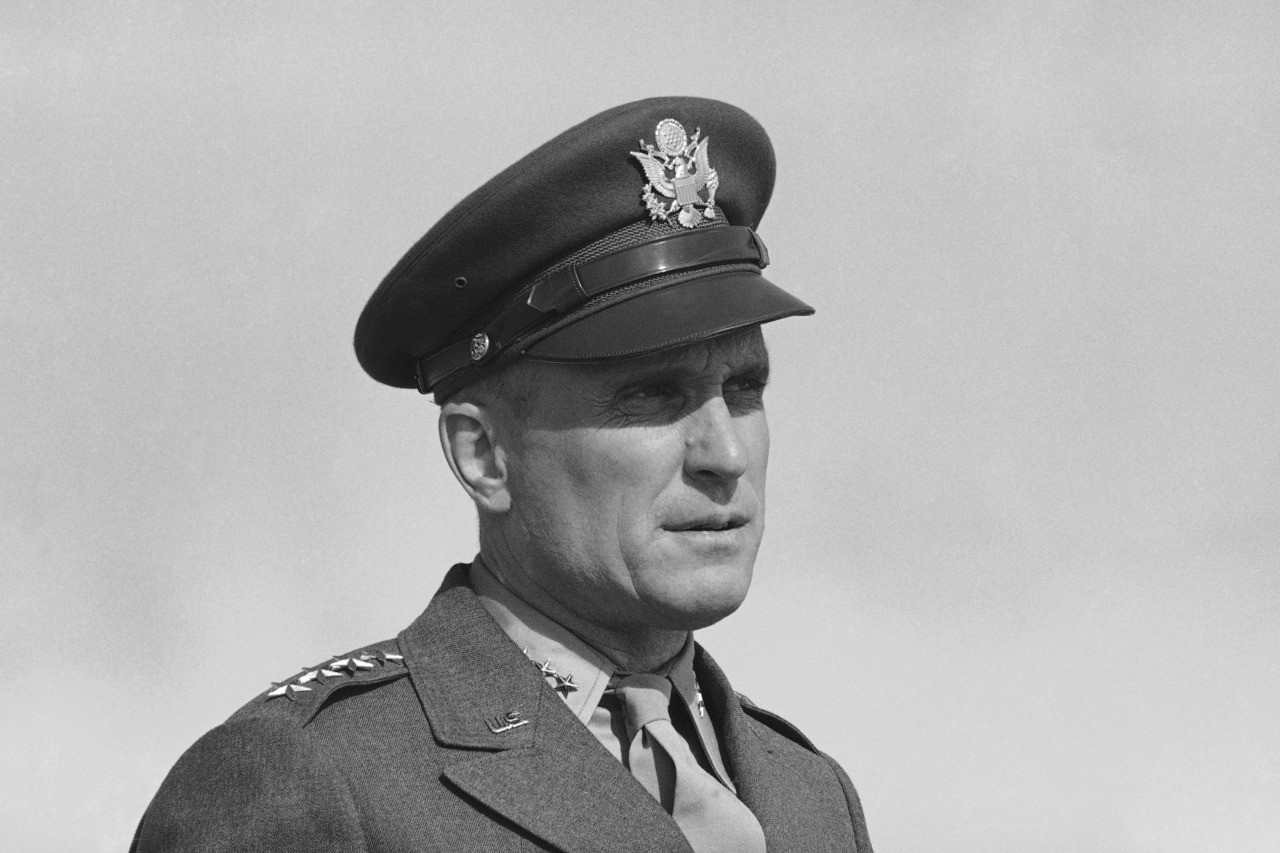 Robert Duvall portrays the title character in “Ike,” a made-for-TV miniseries which will feature a reenactment of the Allied landing at Omaha Beach, and also starring Richard Herd as Gen. Omar Bradley and Paul Gleason as Tex, April 15, 1978. (AP Photo/Doug Pizac)

He served two years, leaving as a private first class but had to clarify the details of his service.

“Some stories have me shooting it out with the Commies from a foxhole over in Frozen Chosen. Pork Chop Hill stuff. Hell, I barely qualified with the M-1 rifle in basic training,” Duvall clarified in an interview in 1984.

The filmmaker behind the films Platoon and Born on the Fourth of July is a combat veteran, serving in the U.S. Army from  1967 and 1968. 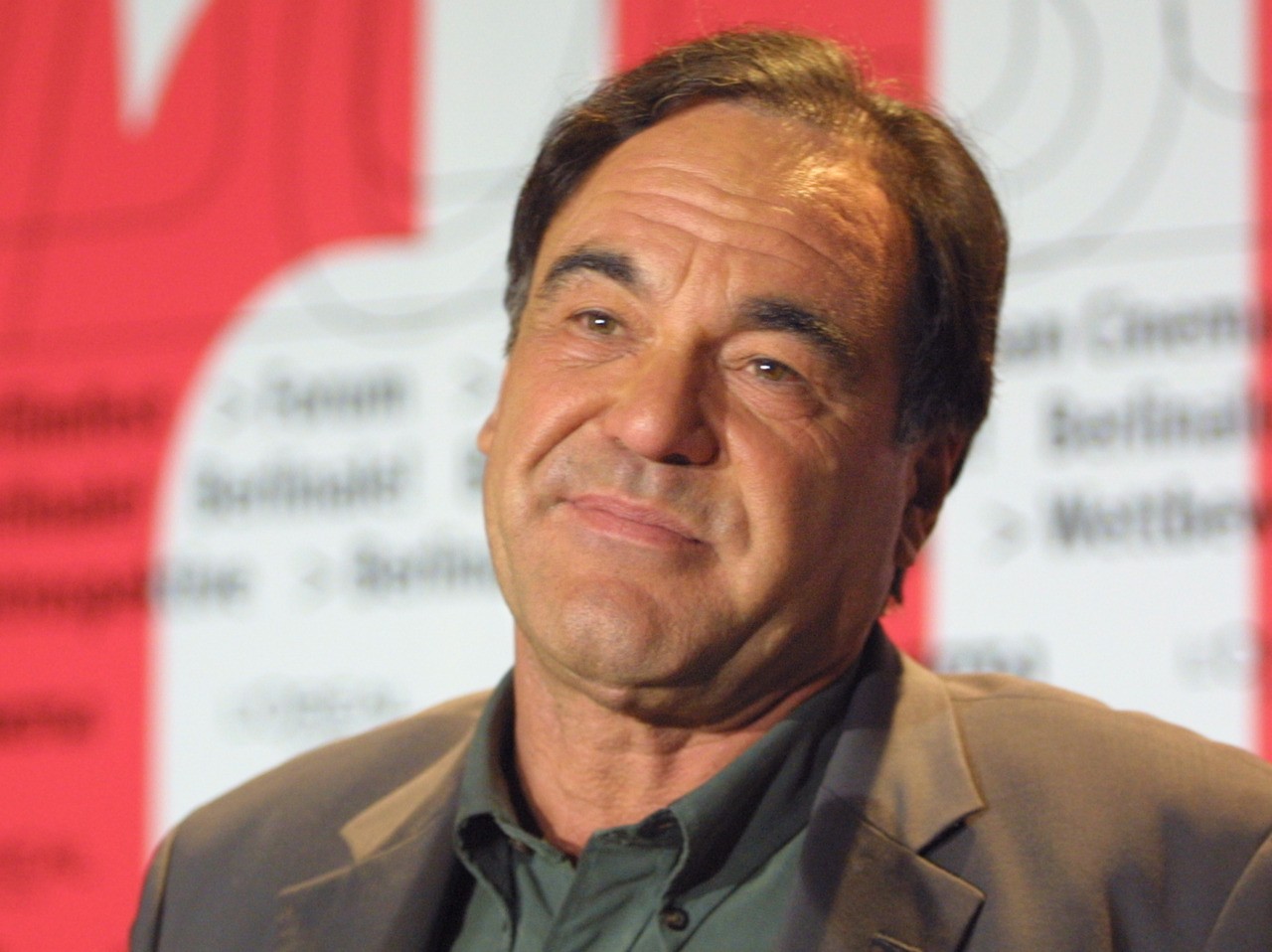 Director Oliver Stone speaks at a media conference at the Berlinale Film Festival February 14, 2003 in Berlin. Stone is at the Berlinale for the premiere of his documentary film, “Comandante” which is about Cuban leader Fidel Castro. (Sean Gallup/Getty Images)

He was wounded twice and is the recipient of two awards: “The Bronze Star with ‘V’ device, which he received after conducting ‘extraordinary acts of courage under fire,’ and a Purple Heart with one Oak Leaf Cluster,” according to Military.com.

The 102-year-old actor, producer, and director served in the Navy from 1942 to 1944 during World War II, serving as a “gunnery and communications officer in anti-submarine warfare on board PC-1139.”

Driver, widely known for his role in the Star Wars sequel trilogy films, enlisted in the U.S. Marine Corps after 9/11. 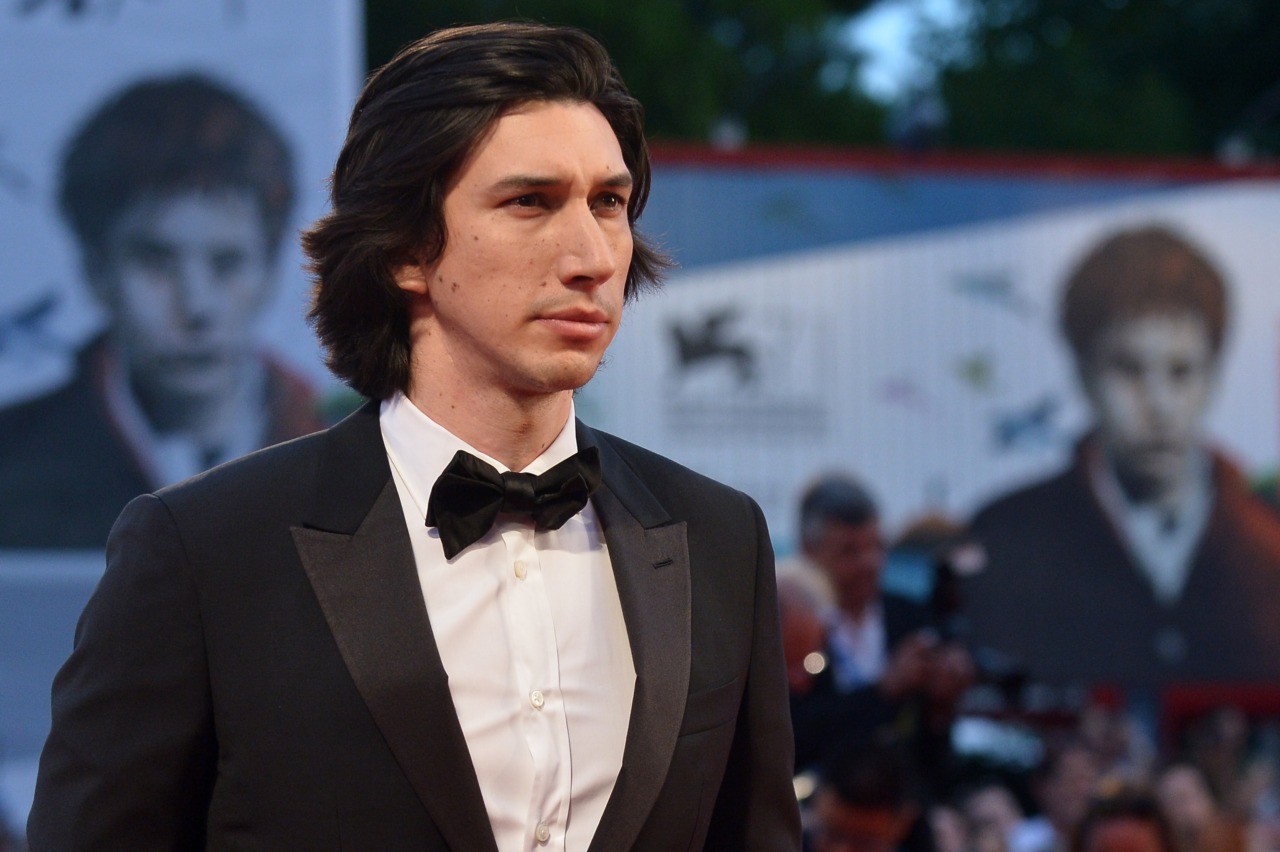 US actor Adam Driver arrives for the screening of the movie “Hungry Hearts” presented in competition at the 71st Venice Film Festival on August 31, 2014 at Venice Lido. AFP PHOTO / TIZIANA FABI (TIZIANA FABI/AFP via Getty Images)

However, he was never deployed due to a mountain biking accident and was ultimately medically discharged.

“There’s something about going into the military and having all of your identity and possessions stripped away: that whole clarity of purpose thing,” Driver told The Guardian in a 2017 interview. It becomes very clear to you, when you get your freedom back, that there’s stuff you want to do.”