Ice Cube’s tweet with the image has been retweeted more than 24,000 times, despite the fact that it’s in violation of the same misinformation guidelines that the Silicon Valley company is currently using to punish conservatives on the platform.

“A wolf in Wolves clothing. The demons are among us. #Fightthecowards,” Ice Cube said in the tweet.

A wolf in wolves clothing. The demons are among us. #Fightthecowards pic.twitter.com/UYw7zXNabQ

Video of Chauvin kneeling on George Floyd’s neck has spurred a federal investigation and a national outcry.

In a followup tweet that included the side by side photo of Chauvin and Riches, Ice Cube said “The F.B.I. knows exactly who the racist are in each police department and still let them keep there jobs until something like this happens. Stop sitting on critical information. Weed them out and get them out…NOW! #jonnycomelatelyagain.” That tweet has been retweeted more 5,500 times.

The F.B.I. knows exactly who the racist are in each police department and still let them keep there jobs until something like this happens. Stop sitting on critical information. Weed them out and get them out…NOW! #jonnycomelatelyagain https://t.co/X7ny0wsRQX

The image below is a screenshot and shows actress Rosanna Arquette retweeting Ice Cube’s tweet to her 100,000-plus followers. 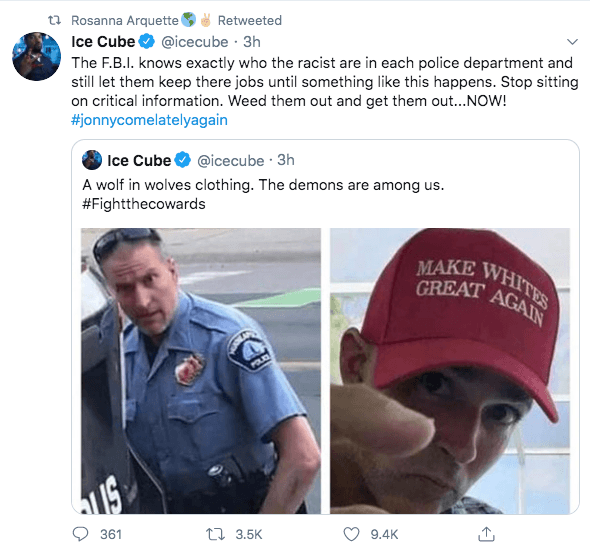 Saw and The Princess Bride actor Cary Elwes shared a screenshot of radio host Talbert Swan’s tweet that included the photo of Chauvin and Richesout. Elwes later deleted the tweet.

Ice Cube’s tweet with the misleading photo violates Twitter’s misinformation rules. But, as of this writing, his tweet has been left unchecked. This, just a day after Twitter dinged two tweets from President Donald Trump with a “Fact Check” warning. The president’s tweets were critical of mail-in ballots and merely raised awareness about the risk of voter fraud — which has been widely documented — should vote by mail be implemented nationwide.

A slew of other celebrities with verified Twitter accounts have also shared the false image.

Update: Twitter notified us at 8:53 pm EST — 12 hours after Ice Cube posted his original viral tweet, which accumulated 40,000 retweets in that timespan — that a “manipulated media” warning had been added to “hundreds” of tweets containing the doctored photo. At least two other tweets from verified users [1, 2] are still circulating, as of this update, without the warning label.