Swedish teenage climate alarmist Greta Thunberg is one of four winners of the 2019 Right Livelihood Award, known as the Scandinavian country’s so-called alternative to the Nobel Prize.

“I’m deeply grateful for being one of the recipients of this great honor,” Thunberg told the Guardian UK. “But of course, it is not me who is the winner. I am part of a global movement of school children, youth and adults of all ages who have decided to act in defence of our living planet. I share this award with them.”

Recipients of this year’s award include women’s rights attorney Guo Jianmei, human rights activist Aminatou Haidar, and indigenous leader Davi Kopenawa. The award comes with a cash prize of around $100,000.

“With the 2019 Right Livelihood Award, we honour four practical visionaries whose leadership has empowered millions of people to defend their inalienable rights and to strive for a liveable future for all on planet Earth,” Right Livelihood Foundation said in a statement.

The development comes after Thunberg chastized world leaders this week at the United Nations General Assembly for what she described as their inaction against purported climate change.

“This is all wrong. I shouldn’t be up here. I should be back in school on the other side of the ocean. Yet you all come to us young people for hope. How dare you!,” Thunberg said in her accusatory speech. 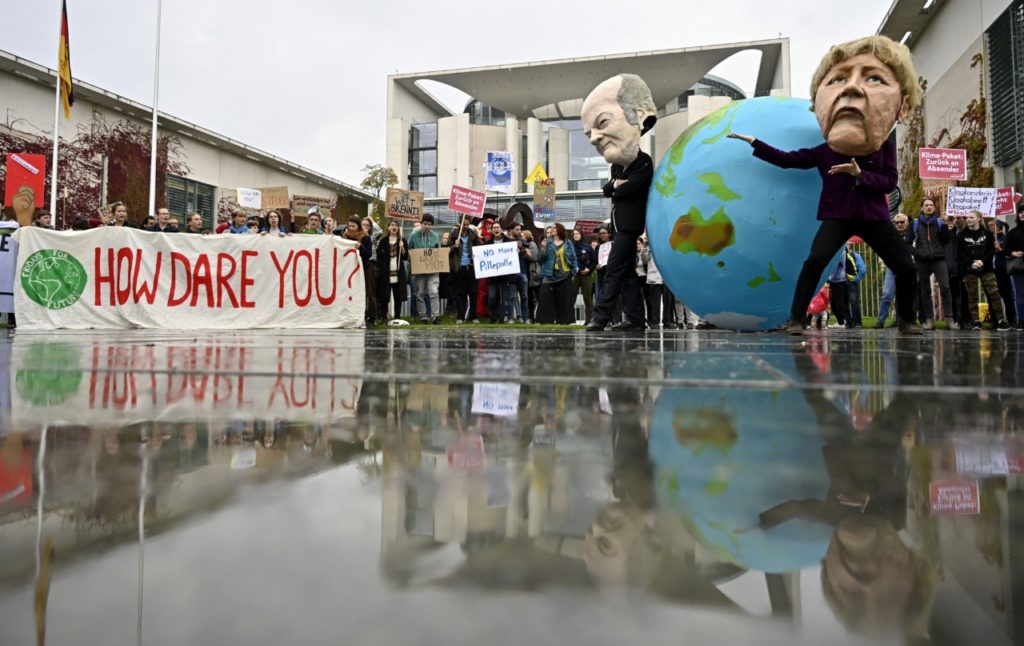 Environmentalists hold a banner reading “How dare you”, quoting Swedish teenage climate activist Greta Thunberg, and wear masks of German Chancellor Angela Merkel and Finance Minister and Vice-Chancellor Olaf Scholz as they protest outside the German Chancellery where is taking place the weekly cabinet meeting in Berlin on September 25, 2019. (TOBIAS SCHWARZ/AFP/Getty)

“You have stolen my dreams and my childhood with your empty words. And yet I’m one of the lucky ones. People are suffering. People are dying. Entire ecosystems are collapsing. We are in the beginning of a mass extinction, and all you can talk about is money and fairy tales of eternal economic growth. How dare you!” she added.

Thunberg and 15 other children filed a complaint with the United Nations on Monday, accusing five countries of inaction on combatting so-called global warming.

“Change needs to happen now if we are to avoid the worst consequences. The climate crisis is not just the weather. It means also, lack of food and lack of water, places that are unlivable and refugees because of it. It is scary,” Thunberg said in a statement upon announcing the complaint.

The complaint does not name China, which accounts for 30 percent of global emissions, as it has not signed the part of the Convention on the Rights of the Child treaty allowing children to seek justice for breaching the agreement.

The complaint drew awe from French President Emmanuel Macron, one of the world’s most ardent supporters of the Paris climate agreement, who accused Thunberg of holding a “very radical” towards France and warned it would likely “antagonize societies.”

Brune Poirson, France’s Ecological Transition Minister, agreed with Macron, telling French radio station France Inter: “I am not sure that you mobilize people with despair, with what is almost hatred, setting people against each other.”