United Nations negotiators expressed disbelief then anger Sunday as the COP25 climate talks in Madrid, Spain, looked set to end with no agreement on anything of substance.

The only unanimous decision reached by the 25,000 delegates was the backing for another identical conference in 12 months time to revisit the agenda in a program that first started in 1991.

Negotiators from the Alliance of Small Island States (AOSIS) pointed the finger of blame at Australia and the United States as well as Brazil and Japan for resisting the call for financial reparations to be sent to “victims” of climate change as well as other major industrial nations which see no reason to support U.N. global climate tax demands.

The U.S. in particular was blamed for refusing to agree to developing countries’ demands for money under what is known in U.N. jargon as the Warsaw International Mechanism (WIM). It did point out no country in the world gives more to humanitarian causes than it does. A US state department official said:

The U.S. government is the largest humanitarian donor in the world. The WIM should be a constructive space to catalyse action on the wide range of loss and damage issues. A divisive conversation on blame and liability helps no one.

The annual climate marathon had been due to conclude on Friday, but has dragged on with ministers mired in multiple disputes over implementing the 2015 Paris deal. 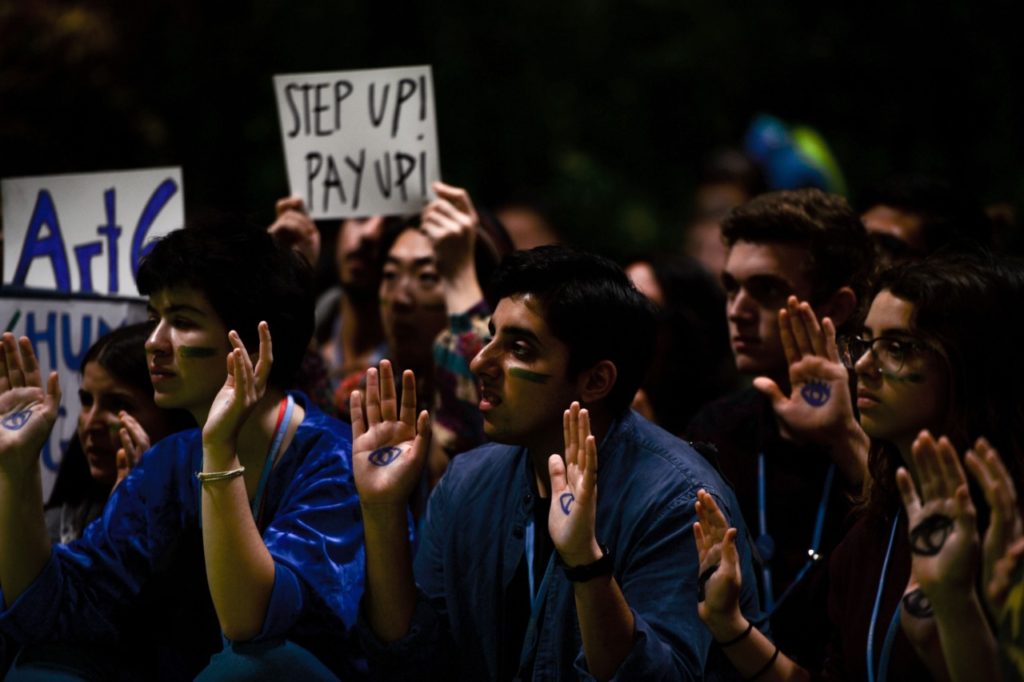 Demonstrators take part in a protest on climate emergency, called by environmental groups including Extinction Rebellion and Fridays For Future, during the UN Climate Change Conference COP25 at the ‘IFEMA – Feria de Madrid’ exhibition centre, in Madrid ( CRISTINA QUICLER/AFP via Getty Images)

Guterres urged major emitters to send a clear signal they are ready to increase their ambition next year and “hopefully” commit to net zero carbon emissions by 2050 — seen as vital to keeping global temperatures within manageable levels.

“History cannot accept that my generation will betray our children and grandchildren,” said Guterres, a former Portuguese prime minister, who has made climate a signature issue since taking over as U.N. secretary-general in early 2017.

The next U.N. climate summit is set down for December, 2020 in Glasgow, Scotland.