Any failure by the Cop26 summit in Glasgow to deliver an agreement on future trans-national climate controls could plunge the world into chaos, sparking migration crises alongside food shortages, political disorder and war,  the U.N.’s top climate official warned Sunday.

Patricia Espinosa, executive secretary of the U.N. Framework Convention on Climate Change, made her bleak prediction ahead of the opening of the convention on November 1.

As some 30,000 people from 197 different countries ready to fly in to the meeting, she warned:

The catastrophic scenario would indicate that we would have massive flows of displaced people.

The Mexican politician and diplomat then drew a broader, bleaker picture for the planet if attendees fail to heed U.N. warnings. She said the impact would cascade, adding: “It would mean less food, so probably a crisis in food security. It would leave a lot more people vulnerable to terrible situations, terrorist groups and violent groups. It would mean a lot of sources of instability.”

Espinosa told the Observer newspaper in an interview: “It doesn’t only speak to the environmental side. It is also about the whole system we have built. We know what migration crises have provoked in the past. If we were to see that in even higher numbers – not only international migration, but also internal migration – [it would] provoke very serious problems.” 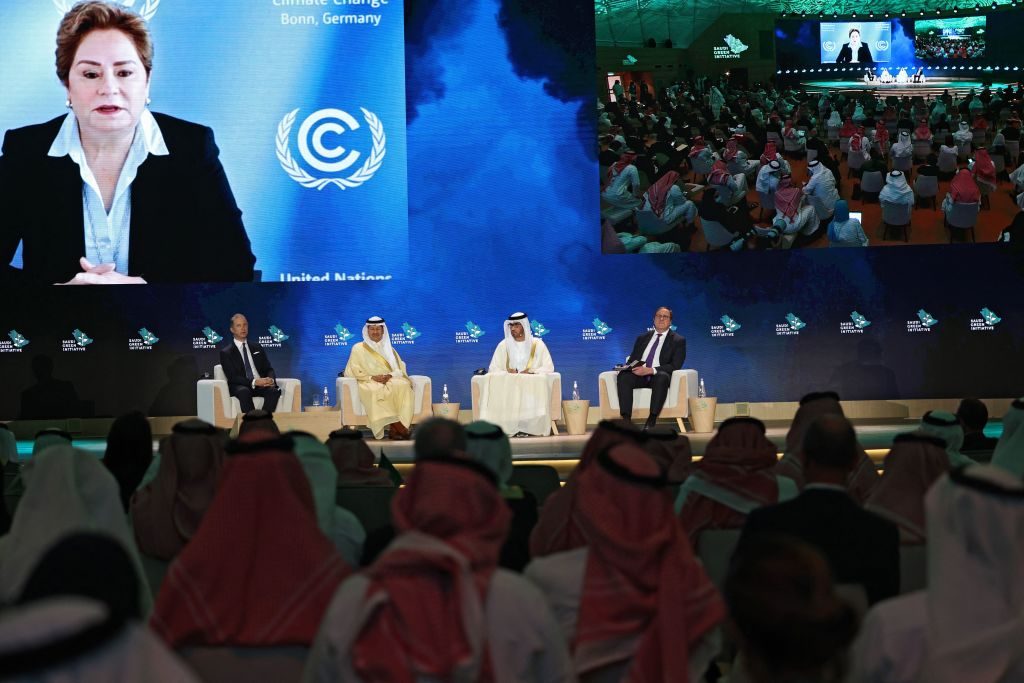 Patricia Espinosa, executive secretary of the United Nations Framework Convention on Climate Change, delivers a televised speech during the opening ceremony of the Saudi Green Initiative forum on October 23, 2021, in the Saudi capital Riyadh. (FAYEZ NURELDINE/AFP via Getty Images)

The leaders of the G20 nations of the world’s largest developed and developing economies will fly into Rome next weekend for two days of preliminary talks, then fly again to Glasgow, to join about 100 other heads of government for the climate gathering.

Some key leaders – including Xi Jinping, president of China, now the world’s biggest emitter of carbon dioxide, and Russia’s Vladimir Putin – are unlikely to attend.

Espinosa noted these absences but confidently predicted that would not prevent a successful outcome, adding: “Not all countries are going to be represented at head of state level. I don’t have any information about President Xi’s presence but I continue to engage with the Chinese delegation, and there is very important engagement by China in the process.”

Attendees are however guaranteed to hear a lecture from climate activist Greta Thunberg.

A long list of quarantine exemptions have been put in place to ensure all those flying in will not be required to undertake lengthy isolation on arrival.

“The U.K. and Scottish governments have put in place special arrangements for COP26 recognizing this is a unique event, that must be fully inclusive to achieve the climate outcomes urgently needed,” according to the revised rules.

Espinosa, a former minister in the Mexican government took on the U.N. climate role in 2016. She shares primary responsibility for the talks with Alok Sharma, the UK cabinet minister who will act as president.