One person has died and three more were injured in a suspected Islamist knife attack at a station near the German city of Munich. The attacker reportedly shouted “allahu akbar” as he carried out the stabbing.

The attacker, believed to be a 27-year-old German citizen, was apprehended at the scene.

At the press conference, police said they had searched the attacker’s home and found no propaganda of any sort, but are still looking at his phone and laptop.

The perpetrator, who has still not officially been named, gave “confused” statements while under interrogation. He told them he removed his shoes because he felt “very warm” and could “feel bugs”.

Police still do not know why he travelled to Grafing station.

On Wednesday there will be a memorial service at the station where the attacks happened.

At a press conference, police confirmed witness reports that that attacker shouted “allahu akbar” as he stabbed his victims, and also said that unbelievers would die.

However, they have found no evidence that he was part of an Islamist cell, and say that he was unknown to Bavarian authorities before today’s attack.

Local authorities are holding a press conference on the attack. In the mean time, the attacker’s apartment in the district of Greunberg is being searched.

DPA says that he had been undergoing psychiatric treatment at a local clinic.

Statement from the mayor:

Bavarian Interior Minister Joachim Herrmann said investigations have found the man to be mentally ill. Political motivation for attack still not ruled out, though.

“Something like this is completely new and has shaken people deeply – it is something you only see on television.

“That it has happened here is completely incomprehensible.”

A spokesman for the Munich Public Prosecutor told Merkur.de that they are dealing with the alleged attacker, and confirmed that he was from Hesse. He refused to confirm whether drugs had been found at the scene but nor did he deny it.

He also said there may be a political motive for the attacks.

Police Find Evidence Of Drug Use:

Sueddeutsche Zeitung reports that police have found traces of drugs in a container secured at the scene.

The BBC states: “Some witnesses said he shouted “Allahu akbar” (“God is great” in Arabic) but the motive for the attack is unclear.”

The Independent is reporting that the state prosecutor has claimed that attacker had an “Islamist background”, but did not go into further details.

Update: The Victim Who Has Died Is 56:

Police issue a correction to say the deceased victim is 56, not 50 as previously reported.

Attacker ‘Had Drug and Mental Problems’:

“Security sources: Alleged Grafing attacker said to have drug problems and have been in psychiatric treatment.”

Der Spiegel is reporting that he is from Hesse.

No increase in Munich security:

A police spokesman has told Merkur.de that it is “too early” to decide whether to increase security in the city.

Image shows the attacker’s bloody footprints leading from the train: 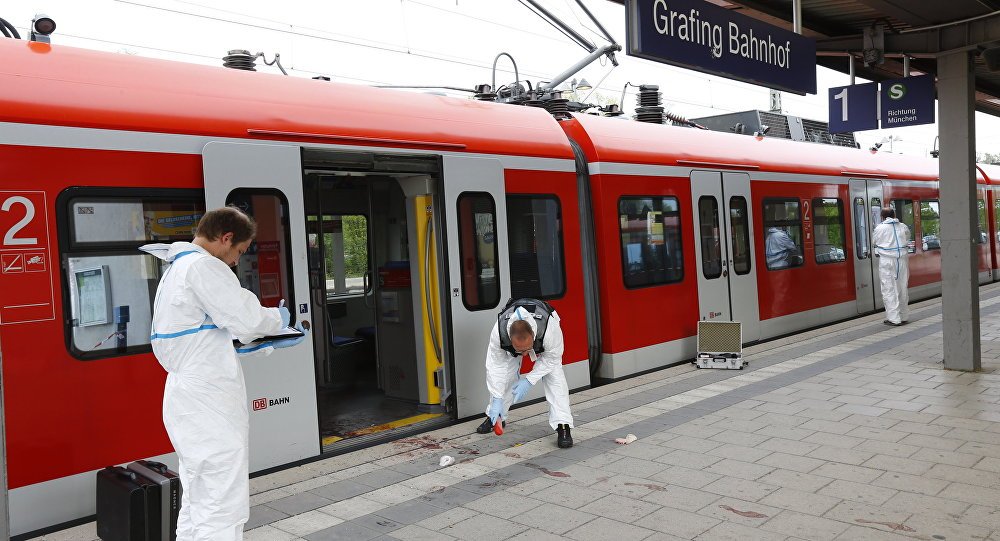 Witnesses report the attacker was barefoot. Bloody footprints have been spotted on the ground.

Latest Scenes from the investigation:

Bavarian Interior Minister Joachim Herrmann: “A second person remains in a life threatening condition. At the moment, all we know is the attacker is a German citizen.”

Details of the victims:

Merkur.de is reporting that the offender is 27 and “of German origin”. Police have confirmed the act was “politically motivated.

As well as “allahu akbar”, he also reportedly shouted “You infidels!”.

MUNICH, May 10 (Reuters) – A man knifed passengers at a train station in the Munich area early on Tuesday, killing one man and injuring three, media reported, and police said they were investigating whether there was an Islamist motive to the attack.

A spokeswoman said police were checking witness statements that the man shouted “Allahu Akbar” (‘God is Greatest’ in Arabic) during the attack, adding that the perpetrator had been arrested.

Germany’s ARD broadcaster reported that one man had died from his injuries. Police could not confirm this.

The attack took place in the S-Bahn commuter train station at Grafing, a town about 32 km (20 miles) southeast of the Bavarian capital in southern Germany.

Germany, which is playing a supporting role in the fight against Islamic State, has not suffered a major attack by Islamist militants on the scale of those that have hit neighbouring France and Belgium.

However, German security services are on alert and ministers have repeatedly warned of a possible attack.

Over 800 home-grown radicals have left Germany to join jihadist groups in Syria and Iraq and about 260 have returned.

Germany has also been a transit country for militants who carried out attacks in Belgium this year and Paris last year. There are concerns that some of the 1 million migrants who arrived in the country last year have slipped off officials’ radar.