ROME — Pope Francis tweeted out thanks for newly canonized Catholic saints Sunday, but mistakenly used the hashtag of the New Orleans Saints football team, bringing down an avalanche of jocular commentary.

“Today we give thanks to the Lord for our new #Saints. They walked by faith and now we invoke their intercession,” the papal tweet ran. 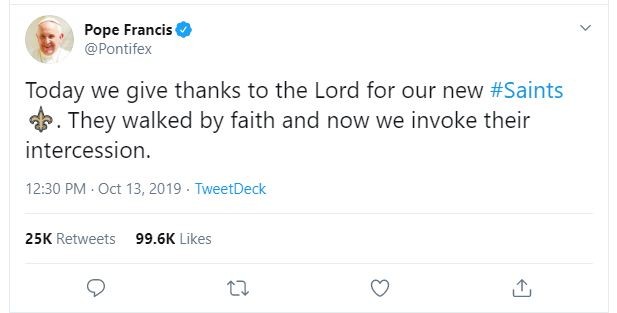 The mistake was easy enough to make. The Vatican staff who handle the pope’s official Twitter account in English obviously typed in the hashtag #Saints and the first option to appear is the hashtag for the football team, complete with the fleur-de-lis icon.

Francis has been an avid user of social media, setting up Twitter accounts in different languages from early in his pontificate. A 2015 study proclaimed the pope to be the most influential person on Twitter for the third year in a row.

But despite his own success on social media, Francis remains skeptical of its real influence and has warned young people about the virtual reality of social media.

“In the social media, we see faces of young people appearing in any number of pictures recounting more or less real events, but we don’t know how much of all this is really ‘history,’ an experience that can be communicated and endowed with purpose and meaning,” Francis said in a 2017 message to youth.