The general secretary of the United States Conference of Catholic Bishops (USCCB) resigned Tuesday in the wake of allegations he engaged in continued sexual misconduct with adults through the use of a location-based hookup app.

An investigation by Catholic media project The Pillar led to allegations that Monsignor Jeffrey Burrill had “visited gay bars and private residences while using a location-based hookup app in numerous cities from 2018 to 2020, even while traveling on assignment for the U.S. bishops’ conference.”

According to the report, Burrill used the hookup app Grindr almost daily during periods in 2018, 2019, and 2020 while he held his oversight role that served to coordinate the Church’s response to sexual abuse and misconduct scandals.

Archbishop José Gomez, president of the USCCB, reportedly said in a memo to the bishops:

It is with sadness that I inform you that Msgr. Jeffrey Burrill has resigned as General Secretary of the Conference.

On Monday, we became aware of impending media reports alleging possible improper behavior by Msgr. Burrill. What was shared with us did not include allegations of misconduct with minors. However, in order to avoid becoming a distraction to the operations and ongoing work of the Conference, Monsignor has resigned effective immediately.

As The Pillar reported, Burrill, a priest of the Diocese of La Crosse, Wisconsin, was “effectively the highest-ranking American cleric who is not a bishop.” 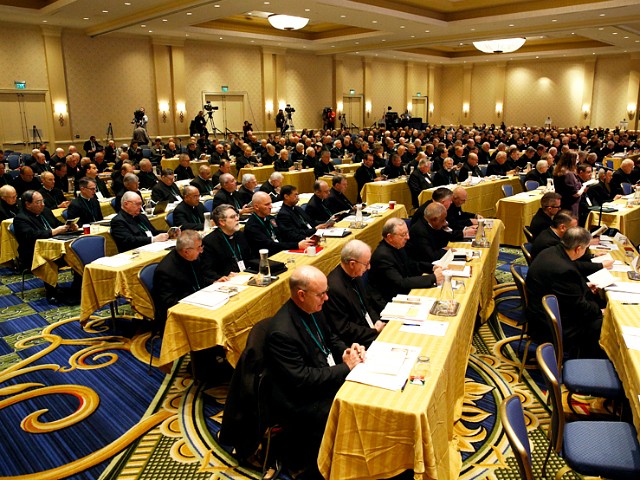 Burrill and other senior U.S. bishops’ conference officials met with Pope Francis in October 2018 to discuss the conference’s response to the sexual abuse scandals and the cover-ups by some bishops.

Data app signals suggest he was at the same time engaged in serial and illicit sexual activity.

In June 2018, for example, the report noted that on the same day it was revealed former Cardinal Theodore McCarrick had engaged in sexual impropriety and abuse that continued for decades, Burrill’s mobile device “emitted hookup app signals at the USCCB staff residence, and from a street in a residential Washington neighborhood. He traveled to Las Vegas shortly thereafter, data records show.”

The media project stated it offered to discuss its findings “off-the-record” with the bishops’ conference leadership prior to publication of its findings. According to the report, the USCCB canceled a scheduled meeting with The Pillar, which agreed to delay the publication of its investigation while officials formulated a response to the findings. The bishops’ conference officials then reportedly requested written questions from The Pillar and subsequently sent their responses along with a request for a meeting.

Controversial Jesuit Rev. James Martin, editor-at-large of America Magazine, tweeted the account of The Pillar’s investigation along with the comment:

Catholic journalism, 2021: Spying on a priest (more accurately, using data from an unnamed source who spied on him) for breaking his promise of celibacy, then conflating homosexuality with pedophilia, under the guise of a journalistic “investigation…”

Catholic journalism, 2021: Spying on a priest (more accurately, using data from an unnamed source who spied on him) for breaking his promise of celibacy, then conflating homosexuality with pedophilia, under the guise of a journalistic "investigation…" https://t.co/oD54Z8X1uK

As Breitbart News reported in June, Pope Francis praised Martin, in a handwritten letter that Martin posted to Twitter, for his LGBT ministry that the pope said he conducts with “compassion” and “tenderness”:

Pope Francis @Pontifex has sent a beautiful letter on the occasion of the Outreach LGBTQ Catholic Ministry Webinar, which happened yesterday, expressing his support for this ministry and encouraging us to imitate God's "style" of "closeness, compassion and tenderness"… pic.twitter.com/O9nTftoLDi

“In his letter, the pope was responding to a letter Father Martin had sent him prior to the Outreach 2021 LGBT Catholic ministry conference, which took place by webinar on Saturday, June 26,” Breitbart News observed.

In 2018, in the wake of the release of a letter by Archbishop Carlo Maria Viganò, the Vatican’s former ambassador to the United States, which linked both the Catholic Church’s sexual abuse crisis, as well as ensuing coverups by some bishops, to an extensive “homosexual network” within the Church, Martin called the tumult that followed a “witch hunt for gay priests,” even as he admitted:

It is important to say that the majority (but not all) of the clerical abuse crimes were cases of priests preying on male adolescents and boys. Also, the majority (but not all) of the sexual harassment cases were men harassing other men or young men. Prescinding from the complex psychological questions of how much a person’s sexuality has to do with abuse, how much differentials in power do and how much proximity does, we should state clearly: Many priests abusers had a homosexual orientation. That is undeniable.

The Pillar reported Rev. Thomas Berg, a professor of moral theology at St. Joseph’s Seminary in Yonkers, New York, said it is “obviously a scandal” that a priest would use location-based hookup apps and added there is “a real disconnect between the appearance of a man who presumably is earnestly striving to live the life of chastity, when it becomes glaringly evident that he is dramatically failing at that because he’s gone to hookup apps to look actively for sexual partners — that itself is an enormous scandal.”

The issue is compounded when a cleric in a position of ecclesiastical authority is found to “engage in a double life,” Berg stated.