A mob of Hindu nationalists stormed a police station in India on Sunday, beating a pastor and two other Christians, in an assault captured on video that went viral on social media.

On Monday, Chhattisgarh police arrested two BJYM members for participation in the assault on the Christians.

The viral video of the incident shows the pastor being beaten with shoes as police attempt to control the mob and force them out of the office.

“The unprovoked physical assault on a pastor and his congregation in the outskirts of Raipur in Chhattisgarh is to be condemned in the strongest manner possible,” Father Babu Joseph, the former spokesperson of the Catholic Bishops Conference of India (CBCI), told Crux.

“What is worse, it is poor commentary on the state police force is that the marauding crowd had the audacity to trespass the police officer’s chamber to carry on with the assault,” the priest said. 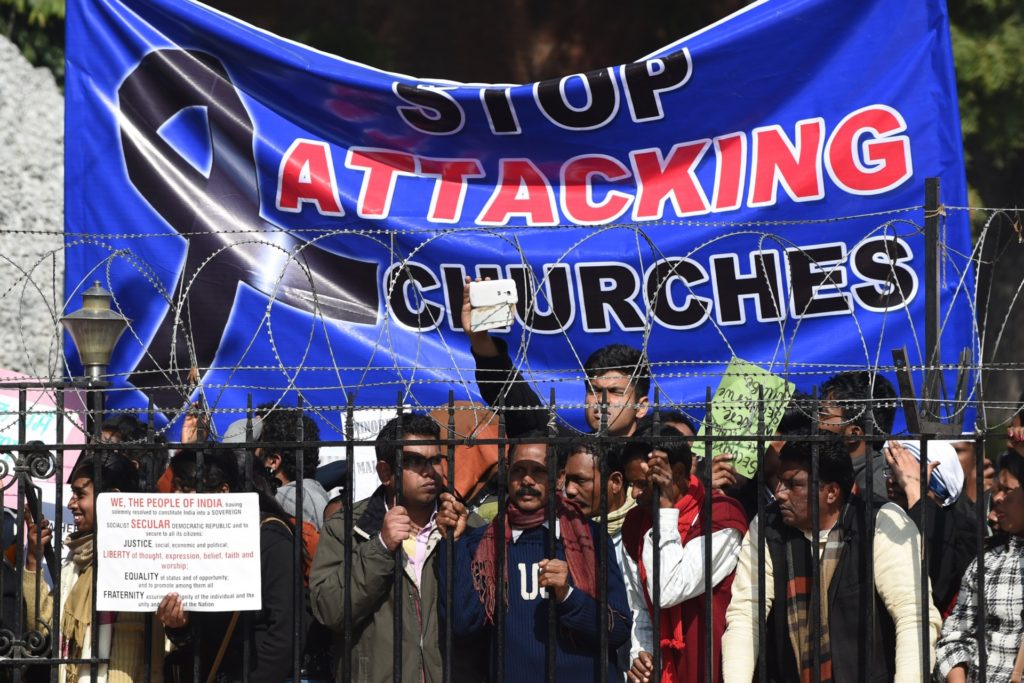 A minority Indian Christian holds a placard with the Preamble to the Constitution of India (bottom L) by a church perimeter fence topped with razor wire as they demonstrate outside the Sacred Heart Cathedral following recent attacks on churches in New Delhi. (SAJJAD HUSSAIN/AFP via Getty)

Father Joseph said government’s failure to protect religious minorities in the country has a significant share in the responsibility for such attacks.

“That such mindless violence is occurring periodically goes to show that the administration is either complicit in the crime or just looking the other way,” the priest said. “In both cases it is culpable in so far as it is abdicating its constitutional responsibility of maintaining law and order and provide protection to the weaker sections of the society.”

“Is there a method in this madness?” he asked. “It seems there is. Anti-Christian violence takes a quantum leap in states administered by political parties other than BJP, and the hapless Christians are victimized.”