“I am following with concern the increase of tensions that threaten to inflict a new blow to the peace in Ukraine, and call into question the security of the European continent, with wider repercussions,” the pope told pilgrims gathered in Saint Peter’s Square for his midday Angelus message.

“I make a heartfelt appeal to all people of good will, that they may raise prayers to God Almighty, that every political action and initiative may serve human brotherhood, rather than partisan interests,” the pontiff said, in clear reference to the Russian military buildup at the border with Ukraine.

“Those who pursue their own interests, to the detriment of others, disregard their human vocation, as we were all created as brothers and sisters,” Francis asserted, before announcing a special day of prayer for a peaceful resolution to the conflict. 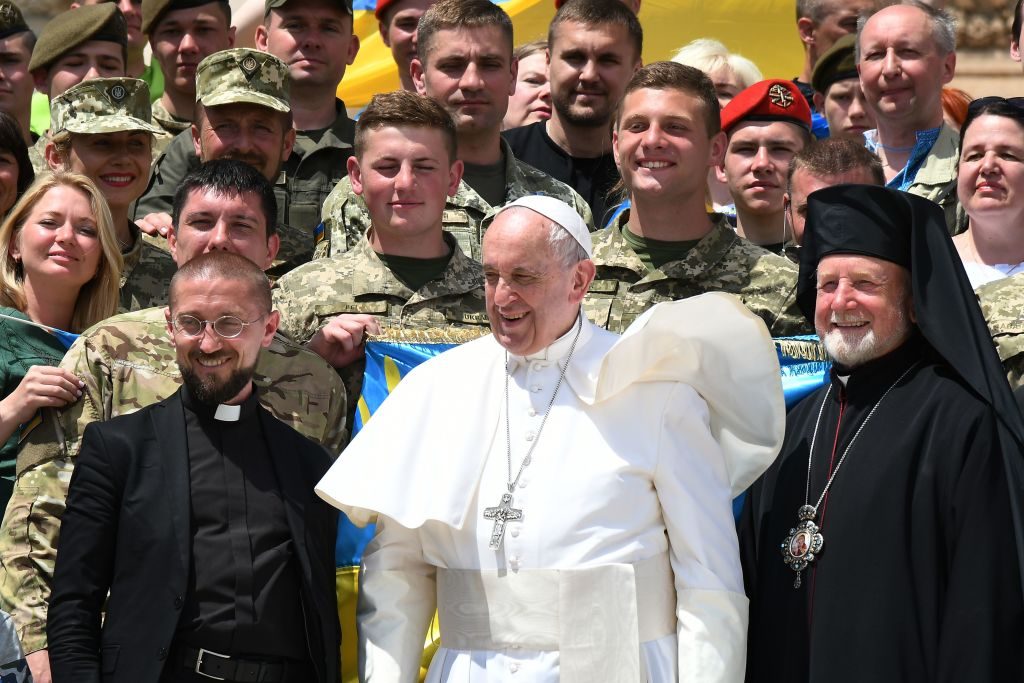 Pope Francis pose with Ukraine military and their relatives at the Saint Peter’s square, in the Vatican, at the end of his weekly general audience on May 22, 2019. (VINCENZO PINTO/AFP via Getty Images)

“For this reason, and with concern, given the current tensions, I propose that next Wednesday, 26 January be a day of prayer for peace,” he concluded.

The pope’s warning followed closely on a strongly worded statement from the Council of European Bishops’ Conferences (CCEE), which argued that Russia’s military aggression poses a “real threat” to world peace.

In Friday’s message, CCEE President Archbishop Gintaras Grušas of Vilnius, Lithuania, expressed the closeness of the European bishops to “the Churches in Ukraine and to all its people” in the face of the “dramatic” tension around Ukraine.

The actions of the Russian military forces have been universally seen as “a real threat to peace throughout the world,” Archbishop Grušas stated, while urging world leaders not to forget “the tragic World Wars of the last century” so that “international law as well as the independence and territorial sovereignty of each country will be defended.”