Along with five others, Cardinal Zen was arrested in May 2022 for allegedly colluding with foreign forces and later charged with failing to register the now-defunct 612 Humanitarian Fund, which provided financial and legal aid to pro-democracy protesters.

All the defendants have pleaded not guilty to the charges and their defense is expected to argue that the group had a right to associate under Hong Kong’s Basic Law, which has been the law of the land since the British handed the territory over to China in 1997.

The Beijing-imposed national security law took effect in June 2020, and criminalized loosely defined activities such as “secession,” “collusion with foreign forces,” and “acts against national security,” with offenders facing up to life imprisonment. 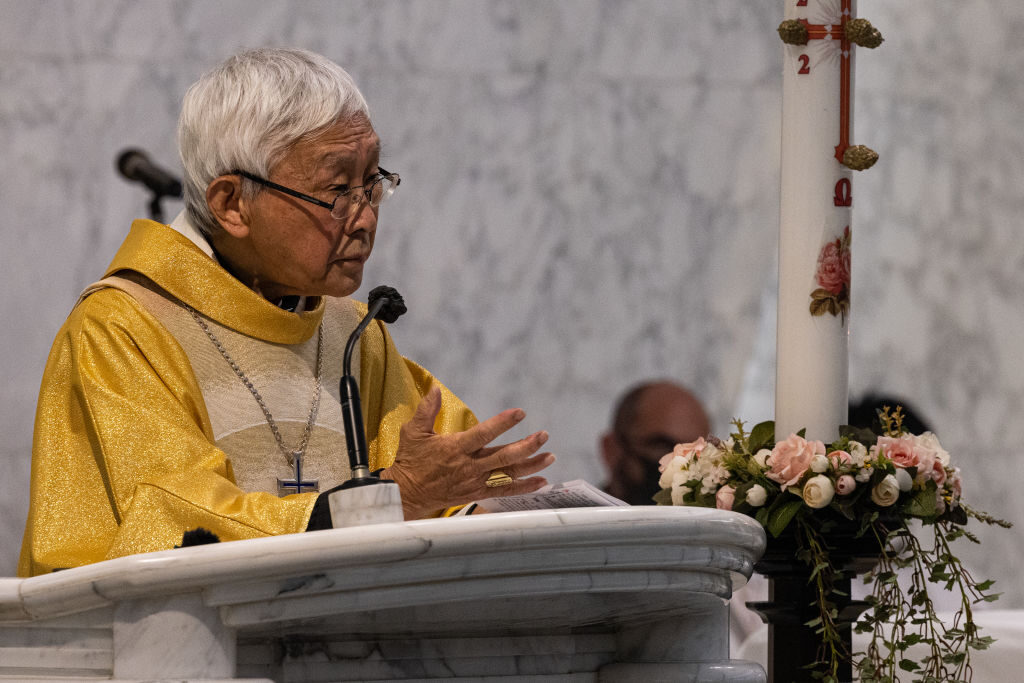 Cardinal Joseph Zen holds a mass at the Holy Cross Church on May 24, 2022 in Hong Kong, China. The former Catholic Cardinal and four other trustees of a now-defunct fund for protesters were arrested by national security police on charges of “collusion with foreign forces”, and later released on bail. ( Louise Delmotte/Getty Images)

“The Chinese government wants to cut off all forms of organizing and solidarity that run outside of the Communist Party’s control in Hong Kong,” said William Nee, research and advocacy coordinator at Chinese Human Rights Defenders. “The fact that Cardinal Zen is compassionate, caring, and well-respected in Hong Kong actually makes him a threat to the ruling authorities.”

The 90-year-old Zen has been a staunch supporter of democracy in Hong Kong and held a “walkathon” for universal suffrage, celebrated Masses in remembrance of the 1989 crackdown in Tiananmen Square, and visited the Occupy Hong Kong site to offer moral support to the thousands who had gathered there.

He is also well known for his prison ministry, which has been a hallmark of his priestly work from the outset.

This July, the European Parliament (EP) condemned Zen’s arrest, calling it an “attack” on basic freedoms.

“Parliament condemns the arrests of Cardinal Joseph Zen, one of the strongest advocates of Hong Kong’s pro-democracy movement, and of the other four trustees of the 612 Humanitarian Relief Fund,” the EP stated, insisting that these and similar repressive actions “constitute an attack on the freedoms guaranteed in the Hong Kong Basic Law, including the freedom of religion or belief.”

“The resolution urges the Hong Kong authorities to drop all charges against Cardinal Zen and the other four trustees,” it added.

Myanmar Cardinal Charles Bo also denounced the arrest, describing it as an tragic example of how far Hong Kong has fallen from its prior status as a beacon of freedom.

“Hong Kong used to be one of Asia’s freest and most open cities,” said Bo, who is the president of the Federation of Asian Bishops’ Conferences. “Today, it has been transformed into a police state. Freedom of expression, freedom of the press, freedom of assembly and association, and academic freedom have all been dismantled.”

Bo also denounced “recent propaganda attacks against the Church in pro-Beijing media in Hong Kong, and of growing self-censorship among religious leaders due to the circumstances.”

“To see a city that was a beacon for freedom, including religious freedom, move so radically and swiftly down a much darker and more repressive path is heartbreaking,” he said.

For its part, the Vatican never criticized the arrest, limiting itself to a one-line statement saying that “the Holy See has received the news of Cardinal Zen’s arrest with concern and is following the evolution of the situation with extreme attention.”

Pope Francis has similarly declined to show support for Zen and last week refused to acknowledge that his arrest and trial constituted a violation of religious freedom.

Zen has been a vocal critic of Pope Francis’s appeasement policy with the Chinese Communist Party (CCP), accusing the pope of selling out the underground Catholic Church.

Following the Vatican’s 2018 secret accord with the CCP on the appointment of bishops in China, Zen insisted that Pope Francis is “naïve” in dealing with a country about which he knows little.

“The pope doesn’t know much about China. And he may have some sympathy for the Communists, because in South America, the Communists are good guys, they suffer for social justice,” Zen said. “But not the [Chinese] Communists. They are persecutors.”

“So the situation is, humanly speaking, hopeless for the Catholic Church: Because we can always expect the Communists to persecute the Church, but now [faithful Catholics] don’t get any help from the Vatican,” he said.

“The Vatican is helping the government, surrendering, giving everything into their hands,” Zen said.

After the Vatican renewed the agreement in 2020, Zen described the extended deal as a “complete defeat” for faithful Catholics.

“With the protection of this agreement, the government forced the people from the underground to join the Patriotic Association… which is objectively schismatic,” Zen said.

Zen also had sharp words for the Vatican’s unwillingness to come to the defense of Hong Kong pro-democracy protesters.

“I’m sorry to say that we have nothing to expect from the Vatican,” Zen said in 2020. “In these past few years, they have never said anything to reproach China for their persecution.”

Instead, the Vatican has “surrendered the Church to the Chinese authority,” he said.

“In Hong Kong, in all this time of turmoil, with so many young people suffering the brutality of the police, not a word from the Vatican,” Zen continued, adding that the Vatican is “always trying to please the Chinese government.”

He said the Holy See’s policy is “foolish,” since “the Communists, they never grant anything, they just want to control.”