ROME — Pope Francis has decided not to protest the Hong Kong trial of Cardinal Joseph Zen, arrested last May for his part in the nation’s pro-democracy movement.

This week a reporter asked the pope whether Cardinal Zen’s arrest and trial constitute a violation of religious freedom, to which the pontiff basically answered that Zen got what was coming to him.

The pope first denied that China is undemocratic, insisting that such labels are unhelpful because China is a very “complex” country. Second, he acknowledged Zen’s arrest but refused to criticize it or to defend the 90-year-old cardinal.

“Cardinal Zen is going to trial these days, I think. And he says what he feels, and you can see that there are some limitations there,” he stated.

Remarkably, the European Parliament (EP) condemned the arrest of Zen this summer in the strongest of terms, while the pope was silent.

“Parliament condemns the arrests of Cardinal Joseph Zen, one of the strongest advocates of Hong Kong’s pro-democracy movement, and of the other four trustees of the 612 Humanitarian Relief Fund,” the EP stated in July, noting that these and similar repressive actions “constitute an attack on the freedoms guaranteed in the Hong Kong Basic Law, including the freedom of religion or belief.”

“The resolution urges the Hong Kong authorities to drop all charges against Cardinal Zen and the other four trustees,” it added.

Yet, when asked directly whether he agrees that Zen’s arrest was a violation of religious freedom, the pope demurred.

Myanmar Cardinal Charles Bo also condemned the arrest of his brother cardinal, describing it as an appalling example of how far Hong Kong has fallen from its prior status as a free state. 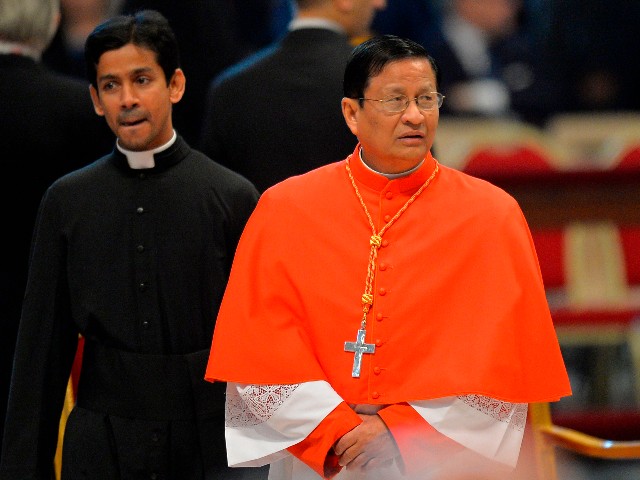 “Hong Kong used to be one of Asia’s freest and most open cities,” Bo, who is the president of the Federation of Asian Bishops’ Conferences, said. “Today, it has been transformed into a police state. Freedom of expression, freedom of the press, freedom of assembly and association, and academic freedom have all been dismantled.”

Cardinal Zen was arrested and charged “simply because he served as a trustee of a fund which provided legal aid to activists facing court cases,” Bo noted. “How can it be a crime to help accused persons have legal defense and representation?”

Bo also denounced “recent propaganda attacks against the Church in pro-Beijing media in Hong Kong, and of growing self-censorship among religious leaders due to the circumstances.”

“To see a city that was a beacon for freedom, including religious freedom, move so radically and swiftly down a much darker and more repressive path is heartbreaking,” he said, adding that the Chinese government has “repeatedly and blatantly” broken promises made in the Sino-British Joint Declaration, a situation he called “appalling.”

For his part, Cardinal Zen has repeatedly criticized Pope Francis’s appeasement policy with the Chinese Communist Party (CCP), describing the pope as naïve and accusing him of selling out the underground Catholic Church. His trial begins Monday.

Francis refused to back Hong Kong’s pro-democracy demonstrations and has conspicuously refrained from criticizing the CCP’s egregious and well-documented abuses against the Uyghur Muslims in China’s Xinjiang region, despite numerous requests that he do so.