In another setback for Democratic Los Angeles Mayor Eric Garcetti’s effort to move homeless people into neighborhood recreation centers, a homeless individual who was sheltered at a rec center in Granada Hills has reportedly tested positive for the Wuhan coronavirus, igniting fears that the virus could start to spread like wildfire among the city’s homeless population.

Los Angeles County Department of Public Health Director Barbara Ferrer announced Wednesday that 12 homeless people have been diagnosed with COVID-19. Among those is believed to be an individual who recently stayed at the Granada Hills Recreation Center in the San Fernando Valley.
It is believed to be the first time someone had tested positive for coronavirus at one of the L.A. rec centers converted into homeless shelters under the mayor’s plan.

A deep cleaning is being done of the facility after city officials became aware of the test results on Monday, according to the L.A. Daily News. The shelter had around 40 people staying there. It remains unclear how many people the infected individual came in contact with while staying at the shelter.

One homeless person who stayed at the shelter told the Los Angeles Times that “chaos” broke out in the gymnasium after residents were told about the test result, with at least six people moving out of the venue. “I left everything I had there. I left with the clothes on my back. I said I’m not saying another night in there,” said the man, identified only as “Victor.”

Victor told the Times that the infected man “had been there a couple days and he was coughing the whole time.”

Another person staying at the shelter told the L.A. Daily News that residents of the shelter were not directly informed of who had tested positive. She told the newspaper that a yellow tape had been placed down around the cot that the person was using.

Mayor Garcetti’s plan to move the city’s tens of thousands of homeless people into neighborhood shelters has faced opposition from those who fear the cramped quarters will only help the coronavirus to spread among the city’s transient population and then to the surrounding communities. 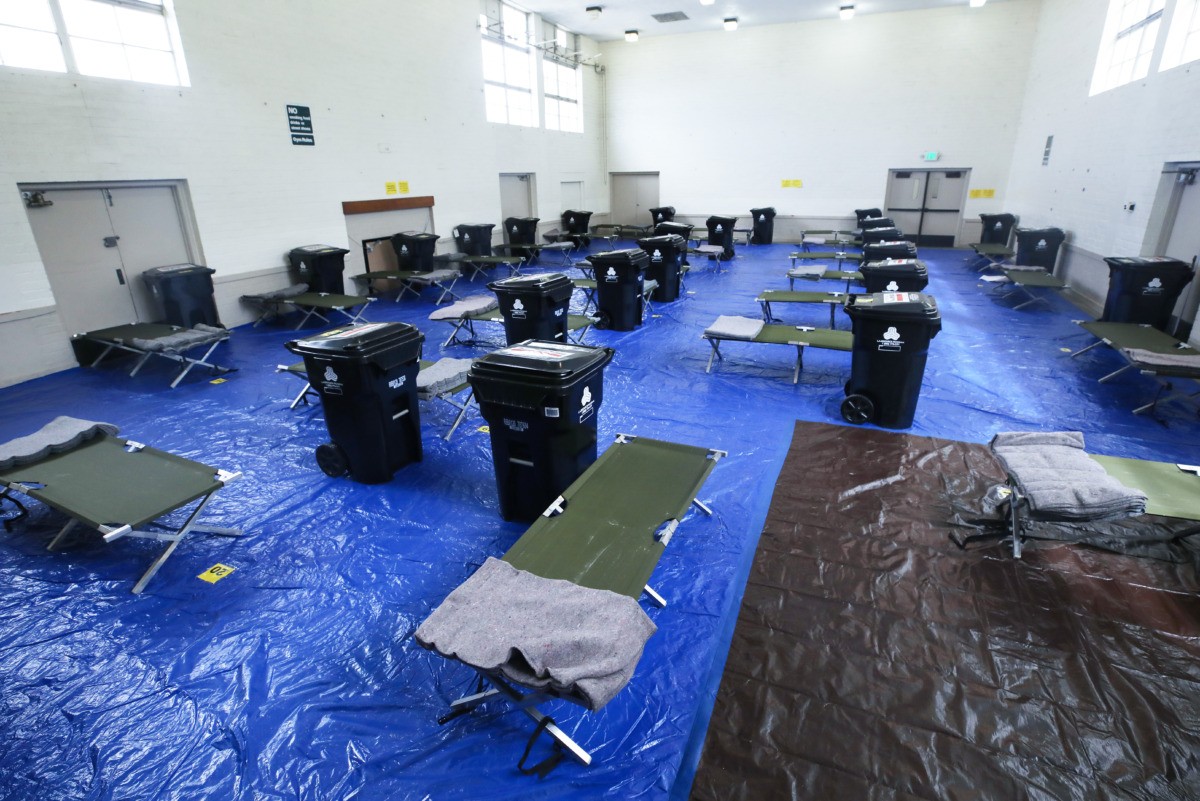 A resident of the Los Angeles community of Pacific Palisades reportedly filed court papers on Tuesday seeking to stop the city and county from proceeding with the plan, calling it a “dangerously misguided policy” that could jeopardize public health.
Last month, Breitbart News obtained an unconfirmed list of all of the recreation centers where Garcetti planned to house homeless people during the coronavirus pandemic. They include centers in densely populated areas like Hollywood, near the intersection of Cole Avenue and Santa Monica Boulevard, and the Fairfax district in Pan-Pacific Park.
Another shelter is located near Watts at Compton Avenue and 109th Street. Other homeless shelters include venues in Westwood, Echo Park, North Hollywood, and Cheviot Hills.
Breitbart has been on the forefront of reporting on the opposition to Mayor Garcetti’s plan, as well as the inconsistencies in city policy, such as the decision to keep open-air farmers markets open during the pandemic.
Mayor Garcetti’s strategy fits with the policy set by Democratic California Gov. Gavin Newsom, who has said he would like all of the state’s homeless to be moved indoors during the coronavirus pandemic.
Follow David Ng on Twitter @HeyItsDavidNg. Have a tip? Contact me at dng@breitbart.com