Claim: The breakthrough vaccine for the Chinese coronavirus is not part of the Trump administration’s Operation Warp Speed.

The Covid-19 [coronavirus] vaccine developed by Pfizer and BioNTech is being produced as part of the Trump administration’s Operation Warp Speed, the revolutionary public-private partnership launched earlier this year to speed the development, production, and distribution of vaccines to protect against the virus.

The companies announced that they were developing the vaccine in collaboration with Operation Warp Speed in July.

“Pfizer Inc. (NYSE: PFE) and BioNTech SE (Nasdaq: BNTX) today announced the execution of an agreement with the U.S. Department of Health and Human Services [HHS] and the Department of Defense [DOD] to meet the U.S. government’s Operation Warp Speed program goal to begin delivering 300 million doses of a vaccine for COVID-19 in 2021,” a press release from the companies stated in July.

The press release from the companies included a quote from HHS Secretary Alex Azar that described the agreement as adding the Pfizer-BioNTech vaccine to “Warp Speed’s diverse portfolio”:

Americans will receive the vaccine for free consistent with U.S. government’s commitment for free access for COVID-19 vaccines.

“We’ve been committed to making the impossible possible by working tirelessly to develop and produce in record time a safe and effective vaccine to help bring an end to this global health crisis,” said Dr. Albert Bourla, Pfizer Chairman and CEO. “We made the early decision to begin clinical work and large-scale manufacturing at our own risk to ensure that product would be available immediately if our clinical trials prove successful and an Emergency Use Authorization is granted. We are honored to be a part of this effort to provide Americans access to protection from this deadly virus.”

“Expanding Operation Warp Speed’s diverse portfolio by adding a vaccine from Pfizer and BioNTech increases the odds that we will have a safe, effective vaccine as soon as the end of this year,” said HHS Secretary Alex Azar. “Depending on success in clinical trials, today’s agreement will enable the delivery of approximately 100 million doses of this vaccine to the American people.” 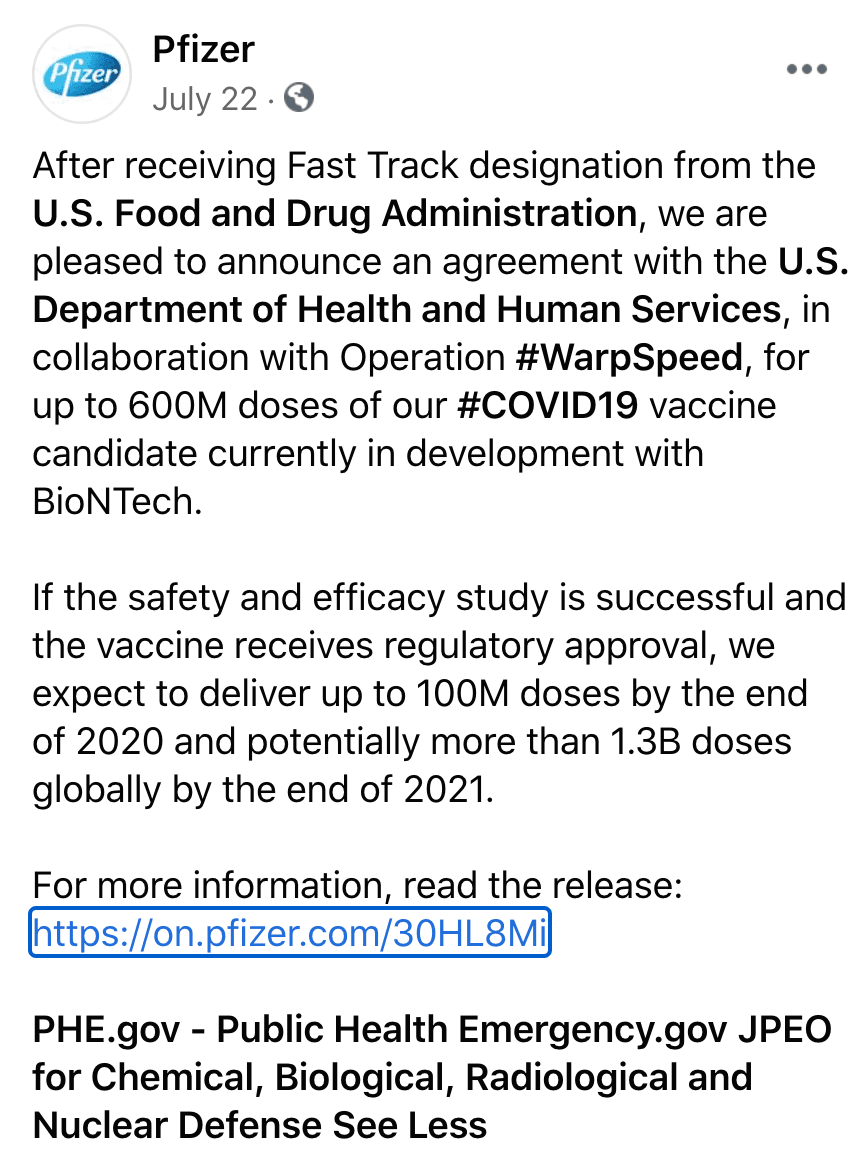 The U.S. government consistently reported on the developments of Pfizer’s vaccine as if they were part of the Operation Warp Speed, with no objections from the company or the media.

Confusingly, some media outlets and an executive from the company itself on Monday denied Pfizer was a part of Warp Speed.

“No, Pfizer’s apparent vaccine success is not a function of Trump’s ‘Operation Warp Speed,” a Washington Post headline declared.

That contradicts a story in the Washington Post in July about the agreement with Pfizer, which included the subhead: “The contract is the largest yet under the Trump administration’s Operation Warp Speed program, and will start with 100 million doses.”

“We were never part of the Warp Speed,” Pfizer Vice President Kathrin Jansen told the New York Times. “We have never taken any money from the U.S. government, or from anyone.”

The first part of that statement is false and the second part of the statement is misleading. Pfizer had decided that it would pursue the vaccine on its own, taking the financial risk that the drug would not wind up being effective. And unlike other companies pursuing a vaccine, Pfizer did not receive up-front financial backing before it began developing and manufacturing its vaccine.

Pfizer did receive fast-track designation from the Food and Drug Administration and a promise by the U.S. government to buy 100 million doses for the public at a price of $1.95 billion if the drug proved safe and effective.  That contract is part of the Warp Speed project.