The East Lansing Education Association (ELEA) — a local teachers union in Michigan — blasted parents in a Facebook post on Wednesday over a desire to reopen schools.

The union posted this graphic, which was deleted Friday morning: 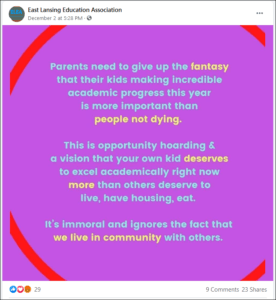 “Parents need to give up the fantasy that their kids making incredible academic progress this year is more important than people not dying,” the statement read.

It went on: “This is opportunity hoarding and a vision that your own kid deserves to excel academically right now more than others deserve to live, have housing, eat.”

The message ended, “It’s immoral and ignores the fact that we live in a community with others.”

The union’s statement runs contrary to what Dr. Anthony Fauci has recommended.

“Close the bars and keep the schools open,” Fauci said on “This Week” Sunday.

“Obviously, you don’t have one size fits all. But, as I said in the past, the default position should be to try as best as possible within reason to keep the children in school, or to get them back to school,” he told host Martha Raddatz.

In November, CDC Director Robert Redfield said schools are “one of the safest places” kids can be amid the pandemic.

The teachers union has seemingly disagreed with that notion and has demanded work rules and circumstances be negotiated.

Unions across the country sought leverage in the waning months of the summer, hoping to score a federal bailout in exchange for opening schools in September. Many states opened anyway.

Michigan is in the middle of a three-week, Gov. Gretchen Whitmer (D)-ordered “pause” and many schools are currently all-virtual, requiring many parents to do the job of the public schools.

But the ELEA message is more in line with the sentiments of Robert Chanin, a former attorney for the National Education Association, who laid bare the union’s objectives as he gave a farewell speech to the group’s annual convention in 2009:

Chanin told the union delegates that it cares about “closing achievement gaps, reducing dropout rates, improving teacher quality, and the like,” but “they need not and must not be achieved at the expense of due process, employee rights, and collective bargaining. That is simply too high a price to pay.”