The mental health profession is engaged in a “total departure from reality,” says psychiatrist Miriam Grossman, M.D., who argues that those who should be helping gender dysphoric children and teens live in reality — even when reality is painful — are teaching them they can “deny biology and not pay a big price for it.”

In a telephone interview with Breitbart News, Grossman said she now focuses her practice on helping parents of children and teens who claim they no longer want to live as a person of their biological sex.

“I’m seeing parents in my practice, and now, my practice is totally devoted to this issue,” she explained. “And I really can’t even imagine a more horrific situation.”

In a recent column at the Federalist, Grossman told the story of “Cheryl,” the mother of an 18-year-old girl who identifies as a male and has been taking testosterone for six months.

Cheryl is convinced she and her husband were misled by a gender clinic and that “Eva” did not have adequate evaluations and therapy. For the first time in her life, Cheryl is taking psychiatric medication for her constant crying, sleeplessness, and anxiety.

Cheryl feels she’s at odds with everyone: Eva, family members, friends, schools, doctors, therapists, politicians, the media, and the culture. On how many fronts can one person fight?

I was not surprised when Cheryl told me, “Sometimes I wish my daughter had cancer. The whole world would be there for me.” 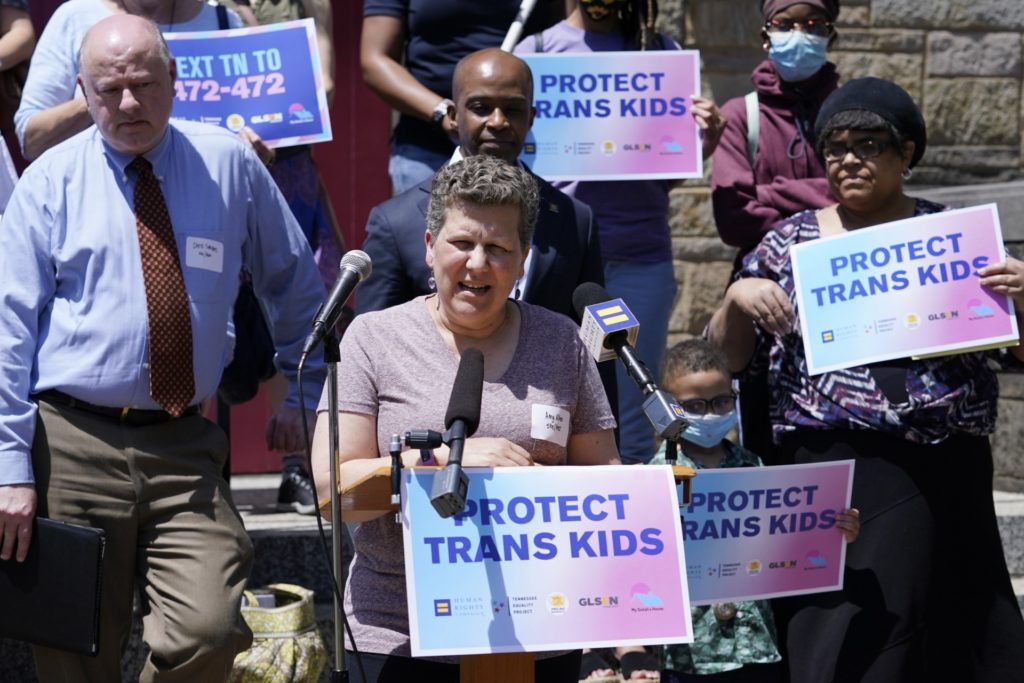 In this May 21, 2021, file photo, Amy Allen, the mother of an 8th-grade transgender son, speaks after a Human Rights Campaign round table discussion on anti-transgender laws in Nashville, TN. (AP Photo/Mark Humphrey, File)

“The mental health profession was hijacked a long, long time ago by radical agendas,” Grossman told Breitbart News. “And this is one of them. It has just exploded, and it’s an epidemic.”

“A mother whose daughter was in a residential treatment center for depression, cutting and trying to hang herself, told me one-third of the kids in residential treatment identify as non-binary or trans,” she said. “Now, mind you, this is a diagnosis. I mean, non-binary didn’t even exist at the time that I was training to be a psychiatrist. We never dreamt we would see one case in our whole life of a transgender individual. That’s how rare it was. It was something that you read about or maybe heard about on the news.”

Grossman observed transgender individuals such as Christine Jorgensen and Renée Richards were men well into adulthood at the time of transition.

“It’s a whole totally different thing than having a little 12-year-old tell you that she’s a boy, and having to affirm her immediately,” she said. “So, I would say it’s no longer that we’re approaching the edge of a cliff; we’ve gone over the edge of that cliff already, and now we’re just in a freefall. And I don’t know how this thing is going to end.”

As just one example of the “freefall” Grossman sees happening when it comes to gender ideology, the psychiatrist described how elective double mastectomies can now be required to be covered by health insurers in California.

“If you are a transgender individual who has breasts, the way that the insurance in California will refer to your breasts, when you want them removed, is they will call them ‘abnormal structures of the body caused by congenital defects,’” she said.

Lara said in a statement:

Lara cited Kenneth B. Schnoll, general counsel and deputy insurance commissioner, who wrote in response to an inquiry from Trans Family Support Services regarding denials of coverage for elective mastectomy for minor girls:

An insurer may not deny coverage for male chest reconstruction surgery for female-to-male patients undergoing treatment for gender dysphoria, based solely on a patient’s inability to meet a minimum age threshold because insurers must consider a patient’s specific clinical situation to determine actual medical necessity based on evidence-based standards of care.

“So, it’s just a total departure from reality,” Grossman asserted. “And that’s what my colleagues in the mental health profession are doing. Instead of representing reality and encouraging children and adolescents to live in reality — because that’s what emotionally healthy people do, they live in reality, even when it’s a very painful reality — but in this case, we’re basically telling kids that biology isn’t important, that it’s only what you think that’s important. And whatever you think, we’re going along with it, so just lead the way.” 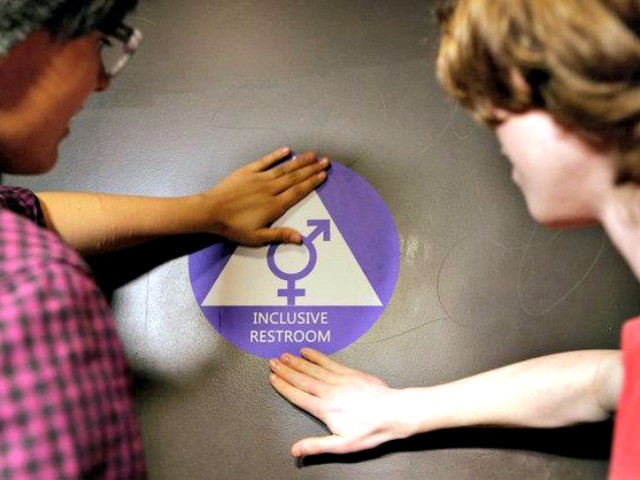 Students placed a sticker on the door of a new gender-neutral bathroom at Nathan Hale High School in Seattle on Tuesday. (Elaine Thompson/Associated Press)

Asked what she tells parents when they come to see her about their child who claims to identify as another gender, Grossman explained there is likely some reason the child or teen could be “running to a new identity, and that we have to figure out what that reason is.”

“Is it a girl who was abused and feels that, if she’s a boy, she’ll never be abused?” she suggested. “Is it that her body’s changing and she doesn’t like the attention that she’s getting for her developing body? Has she been raised in an environment that leads her to believe that being a woman in this day and age is such a horrible thing and that she just thinks it’s impossibly difficult to be a woman? Or, is she trying to find a way to be accepted and celebrated by friends?”

Grossman acknowledged that “very often, these are kids who are socially awkward, and they’re on the autism spectrum.”

“They never really made friends easily,” she explained. “And when you come out as trans with a new name and new pronouns, you do get a lot of positive attention and that feels great — for a little while.”

Grossman noted that, besides anxiety and difficulty fitting in socially, young people on the autism spectrum also exhibit “black-and-white thinking, so they see the world in a very black and white way.”

“So, if a girl starts to develop breasts and gets her period, and she doesn’t really feel comfortable with it, or she doesn’t like it, she might think, ‘Oh, then that must mean that I’m a boy,’” she explained. “And, if she goes online, or she talks to her school counselor, she might very well be given that message: ‘If you don’t feel comfortable in your body, did you ever think that maybe you’re a boy?’ And this happens all the time now.”

“It’s important that we live in reality, and when you reject biology, we’re not living in reality,” Grossman said is her overarching message. “We’re letting kids escape reality by saying you can deny biology and not pay a big price for it.”