A California mother whose 11-year-old daughter has a rare disease that impacts her ability to digest food says she was scammed while trying to purchase baby formula amid the nationwide shortage.

Keely Aguilar’s daughter, Nataliyah, has Bainbridge Roper Syndrome, which per the National Institutes of Health (NIH), is “characterized by developmental delay or intellectual disability, typically in the moderate to severe range, with speech and language delay and/or absent speech.” The NIH indicates that digestive complications may arise as well.

“Natalia is one of only 200 people in the world, diagnosed with the disease. She has one of the worst cases,” as noted by CBS Bay Area.

In a video posted on social media, Keely explained that due to Nataliyah’s inability to digest food properly, she can only ingest formula that has been “pre-broken down” in a feeding tube through to her intestines. Due to the nature of this process, Nataliyah can not intake formula bought from a grocery store and must source it from elsewhere.

To further clarify the formula shortage and recall, and how it affects Nataliyah and children like her, I figured I’d put a video out to further explain. I truly appreciate the kindness and generosity of the people who are trying to help us. Thank you 🙏 ❤️#formularecall2022 #formulashortage #elecarejr #abbott #neocatejr

Keely had previously been using EleCare Junior, which was distributed through Abbott Nutrition, through a prescription from the pharmacy. However, Keely was left scrambling to find the formula after the company recalled certain formula products, including EleCare, produced at its lab in Sturgis, Michigan. As Breitbart News noted, the company “instituted a recall after four illnesses were reported in babies who had consumed powdered formula from” the plant.

While Keely was able to purchase another pre-broken down formula at $75 through the pharmacy and through “generous friends” from Amazon, she explained the formula only would last for approximately a couple of days. “So you start running into a financial situation, like this is not sustainable,” Keely said.

As Keely and Nataliyah’s story gained attention through social media and local outlets, many reached out to the Aguilars, offering help with finding and purchasing formulas, ABC 7 noted. However, as Keely claimed, among those who reached out were scammers. “I have been scammed. People are preying on this situation,” she stated.

Keely had been reached out to by a person via Facebook claiming to have formula for sale for $250, ABC 7 reported. “I thought I was doing my due diligence in asking a lot of questions. I asked for pictures, I asked for expiration dates on the cans. She had all the right answers,” Aguilar explained. “And so I sent money, and then her profile on Facebook disappeared.”

In her social media video, Keely suspects another person attempted to scam her from Ohio, saying they would only charge her shipping. “I am sorry, I am no longer paying anything for this because I was scammed,” Keely said in response to the supposed scammer, who she says disappeared after she told them off.

“What we need is for the Abbott facility to be opened back up again so they can produce this particular formula for our children again,” Keely said. 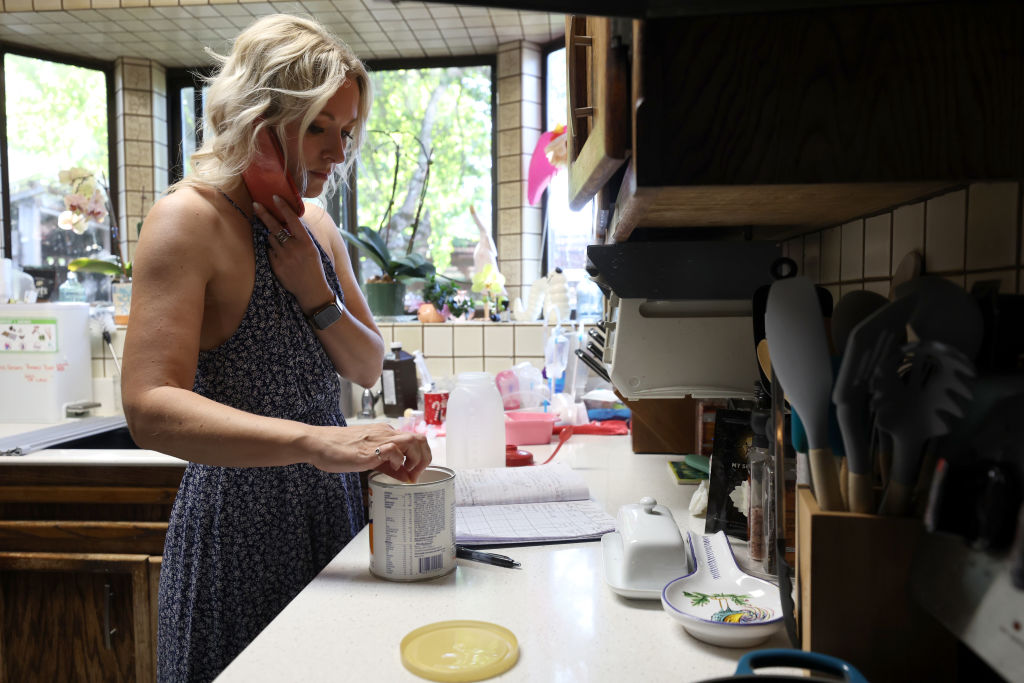 Keely Aguilar talks on the phone as she prepares formula for her 11-year-old daughter Natalyah Aguilar on May 18, 2022, in Santa Rosa, California. (Justin Sullivan/Getty Images)

On May 16, Breitbart News reported that the FDA and Abbott Nutrition reached an agreement to reopen Abbott’s formula plant in Michigan.

As News Channel 3 reported, “The plant could reopen in as soon as two weeks — but even once production starts, it could be another six to eight weeks before that product hits store shelves.”