The World Economic Forum (WEF) released the results of a survey Sunday, just before its annual summit in Davos, showing that more than two thirds of Italians consider immigration to be “mostly bad” for the country.

“The rise of populism, nationalism and protectionism are all associated with waning support for globalization,” WEF declares on its website, while claiming that its new poll “shows high levels of support worldwide for international collaboration, immigration, and the personal benefits from globalization.”

The poll, commissioned for the World Economic Forum’s Annual Meeting 2019 and conducted in January by the Qualtrics polling firm, does in fact indicate that a strong majority of citizens of Egypt, India, and Saudi Arabia consider immigration to be net positive for the nation.

The results are very different for Europe, however, which has suffered an ongoing immigration crisis going back to 2014.

In Poland, meanwhile, under a third (33 percent) of the nation thinks immigration is a net benefit while 67 percent believe immigration is mostly bad, whereas in Italy the share of the population that believes immigration helps the country is lower still at only 30 percent, with 70 percent holding the contrary view. 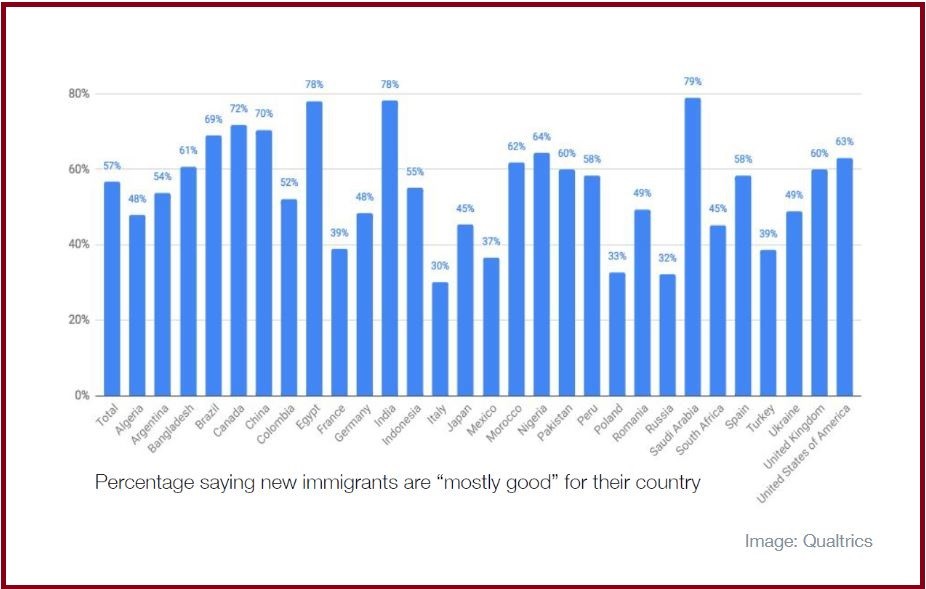 The WEF survey does not even bother to show the percentage of Hungarians who consider immigration a net benefit, given the generalized belief that it is not an immigrant nation.

The survey was taken by more than 10,000 people in 29 countries, WEF revealed. It backs up findings of similar polls indicating declining support for immigration across Europe. Regarding the immigration question, people were asked to choose between it being “mostly good” or “mostly bad” for the nation.

The survey, conducted by the Századvég Foundation’s Project 28, sampled one thousand adult citizens from each of the 28 EU countries and found a remarkable consistency of thought regarding the dangers of unchecked immigration.

While 78 percent of all Europeans believe that illegal immigration into their countries is a problem, more citizens in every single European country say that it is a “serious problem” than say it is not a problem or not a very serious problem, the poll found.

Europeans also expressed anxiety over the prospect of Africans migrants arriving en masse into Europe over the next decade, with 68 percent of those surveyed saying they either “strongly fear” or “moderately fear” such a scenario.

The perception of migration has also changed, as a majority of Europeans are now convinced that most migrants are attracted to Europe by “pull factors” such as the EU’s economy and social benefits.

In general, 58 percent of French people said that the net effects of immigration are negative, a figure echoed in questions on specific spheres of national life such as the economy and national identity.