In addressing the organizers of the annual intercultural Festival of Giavera del Montello, the pope praised them for including associations and groups of migrants to participate in their celebration, saying the festival has become “a crossroads, a place for meeting, for dialogue, for mutual understanding.”

The pontiff went on to contrast a “culture of hospitality” and a “culture of waste,” urging the festival organizers to continue “spreading a welcoming culture.”

“The reality of migration in our time has taken on characteristics that can sometimes be frightening,” Francis said. “Objectively, the phenomenon is very complex, and unfortunately there are criminal groups that take advantage of it; migrants risk being exploited even within geopolitical conflicts. Then they cease to be persons and become numbers.” 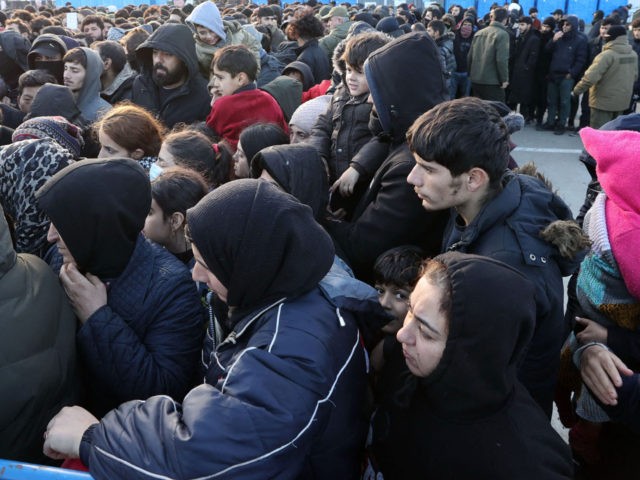 Migrants line up outside the transport and logistics centre near the Bruzgi border point on the Belarusian-Polish border in the Grodno region on November 20, 2021. – Poland said on November 20, 2021 that Belarus has changed tactics in their border crisis by now directing smaller groups of migrants to multiple points along the European Union’s eastern frontier. – Belarus OUT (Photo by MAXIM GUCHEK/BELTA/AFP via Getty Images)

“Therefore, there is more than ever a need for places in which the faces, stories, songs, prayers and art of migrants are put at the center,” he added.

Citing the Prime Minister of Albania, the pope said you must open the door to anyone who knocks “because it is God.”

“This thought touched me: the one who knocks on your door is God,” he said. “Open to him and leave your place for him.”

At the same time, Francis said, this attitude must not give way to a simplistic ideology.

“This way of seeing the reality of migration does not mean hiding or ignoring the difficulties and problems,” he said, encouraging his listeners to share their experiences with migrants to promote good politics and “to help government leaders at the local, national and international level to make choices that always combine a healthy realism with respect for people’s dignity.”

“I saw one of the paintings you brought, about the torture that migrants suffer when those traffickers take them,” Francis said. “And this happens today. We can’t close our eyes!”