The workplace abuses caused by the Fortune 500’s hiring of H-1B foreign contract workers are being recognized by establishment media outlets — even as the media ignores the Democrats’ plans to radically expand the programs.

“The whole [H-1B] model is to bring people who will happily work for 80 hours a week for less money,” Indan-born Salil Choudhary told Politico.  “They want somebody who will say ‘Yessir,’ ‘Yes ma’am,'” said Choudary, who is now a citizen and expects to trade in his information-technology career for a better-paying job as a real estate agent.

“It’s just kind of amazing that, you know, by legislation, we’ve sort of agreed on that this [H-1B] program should have a certain kind of ethical status, but [when] we just introduce this [sub-contractor] middleman, then that sort of washes the ethics away,” said KQED host Alexis Madrigal. “Why hasn’t the Department of Labor taken a more aggressive stance given that this is what seems to me … a kind of scam?” said Madrigal. “Everyone seems to know that this is exactly what’s going on.”

“The good news is that the Department of Labor can fix this — we don’t need to change the law,” Howard University professor Ron Hira told Madrigal on December 14.

“This is definitely a component of the H-1B landscape,” said Sophie Alcorn, an immigration lawyer who helps foreign graduates move into the United States. “It is not the entire field but the H-1B system is super messed up and these are definitely real concerns that happen,” she told KQED after Hira and Choudary had criticized the [H-1B] outsourcing program.

This criticism comes as Democrats in the House and Senate try to push a business-backed “Build Back Better” bill that would dramatically expand the flow of foreign graduates into the good jobs needed by U.S. graduates and their families. This corporate push for more contract workers has been almost entirely ignored by the corporate-owned establishment media — partly because the issue is extensively covered by Breitbart News.

So far, the establishment left’s criticism of the H-1B programs focuses narrowly on the low wages paid to the H-1B workers, most of whom are Indian or Chinese.

But the H-1B workers are smarter than their patronizing U.S. critics.

Many of the visa workers are eager to take low-wage jobs from U.S. graduates because they expect to get the hugely valuable deferred bonus of American citizenship for themselves, their children, relatives, grandchildren, and all of their many descendants.

That is the colossal government-provided prize that makes it rational for foreign workers to work long hours, seven days a week, for years on end, often at low wages, and often for uncaring U.S. executives and abusive Indian bosses who demand — and get — kickbacks, regardless of the workers’ skills or productivity.

This citizenship bonus has allowed many Fortune 500 executives to create a hidden, million-strong, white-collar workforce that is wholly separate from Americans’ national labor market.

In this parallel green card workforce, foreign workers offer to work for non-cash rewards that Americans cannot legally get, according to priorities set by bonus-seeking investors without regard to the judgment of American professionals, in offices operating under abusive Indian-style cultural rules that violate U.S. laws, and amid routine, government-tolerated corporate discrimination against American graduates and some Indian workers.

Indian managers in the United States are being allowed to take more and more skilled jobs from American graduates, Choudary told Madrigal: “The U.S. companies are hiring Indians to become the project managers whose responsibility is to keep the cost lowest possible and [they] hire people from their own [groups, so the Indian presence] is becoming bigger and bigger.”

But most editors and reporters in the United States treat this huge economic force mostly as family drama: Will this foreign student get a work permit? Can that imported contract worker renew his visa? Will those contract workers’ Indian-born children get favorable treatment?

President Donald Trump promised to revamp the outsourcing programs to help Americans — but his last-minute reforms have been discarded by President Joe Biden’s business-backed appointees.

The Department of Homeland Security is recycling 14,500 unused H-1B visas to employers after worried companies declined to accept the work visas they had won in the annual lottery. https://t.co/wN8adaBcvo

The votes of the U.S. professional class are large enough to decide national elections — and large enough to save the Democrats as Latinos increasingly move towards Trump’s reformist GOP. But those votes are being suppressed because U.S. legislators, Fortune 500 lobbyists, and family-drama reporters hide the economic damage to middle-class Americans by focussing the public’s attention on blue-collar amnesties and border migration.

“It is class warfare” by executives against professionals, organizer Kevin Lynn told Breitbart News in October.

“The goal is to displace the [white-collar] Americans that corporate executives view as expensive and undeserving, and easily replaceable with foreign workers that are more pliant and less expensive,’ said Lynn, who founded U.S. Tech Workers to help defend American professionals from the H-1B, J-1, L-1, OPT, and other outsourcing programs.

This massive displacement will have massive national impacts, he added: “American professionals are the ones that bring the [technological and business] innovation, and they’re being pushed out of the workplace.” 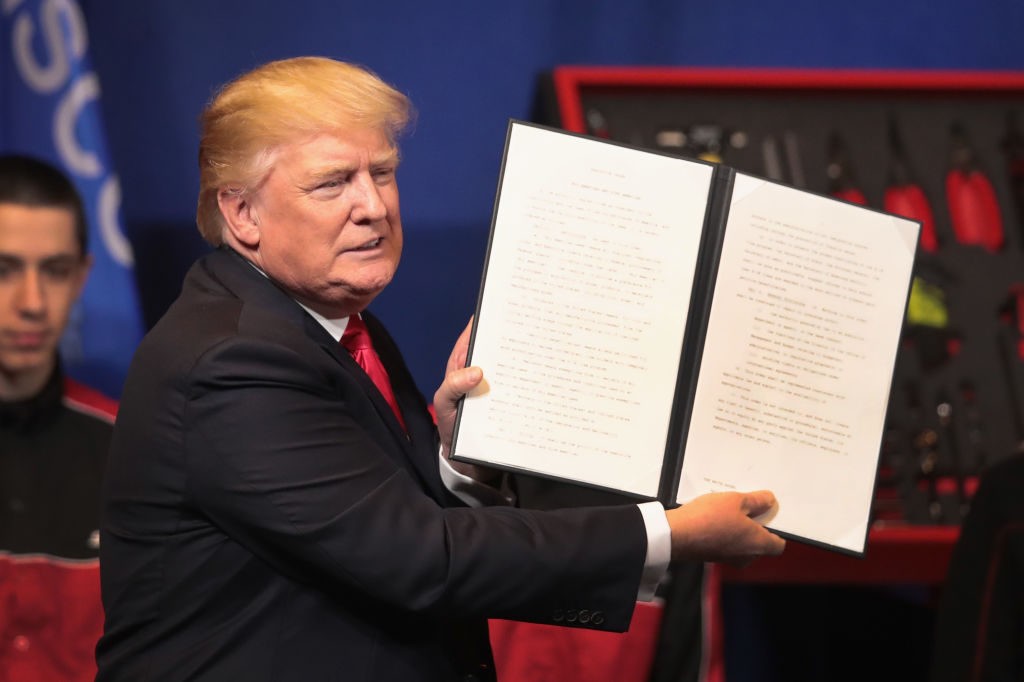 President Donald Trump signs an executive order to try to bring jobs back to American workers and revamp the H-1B visa guest worker program during a visit to the headquarters of tool manufacturer Snap-On on April 18, 2017 in Kenosha, Wisconsin. (Scott Olson/Getty Images)

But the left’s criticism of the many visa-worker programs is focused on the microeconomics of pay and benefits — not the national impact on the American middle-class, on Wall Street’s control of information technology, or on the lagging innovation that is allowing Chinese companies to take the critical leads.

“As [H-1B] companies like Infosys have expanded across the U.S., they’ve been quick to portray themselves as job creators,” Verge.com reported December 7. “Critics caution there is little evidence that staffing firms actually create new jobs that wouldn’t exist otherwise because, by design, they make money by winning contracts to supply companies with [foreign] workers,” said the left-wing site, which usually posts articles that are sympathetic to the H-1B business.

The left-wing Economic Policy Institute [EPI] does offer muted criticism of the H-1B and other white-collar outsourcing programs.

But this criticism remains low key because most progressives want to view the Fortune 500’s often-mercenary outsourcing workers as legal immigrants with the same solidarity rights as U.S. citizens.

Moreover, the left’s desire for more immigrant voters has created a party-wide political alliance with the Fortune 500.

On December 9, for example, the EPI posted a report showing how Fortune 500 companies and their Indian-run subcontracting firms gain by importing lower-wage Indians. The report is built on a whistleblower lawsuit which shows why companies import Indian workers over the 50-state union line for the Fortune 500 subcontracting jobs that would otherwise go to U.S. graduates:

What this report finds: Thousands of skilled migrants with H-1B visas working as subcontractors at well-known corporations like Disney, FedEx, Google, and others appear to have been underpaid by at least $95 million. Victims include not only the [foreign] H-1B workers but also the U.S. workers who are either displaced or whose wages and working conditions degrade when employers are allowed to underpay skilled migrant workers with impunity.

“In almost every single role, the H-1B workers are being paid $40,000 or $50,000 less than the US employees,” said Hira, who is one of one the report’s authors. “That’s the bad news and this has [done] been under multiple administrations, both Republican and Democrat.”

Hira’s EPI report does hint at the national impact:

This apparent blatant lawbreaking by one of the leading H-1B outsourcing companies should finally prompt action by the federal government to curb abuses of the H-1B program … The [Department of Labor] is in effect subsidizing the offshoring of high-paying U.S. jobs in information technology that once served as a pathway to the middle class, including for workers of color.

On the KQED show, Hira continued:

The politics of this is pretty straightforward: The people who profit from the wage theft are are lobbying very heavily in favor of the H-1B program as is. So this includes the tech industry. Facebook’s Mark Zuckerberg, has underwritten FWD.us which is very active in Washington D.C.  [and] has been active in writing op-eds in the Washington Post, supporting more H-1B’s … This is the big ask in Washington for FWD.us — and the U.S. Chamber of Commerce has asked for a doubling of the H-1B program — and they’ve prevented any kind of sensible reform.

American professionals, Hira added, “are not organized in any real way and no one’s really representing them in Washington to try to push for real reform.”

Amid silence from the left, some mainstream GOP legislators are trying to fix the problem.

For many years, a wide variety of polls has shown deep and broad opposition to labor migration and the inflow of temporary contract workers into jobs sought by young U.S. graduates. This opposition is growing, multiracial, cross-sex, non-racist, class-based, bipartisan,  rational, persistent, and recognizes the solidarity Americans owe to each other.