Just like whites, blacks without college degrees are more concerned about cheap-labor migration than are blacks with college degrees, according to a peer-reviewed study by a political-science professor at the University of Massachusetts at Amherst.

The data debunks claims that blacks’ views on migration are decided by their community’s sense of collective interest, author Tatishe Nteta wrote in American Political Research journal. He continued:

For African Americans who lost a job to an immigrant, working-class membership resulted in a 13 percentage point increase in the probability of support for an increased federal role in workplace oversight [againt employment of illegal immigrants] when compared to middle-class African Americans who experienced a similar loss.

The political result is that:

Working-class African Americans are significantly more supportive of policies that seek to: decrease the number of immigrants coming to the United States, increase the federal role in verifying the employment status of immigrants, and attempts to amend the Constitution’s citizenship provisions.

Nteta also provides evidence that economic concerns are more important for working-class blacks than for working-class whites, saying “it appears that class membership is a more powerful force in shaping the attitudes of Blacks in comparison to Whites.” 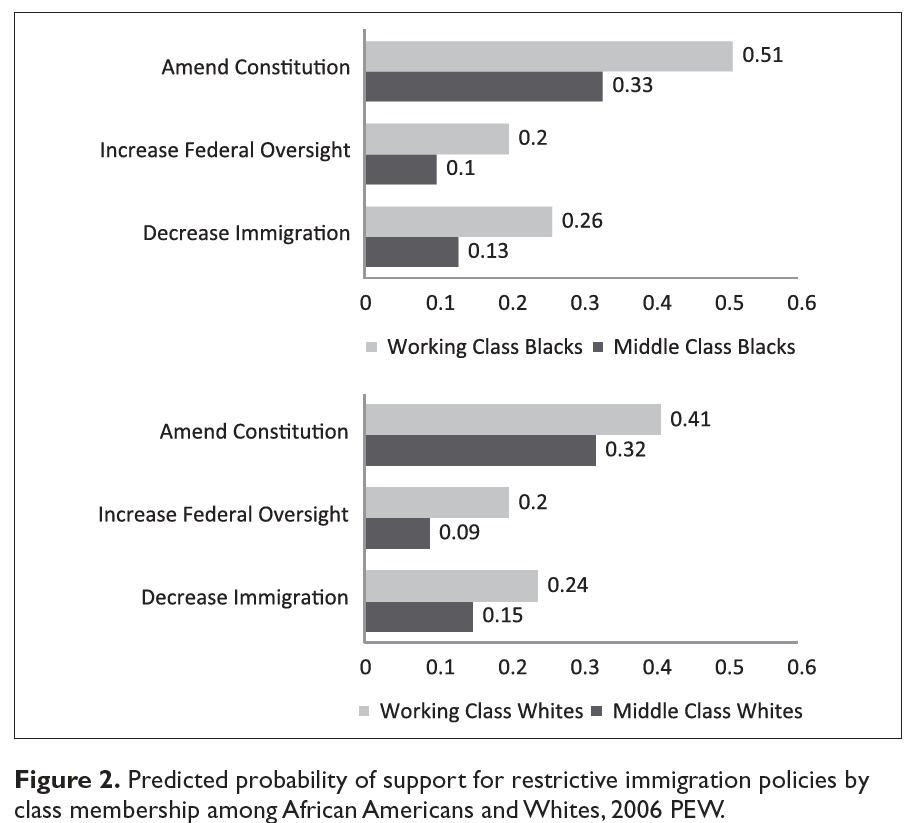 The middle-class vs working class split among blacks is very rarely noted in polls — but it may have played a crucial role in the 2016 election, which saw a large drop in African-American support for the Democrats’ pr0-migration candidate. The dropout was matched by a significant rise in turnout for the real-estate investor Donald Trump who promised a low-migration/high-wage economy.

If so, Trump’s African-American voters got some return for their votes:

The African American unemployment rate fell to 6.8%, the lowest rate in 45 years. I am so happy about this News! And, in the Washington Post (of all places), headline states, “Trumps first year jobs numbers were very, very good.”

In Chicago too, blacks got hundreds of bakery jobs at higher wages following the removal of illegal immigrants.

Interesting test case for economics of blue-collar immigration: Lower-status Americans get hired at higher wages at Cloverhill bakery in Chicago after illegals are fired, but high-status progressives don't care b/c they prefer more migration. https://t.co/0qokfiGwKj

The issue of black support for cheap-labor migration is highlighted by Trump’s gratitude to the conditional political support shown by music CEO Kanye West:

Kanye West has performed a great service to the Black Community – Big things are happening and eyes are being opened for the first time in Decades – Legacy Stuff! Thank you also to Chance and Dr. Darrell Scott, they really get it (lowest Black & Hispanic unemployment in history).

West is facing pressure from many prominent people in the black community:

You don't have to agree with trump but the mob can't make me not love him. We are both dragon energy. He is my brother. I love everyone. I don't agree with everything anyone does. That's what makes us individuals. And we have the right to independent thought.

In fact, the African-American split over immigration goes back to the 1800s and early 1990s, when black leaders argued over whether it was wiser to oppose low-wage immigration or else to foster their own elite leadership. For example, Booker T. Washington and Frederick Douglass urged business leaders to hire American rather than import more immigrants, while W.E.B. Du Bois favored leadership by the elite “Talented Tenth” and so helped create the NAACP advocacy group. 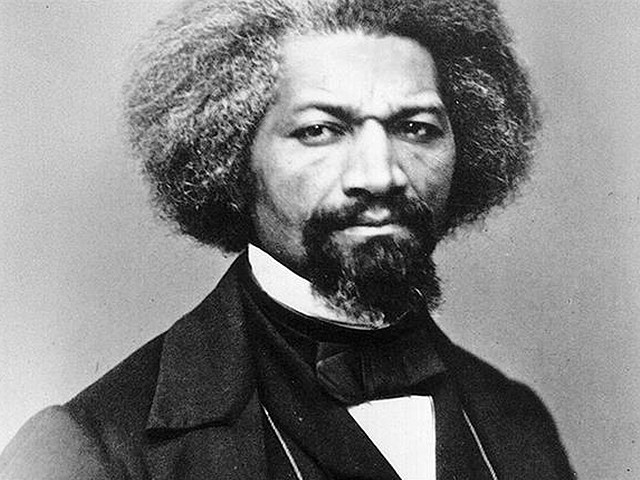 Many polls compare support for migration among race, education, income or status groups, but few pollsters release any of their data which shows splits by economics or education among blacks. The silence is rational because many pollsters have economic incentives to create evidence of public support for cheap-labor immigration, and to hide election-losing hostility to migration.

Even so, many polls also show that Americans — including blacks — want government’s migration policies to favor employees, not employers. An April poll by Harvard-Harris shows very strong African-American support for President Donald Trump’s immigration reform plans: 64 percent of blacks said they favored “a congressional deal that gives undocumented immigrants brought here by their parents work permits and a path to citizenship in exchange for increasing merit preference over preference for relatives, eliminating the diversity visa lottery, and funding barrier security on the U.S.-Mexico border.”

"About 65 percent of black Americans said they support Trump’s immigration compromise that would build a border wall along the U.S.-Mexico border, end chain migration and the Diversity Visa Lottery…" https://t.co/EqQtZOYggd

In his memoir,“The Audacity of Hope,” former President Barack Obama noted the migration concerns among working-class African-Americans, writing that “this huge influx of mostly low-skill workers provides some benefits to the economy as a whole… [but] it also threatens to depress further the wages of blue-collar Americans.” Yet working-class concerns are subordinate to the Party’s interests, and Obama concluded that “in my mind, at least, the fates of black and brown were to be perpetually intertwined, the cornerstone of a coalition that could help America live up to its promise.”

During eight years under former President Barack Obama, African-Americans made little progress in the high-immigration economy. “On every leading economic issue, in the leading economic issues Black Americans have lost ground in every one of those leading categories,” radio host Tavis Smiley said January 2016. “So in the last ten years it hasn’t been good for black folk … the president’s most loyal constituency that didn’t gain any ground in that period,” he said.

Nteta’s study, titled “United We Stand? African Americans, Self-Interest, and Immigration Reform,” was published in 2013. But it was ignored by the many affluent progressives and establishment Republicans who prefer to downplay the massive economic impact of mass migration. One exception was Jamelle Bouie, a far-left writer working for the American Prospect. He wrote shortly before the “Gang of Eight” political disaster in 2013:

Democrats probably won’t have a “black” problem if they go forward with comprehensive immigration reform. What they might have, however, is a working-class problem, as lower-income blacks and whites show resistance to plans for more immigration. Given the Democratic Party’s weakness with working-class whites, that isn’t a huge concern. But losing black voters—even if it’s just a few percentage points—could disadvantage the party in southern states like Virginia and North Carolina, where overwhelming black support is required to stay competitive. A little less enthusiasm, and a few fewer votes, could keep a statewide candidate from reaching a majority.

And indeed, if Republicans are feeling ambitious, this divide could form the basis for outreach to working-class blacks. Historically, Republicans have been able to win 10 percent of African Americans in presidential elections. A return to that performance would make several states—Ohio and Pennsylvania, for instance—far more competitive than they are at the moment. Insofar that the GOP wants to cleave the Democratic coalition, immigration might offer a way to reach one group of working-class voters.

Bouie was proved correct in November 2016, when Trump and his immigration-reform agenda won the White House by winning Ohio, North Carolina, and Pennsylvania, as black national turnout dropped by 9 percent. Trump also gained a greater share of the black vote. There is also some evidence that black turnout dropped more in the area hard hit by cheap-labor migration.

It is not clear if Trump will push his popular immigration-reform agenda in the 2018 election, amid growing hostility from business-first Republicans and from progressives who gain economically and political from a continued inflow of blue-collar service-workers — at least until business manages to import more white-collar professionals.

Every year, 4 million Americans turn 18 and begin looking for good jobs in the free market.

But the federal government inflates the supply of new labor by annually accepting roughly 1.1 million new legal migrants, by providing work-permits to roughly 3 million resident foreigners, and by doing little to block the employment of roughly 8 million illegal migrants.

Polls show most Americans support Trump’s view of America as a nation of Americans, wrapped in a network of mutual obligations.