The city of Sao Paulo fined Brazilian President Jair Bolsonaro this weekend for being out in public without a mask during a public appearance at a motorcycle rally that attracted 12,000 vehicles.

The event, a scheduled religious event titled “Accelerate to Christ,” invited motorcyclists to circle the city and reportedly generated funds for food donations. It was not officially a Bolsonaro event, but the very publicly Christian president attended as a special guest.

Bolsonaro has previously participated in motorcycle runs in Brasilia, the nation’s capital, and Rio de Janeiro, where he boasted his supporters had organized the largest motorcycle rally in the history of the country.

Bolsonaro, who himself tested positive for Chinese coronavirus last summer, has insisted on refusing to wear sanitary masks and encouraged his supporters to support small businesses and oppose economic lockdowns. Brazil’s government functions under a federalist system, which means Bolsonaro does not have the power to prevent regional governors from imposing their own policies. Sao Paulo Governor João Doria, often branded a potential rival to Bolsonaro in the 2022 presidential race, has imposed one of the strictest lockdown regimes in the country and insisted on fining the president or any supporters for violating the mask mandate in the region.

According to Brazil’s UOL, Sao Paulo police fined the president 552.71 reias ($108.88) for the transgression. The notice against Bolsonaro reportedly read in part, “At this moment when non-pharmacological measures are essential for the prevention and control of the pandemic, the use of a face mask is widely recommended by the international scientific community.”

In reality, the use of masks outdoors, particularly non-medical cloth masks, is the subject of widespread controversy in the scientific community. Some, the leftist newspaper New York Times noted in April, recommend masks outdoors only in crowd settings or places where distancing is impossible.

“I think outdoor masks should not have been mandated at all,” one medical expert told the Times. “It’s not where the infection and transmission occurs.”

Sao Paulo’s strict coronavirus measures did not appear to impact the size of the crowd at the outdoor event Saturday, which the left-wing Folha de Sao Paulo reported was several times larger than what organizers had originally intended before Bolsonaro confirmed his attendance. The newspaper noted that organizers counted as many as 12,000 motorcycles and police deployed 6,300 officers to keep the peace, though no reports of any disturbances tied to the event ultimately surfaced. The conservative site Terça Livre reported, citing event organizers, that 400,000 people registered to attend the event on its website and many gathered along the side of the road to cheer on the bikers.

UOL, another Brazilian outlet, quoted some in attendance who said it was impossible to rent a motorcycle in the city for the time of the event due to the overwhelming demand. A Bolsonaro supporter identified as Cris Souza said she attended only by foot because she could not find a place with a spare motorcycle to rent.

“I really admire this man, I feel he’s sent by God to help us get out of this crisis,” Souza told UOL. “Imagine if he orders everything closed – as a hairdresser, I would starve to death. I love motorcycles, we are also bikers, we tried to rent one to participate in the motorcycle but we didn’t have any more.” 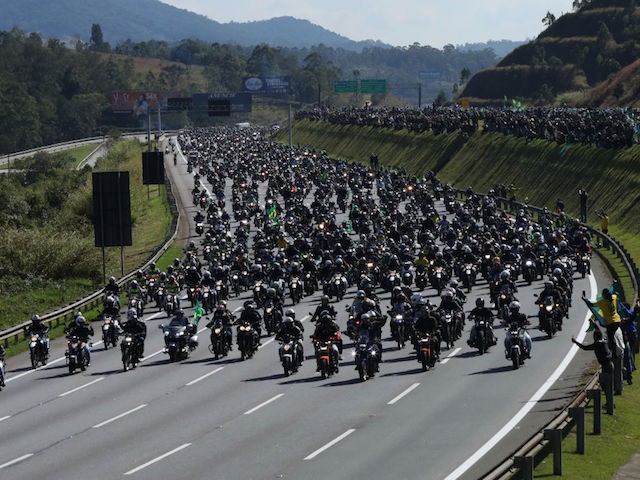 President of Brazil Jair Bolsonaro rides a motorcycle as he leads supporters during a motorcycle rally through Rodovia dos Bandeirantes of Sao Paulo on June 12, 2021 in Sao Paulo, Brazil. (Photo by Rodrigo Paiva/Getty Images) 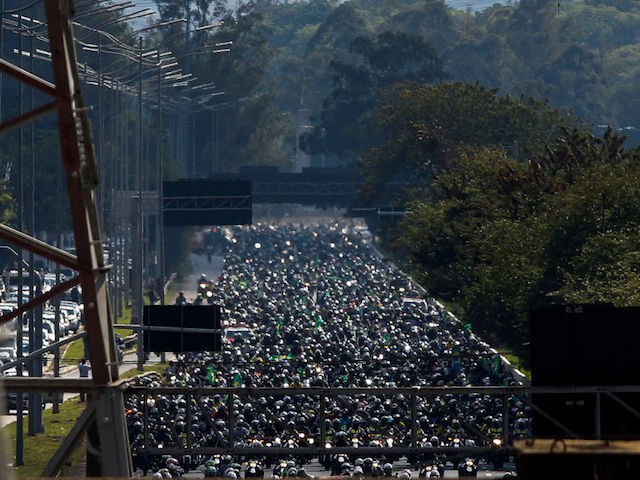 Aerial view of a motorcade led by Brazilian President Jair Bolsonaro during a rally with supporters in Sao Paulo, Brazil, on June 12, 2021. (MIGUEL SCHINCARIOL/AFP via Getty Images) 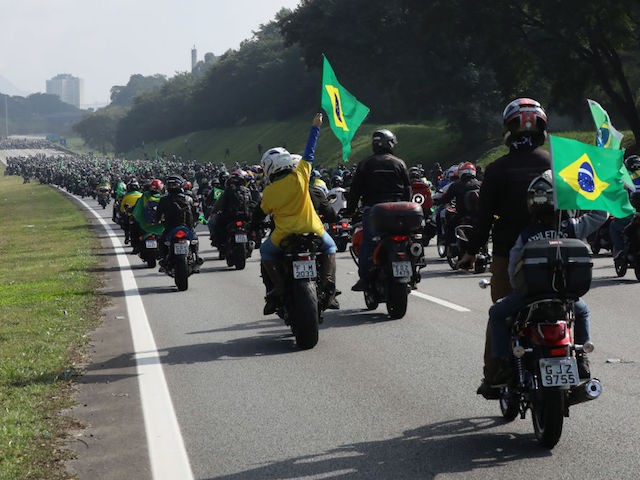 Bolsonaro concluded the event with some remarks thanking the crowd for their attendance and notably attacking Doria for his insistence on limiting freedoms in the state. The next day, Doria attacked Bolsonaro in an announcement promoting Sao Paulo’s vaccination program.

“In São Paulo, we are going to vaccinate. This is not the land of chloroquine, this is the land of vaccines,” Doria said in the address, attacking Bolsonaro for his repeated promotion of the use of chloroquine and hydroxychloroquine to treat coronavirus infections – a topic of contentious debate in the medical community.

Doria went on to declare that Bolsonaro’s “criminal attitude” was responsible for Brazil’s high death and infection rate and dismissed the Bolsonaro administration’s work in acquiring vaccines as “no help, it’s an obligation.”

Sao Paulo officials appeared to document only the number of vehicles in attendance at this weekend’s event, not the number of people, so comparing to past events is difficult. The Rio de Janeiro motorcycle caravan Bolsonaro attended in May attracted as many as 15,000 people. The president himself speculated it could be the largest event of its kind in the history of Brazil, though police did not confirm the claim. Rio de Janeiro also had a coronavirus mask mandate in place at the time of the event but did not enforce it, and Gov. Cláudio Castro welcomed Bolsonaro personally upon his arrival to the state.

Bolsonaro led a similar event in May in Brasilia to celebrate Mother’s Day; the Rio and Brasilia events were officially Bolsonaro events, as opposed to the Sao Paulo event which Bolsonaro attended as a guest.

Leftists have largely failed to replicate the numbers that conservative Bolsonaro events have attracted. Notably, Bolsonaro supporters held anti-communist events on May 1, a Marxist holiday known internationally as “May Day” or “Workers’ Day,” that outnumbered those planned by Brazilian leftist groups.

Bolsonaro, according to Folha, mocked the small number of people at a leftist protest on May 28 by claiming that police were “seizing a lot of marijuana in Brazil,” so “there was no weed for the movement” to attract its usual supporters.