Brazilian President Jair Bolsonaro took to the streets of the nation’s capital, Brasilia, on Sunday for a motorcycle ride attended by hundreds in honor of Mother’s Day.

Bolsonaro, an avid biker, also told reporters the event was part of Brazil’s attempts, “little by little,” to declare victory against the Chinese coronavirus pandemic. Brazil has documented more deaths attributable to Chinese coronavirus than any other country but the United States – not including the estimated real death tolls in rogue states like China and Iran – and over 15 million cases and counting as of Monday.

Bolsonaro remains one of the most vocal opponents on the international stage of using economic lockdowns to prevent the spread of the Chinese coronavirus. While lockdowns have occurred throughout Brazil, as governors have the power to impose them without presidential approval, Bolsonaro has urged his supporters to denounce and protest them by supporting their local businesses and attempting to live normally.

Bolsonaro posted videos of the motorcycle event to his social media accounts, where he thanked mothers, fellow bikers, and police for making the event possible. The videos show the president accompanied on a ride around the capital by hundreds of people also on motorcycles. While the occasion was a mass event, it occurred entirely outside and those participating wore helmets, many with face shields built in, making it an unlikely candidate for a coronavirus superspreader event.

“Long live our freedom!” he wrote as a caption.

Brazilian media reported that the event occurred on Sunday morning and lasted for about an hour. Accompanying Bolsonaro were at least one lawmaker, Hélio Lopes of Rio de Janeiro, and Defense Minister Walter Braga Netto. Many of those in attendance were veterans or current members of the military. One participant, 66-year-old Carlos Toledo, told reporters he was present in gratitude for “all that they have done in these two years to rescue Brazil” (Bolsonaro became president in 2019).

Following the ride, Bolsonaro stopped to take photos and shake hands with the public – an act that has become a symbol of defiance to the Bolsonaro administration as public health officials have increasingly frowned upon human interactions occurring without the wearing of sanitary masks.

“We had an extremely grave problem last year, something nobody expected, the pandemic, but little by little we are triumphing,” Bolsonaro said at the event. “You can be sure: as commander-in-chief of the Armed Forces, my military will never take the streets to trap you in your homes.”

On Twitter, sharing a photo of the event, Bolsonaro wrote, “Those who want to see the people distant from me, or who expect me to be distant from the people, should give up. I am and will be with them to the end. Good night to all!”

The Argentine outlet Infobae reported that Bolsonaro supporters have already planned another “mass event” for the president on May 15, but did not elaborate on the nature or location of the event.

Thousands of supporters nationwide – including in major cities like Sao Paulo, Rio de Janeiro, and Brasilia – took the streets last weekend on Bolsonaro’s behalf, as well. Many used the occasions for public prayer for Bolsonaro, a vocal Evangelical Christian. Others shouted slogans like “end communism” or expressed opposition to coronavirus lockdowns. The display was of particular significance to the Brazilian right because of the recent decision by the nation’s supreme court to allow socialist former President Luiz Inácio Lula da Silva to run for office again, setting up a showdown against Bolsonaro in 2022.

Lula polled as the frontrunner in the 2018 election for much of the time leading up to the vote despite being on trial facing charges of million-dollar money laundering during his prior term as head of state. He was convicted and sentenced to over a decade in prison for allegedly using taxpayers’ dollars to buy himself a luxury beachfront property. 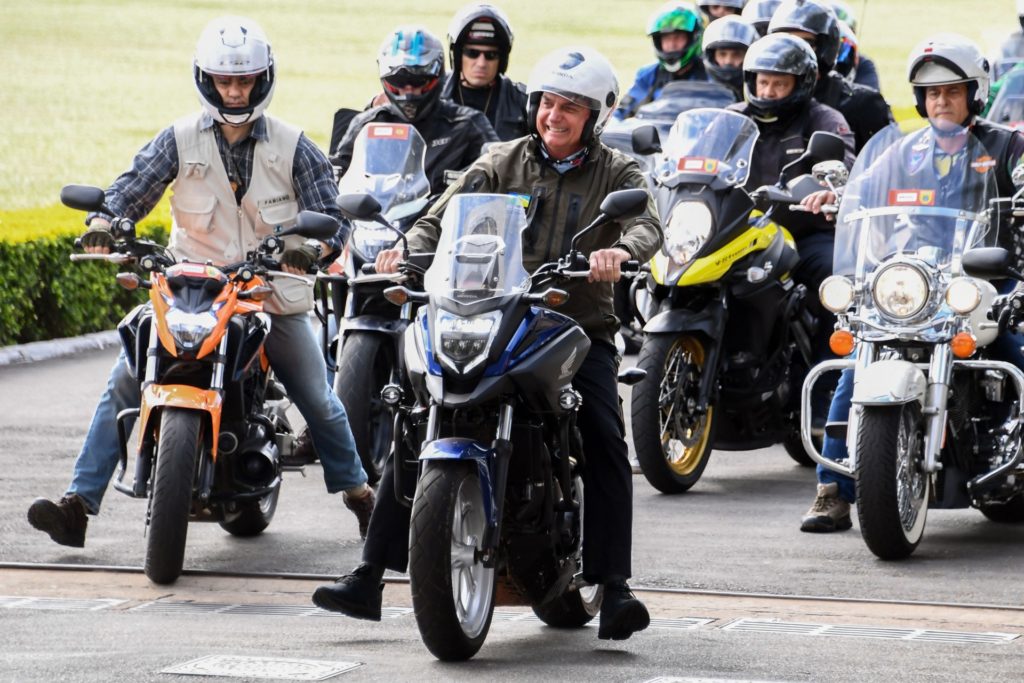 Brazil’s President Jair Bolsonaro rides a motorcycle as he leads a caravan of more than 1000 bikers to celebrate Mother’s Day in Brasilia on May 9, 2021. (EVARISTO SA/AFP via Getty Images)

The accusations surfaced as part of “Operation Car Wash,” a legal probe into an elaborate, multipartisan corruption scheme in which the Brazilian contracting firm Odebrecht gave politicians of many parties kickbacks in exchange for overpriced government infrastructure projects. Operation Car Wash resulted in dozens of arrests of lawmakers, the fall of at least two presidents (Lula and his former Energy Minister, Dilma Rousseff), and the election of Bolsonaro.

The Supreme Court, dominated by Lula appointees, remanded the convictions against Lula this year, claiming that the judge that processed his cases, former Justice Minister Sergio Moro, was biased.

Lula may again be convicted before 2022, banning him from running, but currently remains a viable presidential candidate despite his advanced age at 75.