The Communist Party organized multiple mass assemblies, including one apparently mimicking the practices of anti-regime protesters, throughout this week to honor the memory of dictator Fidel Castro on the five-year anniversary of his much-anticipated death.

Hours of speeches, military assemblies, lines of “mourners” assembled at his tomb, and a night time candlelight vigil formed just part of the program of events organized by the Party, still controlled by the Castro family, between Tuesday and Thursday. Local independent journalists reported a marked “lack in popular enthusiasm” over the events that the regime tried to drown out by placing megaphones on street corners blaring old Castro speeches and other propaganda.

The official newspaper of the Communist Party, Granma, falsely declared in various propaganda articles that Fidel Castro “is alive” and remains an obsession of Cuban youth. In reality, young Cubans, many of them minors, participated in widespread protests both on July 11 and November 15 across the island that resulted in their arrests and abuse at the hands of police. While no concrete sum of minors detained for political activity in Cuba is available as the Castro regime denies keeping prisoners of conscience, the estimates from human rights groups range in the dozens.

Young people walk with posters and Cuban flags along a Havana street during the 5th anniversary of Fidel Castro’s physical disappearance, on November 25, 2021. (YAMIL LAGE/AFP via Getty Images)

Among the events held this week, the Castro regime armed forces organized a candlelight vigil attended by some of the highest-ranking members of the Party. The event, despite apparently being meant as a military homage, featured multiple dance troupes.

“He was there,” Granma reported of “dream maker” Fidel Castro, who is dead.

“Because Fidel is alive, because he is and will continue to be the soul of the nation, and his legacy goes beyond generations currently present,” an effusive Granma declared. “It was an homage to he who they call the eternal walker, the dream maker, my Commander.”

The Communist Party flooded the University of Havana with seemingly hundreds of people for another event on Tuesday night, despite the ongoing and increasingly critical Chinese coronavirus outbreak in the country. Leaders of the event forced attendees to chant “I am Fidel” and “long live socialism,” among other mottos.

On Thursday, in Castro’s native Santiago de Cuba, the regime organized long lines of “mourners” wearing pro-communist t-shirts and other paraphernalia to lay flowers on the large boulder that serves as Castro’s grave.

The regime also inaugurated the “Fidel Castro Ruz Center” to promote worship of the late dictator on Thursday at an event Raúl Castro, Fidel’s younger brother and fellow dictator, called “the most moving thing I have seen in my life.” Castro claimed to have cried during a children’s performance honoring Fidel at the event.

The outsized programmed events did little to obscure the national discontent that made headlines around the world this summer after nearly 200,000 people in nearly every city on the island took to the streets in protest on July 11. While international coverage waned on the ongoing protest movement in Cuba following the July protests, dissidents have continued organizing assemblies and are currently in the process of convening a “national strike” meant to prevent the Castro regime from continuing to economically exploit the Cuban people.

The Castro regime denounced the November protests as the creation of “a violent and interventionist right wing” and “people who work for a foreign government with the goal of setting up a coup agenda to change the political system.” Granma presumably meant the United States to be assumed the foreign government in its accusation.

Often-detained Cuban journalist Luz Escobar noted in the independent publication 14 y Medio on Thursday that one of the many events the regime organized appeared to be an attempt to copy the November 15 protest, in which dissidents called on civilians to peacefully take the streets wearing white and holding flowers. 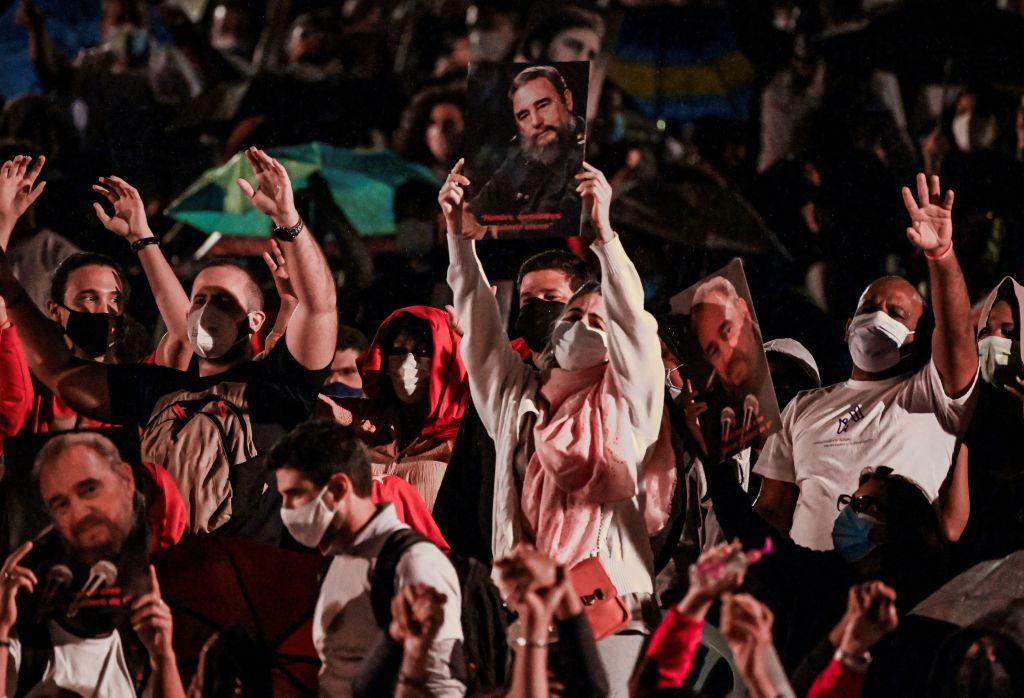 Young people hold up posters of Cuban late leader Fidel Castro during the vigil for the 5th Anniversary of his physical disappearance in Havana, on November 24, 2021. (YAMIL LAGE/AFP via Getty Images)

One dissident, the now-exiled “artist” Yunior García, had attempted to wear white and walk around town holding a flower on November 14 and was allegedly prevented from doing so before fleeing to Spain (García’s flight did not stop dissidents, particularly members of the Catholic clergy, from marching the next day).

Escobar reported that the “Walk for Fidel” was organized to take the exact same route that García had announced he would take and called fo the same dress code.

“Another commemorative signal occurring on Thursday was the placement, in some neighborhoods of Havana, of loudspeakers at full volume with the voice of the deceased giving speeches,” Escobar reported, “accompanied by Silvio Rodríguez songs and all the musical repertoire that throughout the years has accompanied the official acts of the regime.”

Communists also forced children in schools to participate in the mourning, writing “#IAmFidel” in chalk in playgrounds or forcing them to write essays “in honor of Fidel.”

Escobar noted that the government efforts failed to obscure that “the streets show less enthusiasm every year to commemorate the death of the architect of the Cuban Revolution.”