A crowd of protesters attacked and assaulted a Black man who claimed to be a veteran. During the disturbance that lasted nearly ten minutes, the crowd is seen assaulting the man multiple times and at one point they steal an American flag from him.

“It’s going down in Los Angeles right now,” Kitty Shackleford tweeted with a video showing part of the attack.

It’s going down in Los Angeles right now. Looks like a Patriot being assaulted by a group of ideas (Antifa) for having an American flag. Supposed to be some graveyard protest. Link in tweet below for live. https://t.co/RfJqw5qv4w pic.twitter.com/x9HijGDrtE

This skirmish broke out during a Say Their Names Graveyard Protest in Los Angeles on Saturday afternoon.

The full video shows the crowd surrounding the Black man and dragging him down the street. They eventually get him up against a car where a man wearing black bloc comes up behind him and steals his U.S. flag.

The man pushes through the people surrounding him and eventually takes back his flag. The crowd continues to swarm around him and assaults him multiple times, the video shows.

At one point, the victim shouts, “This is America. I served my country. I bled for my country.” 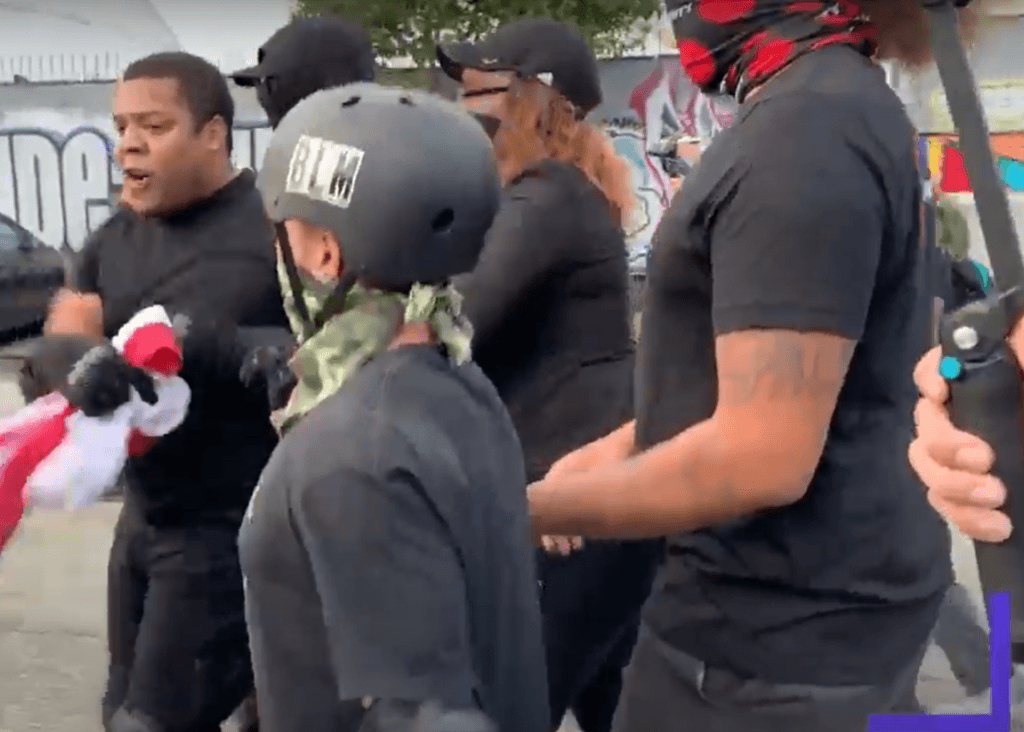 The crowd appears to be restraining the man to keep him from going where he wanted to go. It is unclear what started the confrontation.

The man eventually moves with the flow of the crowd and tries to escape. The crowd continues to surround him and push him to control his movement.

As the crowd pushes him down the street the man yells out, “I’m a United States citizen and a veteran.”

“I don’t give a f*ck about veterans,” one man yells back at the veteran.

The confrontation continues for about ten minutes before the veteran spots a police cruiser and calls for help.

“Let him play with the cops,” one protester yells. “Let’s go.”

Officers move him to safety behind a cruiser and eventually drive him away.