Bodycam footage released by the Metropolitan Police Department of Washington, D.C., shows the moped driven by Karon Hylton crashing into an SUV and was not struck by the police car. The video counters the activist narrative that a police vehicle pushed Hylton into the path of the SUV.

Metropolitan Police released the promised bodycam videos showing officers following Hylton with emergency lights activated. In the driver’s video, the speedometer indicates the officers were following Hylton at about 30 miles per hour and were a safe distance behind the moped. 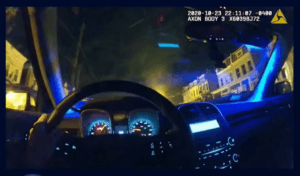 As Hylton exited the alleyway, he pulled into the path of an oncoming SUV. The SUV struck Hylton and appeared to keep driving a few hundred yards down the block where other responding officers stopped the vehicle. It is not clear if the driver was attempting to flee the scene.

Officers attempted to stop Hylton after spotting him driving the electric Revel moped on the sidewalk along Kennedy Street NW. He was not wearing a helmet.

Police say officers performed first aid on Hylton until an ambulance arrived on the scene. The ambulance transported Hylton to an emergency hospital. Doctors later pronounced Hylton dead as a result of his injuries sustained in the crash.

In the video, officers are seen checking on the well-being of the driver of the SUV. There did not appear to be any injuries.
Local residents say they believe the police cruiser drove into the moped and “pushed him into the oncoming traffic,” Breitbart News reported.

“Tell them to release the body camera footage,” a man told a WUSA9 reporter.

Three nights of protests that followed Hylton’s death led to the injury of at least 14 police officers including one who lost eyesight as a result of being targeted by a laser.

Other officers sustained injuries when protesters threw an explosive fireworks device into a line of police officers.