Portland Police Bureau officers surrounded and temporarily detained about 100 Antifa protesters after they vandalized multiple businesses in the Pearl District. Police identified and photographed all of the protesters, and some journalists, and placed 13 people under arrest.

Portland police report a group of people began marching in the street and blocking traffic at about 9 p.m. on Friday, according to a statement from police officials. Officials advised the protesters to get out of the open roadway. The group refused to comply and began marching down the roadway.

About 15 minutes later, the crowd turned violent and began smashing the windows of local businesses. At that point, officers moved in and “kettled” the crowd. The police informed the group they were being temporarily detained and were “not free to leave.” Police began to identify and photograph the people in the detained group.

“This is a temporary detention, we will be removing you one at a time” Portland Police make an announcement as they kettle a crowd of around a hundred after several windows were smashed #Portland #PortlandProtests pic.twitter.com/OmX7bKJotJ

Journalist Suzette Smith tweeted a photo showing a police officer taking her picture after duct-taping her name and date of birth on her chest.

I left the kettle because a protester started yelling at me.
Police demanded my name and birthdate, wrote it on a piece of duct tape and gave it to me to put on my chest. Then they photographed me without my mask on. Here’s a photo of the officer taking my photo. pic.twitter.com/zTM8QOb6Ae

Police later “courteously escorted” her about a block away where she could no longer report on police or rioters’ activities.

Police officials said they detained the largely Antifa protesters for “investigation of crimes.” Some in the crowd refused to comply and were arrested. Police said the group locked arms in an effort to interfere with their investigations. 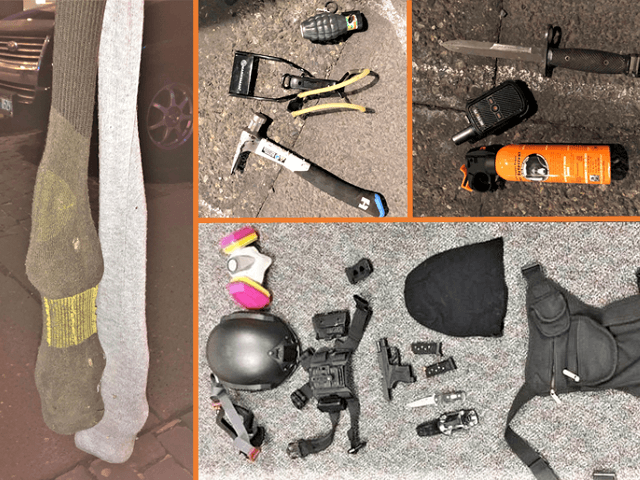 During the process, police took 13 people into custody. After releasing the other protesters, police searched the area and found vandalism tools and weapons that had been discarded by the protesters. Those included a crowbar, hammers, bear spray, slugging weapons, a high-impact slingshot, and knives.

Protesters and onlookers gather on 13th and Marshall, one block down from where the initial kettle began. The crowd chants,” let them go” as music blares in the background#pdxprotest #Portland #oregon #portlandprotest #BLM #PDX #BREAKING pic.twitter.com/PZHQqUzJ3Q

Groups of released protesters gathered outside the “kettle” perimeter and began throwing rocks and full cans of beer at officers, officials stated. Officers arrested some of the crowd including two people carrying firearms and wearing body armor and helmets.

The Portland Police Bureau press release lists the names and alleged crimes of the 13 people they arrested.