Minneapolis firefighters could not save a century-old Catholic church from destruction in a Monday night blaze. Officials say the roof of the church collapsed and the building sustained heavy damage.

The Bureau of Alcohol, Tobacco, Firearms, and Explosives (ATF) is assisting in the investigation of a fire that consumed the Sacred Heart of Jesus Parish church Monday night in northeast Minneapolis, the Minneapolis Star-Tribune reported. The fire began at about 7 p.m.

A video published on Twitter shows flames and smoke coming through the roof of the 100-year-old church. Officials report no one was inside the church at the time the three-alarm fire began. Firefighters rescued a few parishioners who entered the burning church to attempt to put out the fire, WCCO CBS4 reported.

⚠️#ALERT: Fire personnel requesting backup as a large fire consumes a Minneapolis church#Minneapolis l #MN
A large fire continues to burn at the Sacred Heart of Jesus Church. No one is believed to be inside.
Police have requested an arson investigator to the scene. pic.twitter.com/IDWnszIgBb

Breitbart News videographer Matt Perdie arrived shortly after firefighters extinguished the flames and captured the extensive damage of the church. Breitbart News crews were in Minneapolis Monday night covering a George Floyd protest about 3.5 miles away from the church.

As the roof collapsed, firefighters fell back to a defensive position and fought the flames through the roof and bell tower. 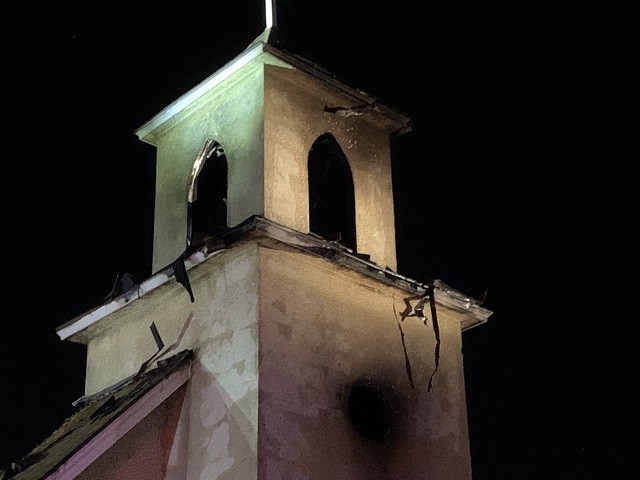 “Because of the construction of the church, the fire spread quickly into the attic area and it eventually burned through the roof, so unfortunately we weren’t able to save this one,” Minneapolis Fire Department Chief Bryan Tyner told reporters. “It’s going to be a total loss, but we were able to avoid any loss of life or any injuries.”

Officials called in the ATF to assist in the investigation into the cause of the fire.