On Saturday, hundreds gathered to protest against Islam’s sharia law at the site of the December 2015 terror attack in San Bernardino, California, and elsewhere throughout the state.

As the Los Angeles Times noted, a diverse group of over 500 demonstrators gathered at the Inland Regional Center in San Bernardino to protest what they described as the spread of sharia law in the United States.

They were met by smaller groups of counter-demonstrators, many from so-called “Antifa” groups. San Bernardino Police Officers handled security without any major incidents, except a few scuffles on the Anitfa side.

The San Bernardino protest was organized by Latinos for Trump co-founders Marco Gutierrez and Denise Ruiz.

Marco, who grew up in Mexico, became a US citizen in 2003, married his high school sweetheart in California, and founded Latinos For Trump in 2016.

Gutierrez told Breitbart News, “We’re here to defend our country, because our way of life is threatened now.

“It’s the totalitarian idea that you’ll do this or else — reminds me of the fight in Mexico between the Catholics and the Masons –so we have some experience with this kind of tyranny.”

Gutierrez added: “The media’s trying to make me decide whether or not my uncle who illegally immigrated to this culture should be deported, or whether my kids should be fed … and I choose that my kids get fed first, and if my uncle didn’t take steps to get his legal status in order, then I’m sorry, you’re going to have to go.”

A 17-year-old whose father is a member of a Tea Party echoed that same sentiment as the San Bernardino rally was winding down.

Another Latino for Trump activist, Irma Hinojosa, told Breitbart News that the Paris terror attacks of November 2015 had provoked her to become involved in politics.

After that, she said, she began researching Islam, read the Koran, and began following Trump, who got into the race and “really resonated with me.”

One thing that deeply offended her was the idea in sharia law that “men are in charge of women.”

Another activist Maria Quinterro, drove up from from Carlsbad.

“We had an event in Oceanside, but I wanted to be at ground zero — at San Bernardino, where the terrorist attack happened — I wanted to support those who lost loved ones here,” she told Breitbart News.

Another Latino For Trump activist, Valentina Bankhead, led a march into the Antifa crowd, which fled, pursued by the police. The protest devolved into mayhem for a few moments. The police dispersed the Antifa crowd, then turned out on horseback to push back the anti-sharia protestors.

Activists came from all over the country to speak out.

Robert, an activist from New York City, described the opposition as “melting snowflakes.”

At the Los Angeles International Airport (LAX) a similar event took place, and once again, the anti-sharia protest crowd outnumbered counter-demonstrators by a huge margin. 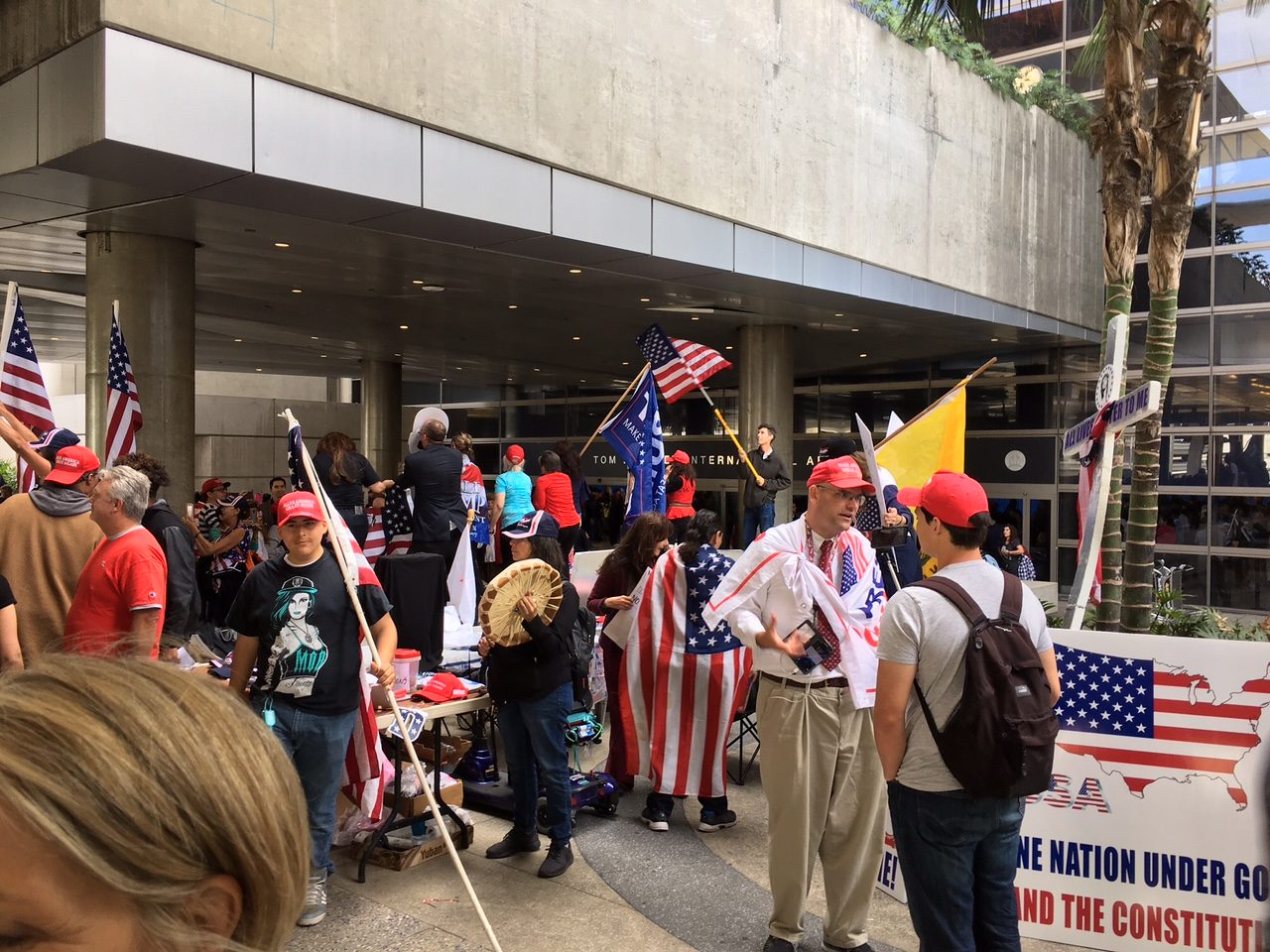 At the Tom Bradley terminal, about 100 activists waved signs, sang songs and networked as a small group of counter-demonstrators chanted from the median about 50 feet away. 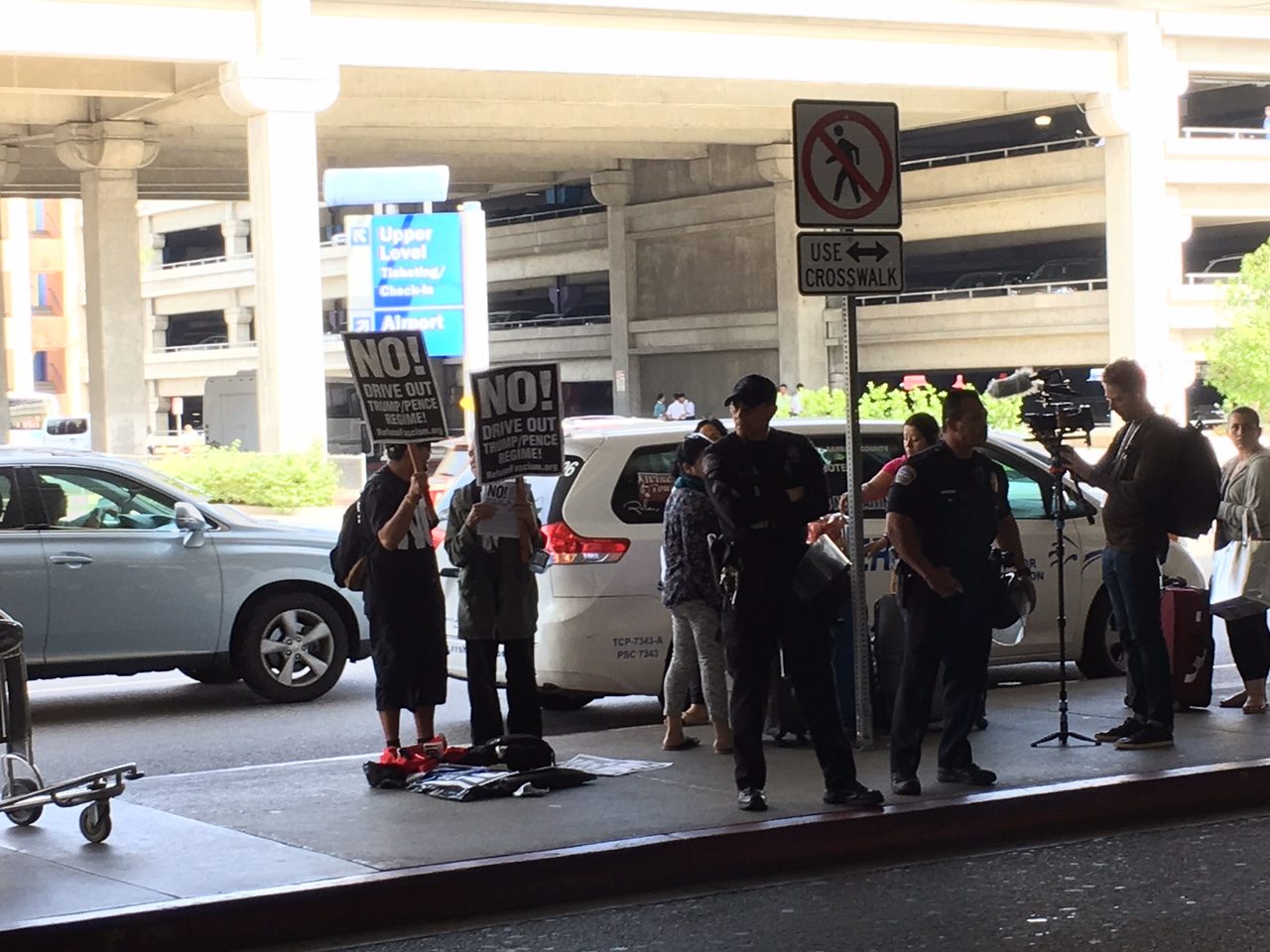 The pro-Trump, anti-sharia protestors engaged travelers as they made their way out of the terminal, taking pictures and talking as a large phalanx of LAPD and LA Airport Police stood vigil.

Harim Uzziel, a Jewish Latino, who has been protesting the Antifa left nationwide, told Breitbart News:

“I actually believed Trump was a racist for the first week — yes, until I heard it from his own mouth — what he had to say,” Harim said.  “At first the rumors put me off, but when I heard what he had to say, I jumped on the Trump Train. It was because of him that I became a hardcore American Patriot.”

Tim Donnelly is a former California State Assemblyman and author who is doing a book tour for his new book: Patriot Not Politician: Win or Go Homeless. He ran for governor in 2014.