TEL AVIV – Palestinian President Mahmoud Abbas’ Fatah party published a cartoon of late president Shimon Peres heading for hell a day before his funeral, which was attended by Abbas.

The caricature portrays a shaking Peres being read an extended rap sheet of his “crimes” against humanity by the Grim Reaper against the fiery backdrop of hell. 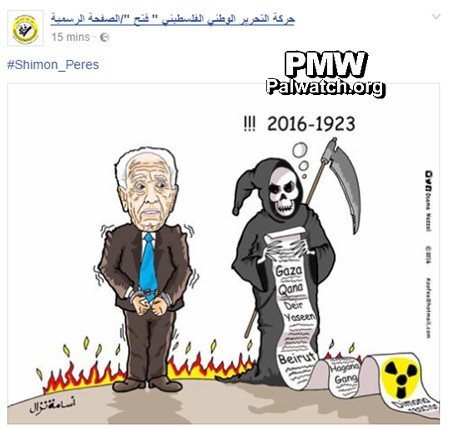 The cartoon, first reported by Israeli NGO Palestinian Media Watch, lists the “massacres” of Palestinians in Gaza, Kfar Qana, Deir Yassin, Beirut, the “Hagana Gang” and Israel’s nuclear program at the Dimona nuclear facility as all being part of the Nobel Peace Prize winner’s many crimes.

A day before, Palestinian Authority’s official TV station also ran an interview with “expert” on Israel affairs Fayez Abbas who described Peres as “the greatest fraud in the history of the Zionist movement… a man that the world undoubtedly loves… the Arab states [also] believed [he] was a man of peace, even though he was the greatest man of war in Israel.”

This flies in the face of a condolence letter sent by President Abbas to Peres’ family expressing his “deep sorrow” over the death of the 93-year-old statesman.

Abbas said Peres was a partner in peace with late PLO chief Yasser Arafat and praised him for his dogged efforts to resolve the conflict until his last breath.

Abbas and four PA officials were granted permission by Israel to attend Peres’ funeral on Friday alongside President Barack Obama, former president Bill Clinton, the Prince of Wales and other heads of state.